Brighton’s Daupe! label scours the hip-hop landscape for gems, putting out deluxe limited vinyl and cassette editions records from Westside Gunn, Conway The Machine and MF DOOM that sell out in minutes. High Leask meets label boss Lawrence Lord, aka the Purist, to understand the philosophy behind a rapidly-growing cottage industry.

Lawrence Lord samples everything. “Every snare, every effect – whether it’s obscure Polish library records or Japanese soundtracks – there’s a record in there,” the London-based producer says. “Hence my name, The Purist. I’m like a sampling purist.” Lord is the mind behind Daupe! Media, a Brighton-based hip-hop label known for its highly sought-after limited vinyl releases. He calls himself a “purveyor luxury rap beats” and cites sample-hungry beatmakers like The Alchemist and Madlib and the rich, emotional soul Bill Withers and Barry White as influences. (The late rapper Prodigy’s Blaxploitation-inspired album Return the Mac also had a particularly lasting impact on his work.)

“That was always my thing, that cinematic, emotional sound,” he says. “I like to take stuff out the context where they’re from – I might take something from a soul record and have Roc Marciano rapping about dealing crack on it. I like that interesting juxtaposition those two kinds styles.” 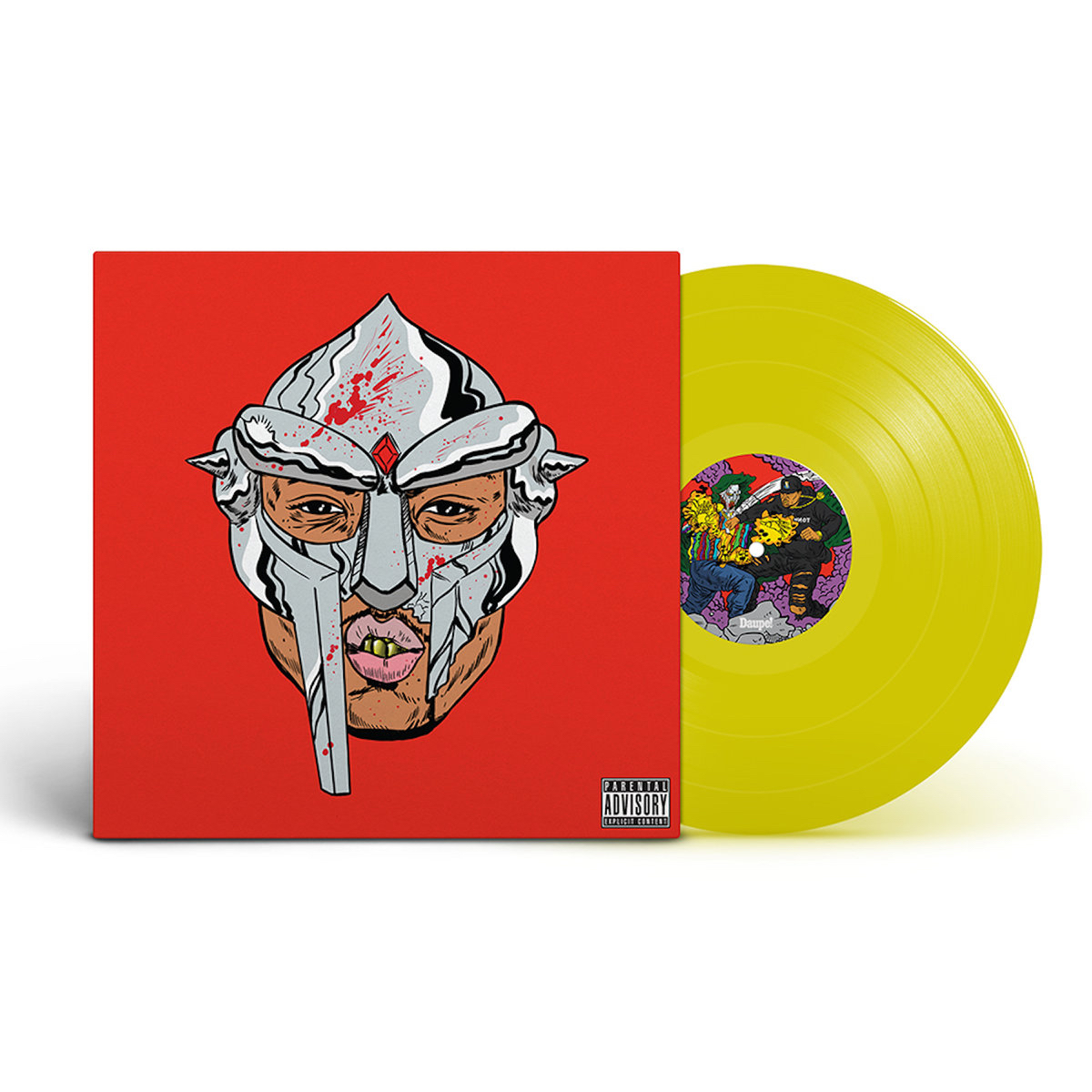 The label’s beginnings involved an inauspicious series back-and-forth email exchanges culminating in its first release, ‘Northern & Roozy’/‘Change’, a 7” produced by The Purist featuring Action Bronson on one side and Roc Marciano on the other. Since then, a steady stream sterling releases by Westside Gunn and Conway The Machine – the hotly-tipped Buffalo pair who earlier this year inked a distribution deal with Eminem’s Shady Records – as well as Hus Kingpin, Your Old Droog, SonnyJim and The Purist’s own material featuring the likes Freddie Gibbs and Danny Brown, has bolstered its reputation further. The label has become synonymous with a grassroots brand true school-adjacent rap that weaves together elements crime noir, luxury goods and haute cuisine, bringing together a loosely-connected, f-the-grid constellation underground MCs.

The business is built around arm’s length-style partnerships with artists in which the label presses up the physical copies for sale on Daupe!’s Bandcamp page, while the artists retain control the masters and publishing. As the pinned tweet atop the label’s Twitter page declares: “We don’t sign artists. We partner with them.”

“While most labels will make someone sign a contract – whether it’s for five, or ten, or fifteen years – I just don’t believe that to be fair on the artists,” Lord says. “For us, it’s merely an agreement to do the vinyl, but the music belongs to them. When I started the entire Purist thing, I was getting fers from labels to put stuff out with them. But I felt labels weren’t actually doing anything beyond paying for the pressing and a bit marketing expertise, and that I should just do it myself.”

Invoking memories storied rap labels such as Def Jam in the ’80s, Rawkus in the ’90s, and Stones Throw in the 2000s, when a company logo served almost as a seal–quality Kitemark guarantee on the back a record, Lord believes that building confidence in the label through its roster has allowed it to steadily build momentum and increase its prile. “Though it’s not about the brand per se – it’s about the artists and their music – the idea is to build a trust and a belief, so that people will say, ‘Oh, that record is coming out on Daupe!? Then it must be good’.” 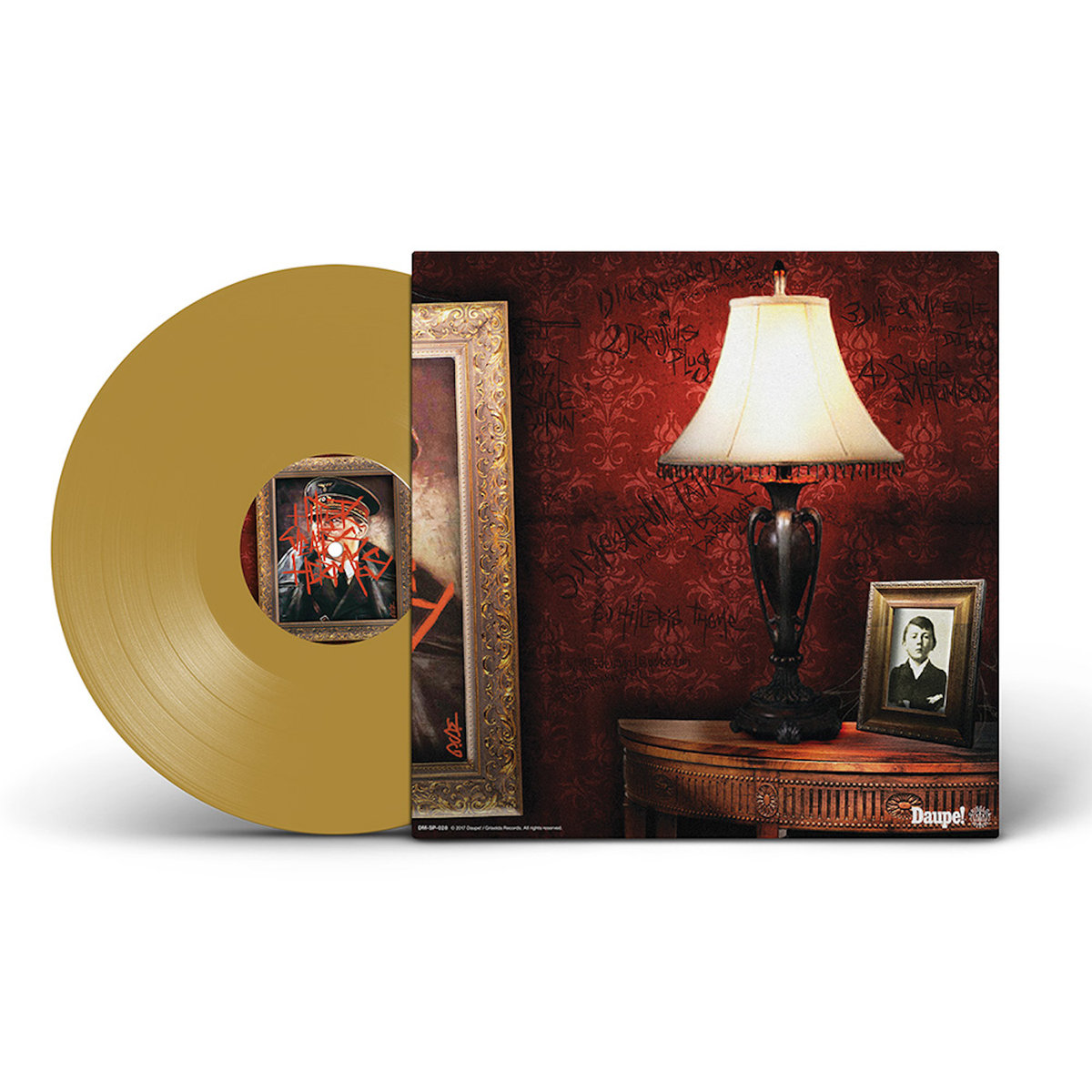 This perspective is borne out the fanatically loyal cult following Daupe! has attracted, to the point where the window availability for its monthly drops has increasingly narrowed. To wit: this past November its most recent release – WestSide DOOM, a limited collaborative 12” by Westside Gunn and enigmatic underground rapper MF DOOM – sold out within a minute going on sale.

“The vinyl normally now goes in about 60 seconds, and the tapes go in about a minute or two. People are clicking refresh, and Bandcamp ten crashes. People get angry about it, but even if we had a bespoke-built website it wouldn’t be any better,” he says. As a result this surge in interest, the Discogs and eBay resale market has seen Daupe! releases spike in value: copies Westside Gunn’s 2016 debut album FLYGOD have exchanged hands for several hundred pounds on Discogs, while the Japanese obi-strip version The Purist’s Pyrex Scholar LP sold for $550 earlier in 2017.

Against this backdrop inflated resale market prices and a supply firmly outweighed by demand, Lord readily acknowledges how difficult it is for fans to obtain the label’s releases at this stage. But he stresses that the initial limited numbers were never intended to make the records hard to get.

“When most the stuff first came out, that’s just how many we sold altogether,” he explains. “It’s only now that the run Hitler Wears Hermes II the first Westside Gunn release on Daupe!, limited to some 250 copies] seems small, but back then people didn’t want to buy it. It took a long time to sell all the copies. There’s a misconception that people are going on Bandcamp and buying 10 copies a release. You might have one guy who buys five copies max, but it’s very rare. But what are you going to do – not let people buy them? That’s not how the world works.”

He continues: “In the digital era where people hold no real value towards music anymore, the idea paying £20 for a physical piece vinyl may seem ludicrous. That’s why I wanted to make it special – for it to look, feel, and sound amazing – and doing it in limited numbers makes it feel more special. If you have some Air Force 1s, and they’re one only a thousand pairs made, it adds something to the ownership it.”

This philosophy also underpins the company’s approach to its artwork, handled collaboratively by Lord and Daupe!’s art director Mr Krum. 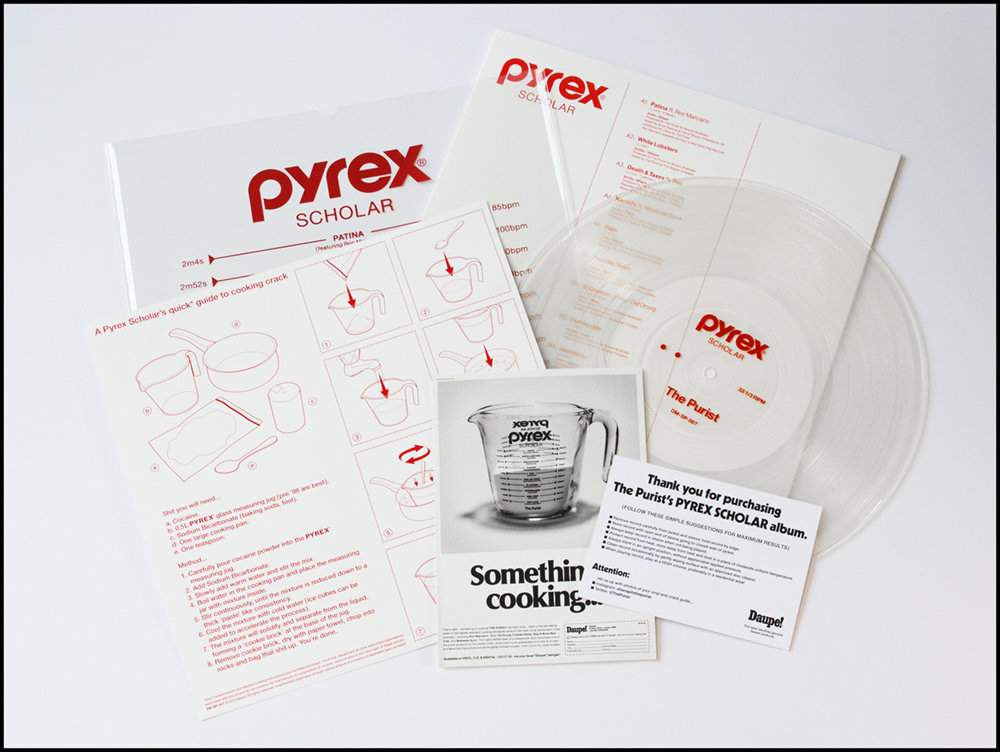 “If you’re wanting people to pay for something physical, then you have to make an effort to do something different,” Lord says the striking design package for his Pyrex Scholar album, which comprised a clear vinyl disc, a Pyrex kitchenware-inspired cover and a crack cocaine recipe on the inner sleeve. “People don’t put any effort into artwork anymore, but the Pyrex Scholar sleeve took us a year to get right. We had so many ideas going back and forth, then we hit the idea with the guide to making crack cocaine.” He also reveals how Pyrex were sent a copy the album as a way to try and get their attention, though feedback was ultimately not forthcoming. “They don’t care – they’re too big and making too much money!”

Turning to future plans, he adds: “We now want to make more bespoke products at the label, as opposed to just licensing them,” pointing to his work with Birmingham-raised, London-based rapper SonnyJim which was produced and art directed entirely in-house. “We just want to keep going, finding quality artists who are making quality art, and give it a home on vinyl that it deserves.”

Reflecting on this point, Lord says: “Most people who get signed to a major now will typically have built their own buzz already. But I think people are aware now that there’s no need to sign a deal anymore. Chance The Rapper hasn’t signed a deal. Freddie Gibbs is independent. But these people are doing well – they’re out there touring, 100 dates, earning twenty grand a show. While really Danny Brown isn’t on a major, he’s still a superstar. Does he need a major? Are majors even relevant anymore?

“If you haven’t got an infrastructure, if you can’t write an email, or can’t do rudimentary maths, or conduct yourself in a good business way, then get a record deal. If you want to stay in bed getting stoned all day, get a record deal. But if you’re willing to put a bit work in and make four times the money, just do it yourself. That’s my mentality.”

Hugh Leask is a freelance writer. Find him on Twitter