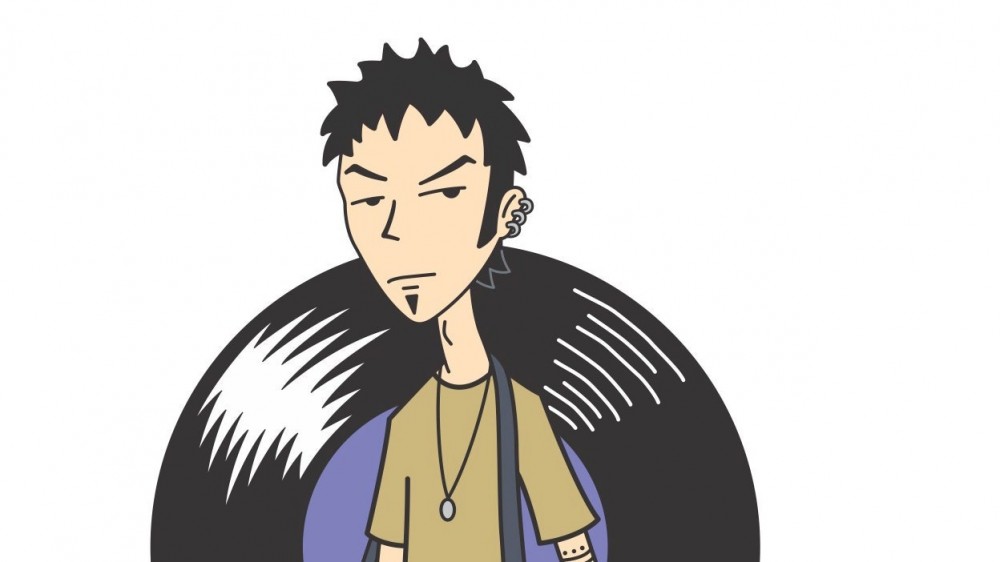 Is it wrong to be in love with a cartoon? Whether it is or not, I know I am not the only one in my obsession with Trent Lane from the MTV animated series Daria, a lanky, guitar-playing dude who still lives at home with his parents. The series, which ran between 1997 to 2002, focused on the high school student Daria Morgendorffer with a painfully blasé attitude, who was stuck in Lawndale-wherever. Her nihilism is cut by the fact that she has a big crush on her best friend Jane’s brother, Trent. When I posted a photo of him on Instagram, the comments that followed were a slew of hearts and “first crush” comments.

And who doesn’t adore Trent? He reminds us of youth, longing, and backseat summer love. He is the ultimate high school dreamboat for alternative ladies, an archetype of the kind of crush that only exists in grades 9-12. A guitarist for the band Mystik Spiral, Trent is stretched out like Gumby, with a scruffy ‘do and healthy sideburns. His facial hair is intoxicating, too: It goes from four scraggly hairs on his chin to eventually a perfectly symmetrical triangle of a goatee. He has two really bad tattoos that encircle his thin-thin biceps. I want to squeeze them.

Trent also comes off as lazy and a major stoner. (Despite being in his early 20s, he still lives at home.) It’s the late ’90s and early 2000s, so you know he has a lava lamp in his room. There’s also probably a poster of Jane’s Addiction in there. (My colleague and fellow Daria fan Senior Fashion Writer Janelle Okwodu specifically notes: “It’s a Ritual de lo Habitual one.”) His voice is deep yet nasally, and he talks like he is always just waking up, probably because he is.

As for Trent’s look, it’s timeless and fits the vision of a dream alternative high school dude. His shirt is baby food green, his pants are concrete gray with a rip in the knee, and he’s always wearing rings, a wristband, and a pendant necklace. In a way, that slept-in aesthetic gives me Raf Simons spring 1998 vibes, with the low-slung pants that are so loose they look like they are going to fall off. (Some of the models in that show went shirtless, which is entirely believable for Trent to do while playing the guitar on stage.) I also envision a fashion-minded Trent in a slew of tank tops from the spring 1998 collection of Helmut Lang. 1997 seems like a fitting year for Trent on Daria and also lackadaisical-hot dude fashion.

The look fits right in with Trent’s personality and is a mirror for him. Trent might come off as too cool, but he knows his effect. With Daria, he’s emotionally in tune with her—helping through guy problems—while remaining romantically out-of-reach. Stab me in the heart once again. He’s the type of guy who you want a mixtape from, and would probably make you one because he’s too broke to get you anything else. You’ll listen to it every day.