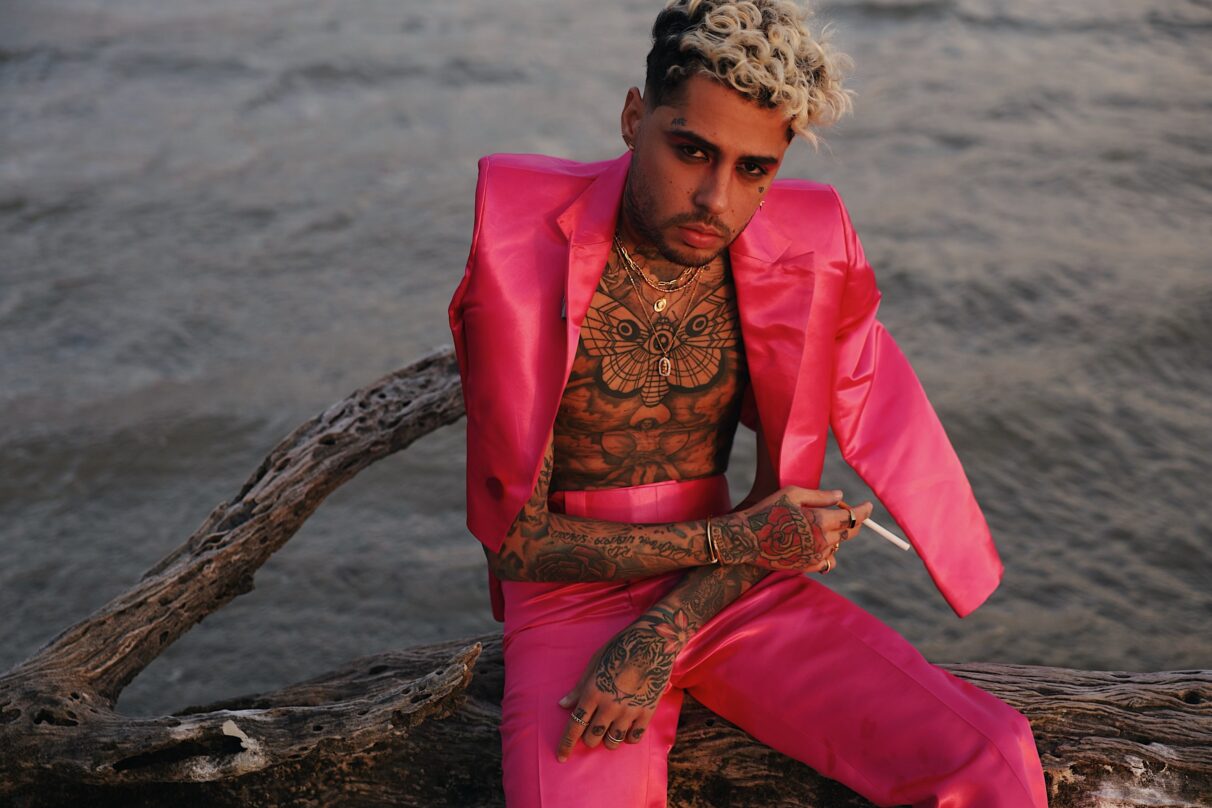 Ahead of his third solo album, Unisex, the Puerto-Rican singer Dalex goes back in time with his “Máquina del Tiempo.” The single sounds like a retro ‘80s sci-fi movie soundtrack from the first stomped kick to the last analog synth effect. Not only Dalex and his peers, Rauw Alejandro and Lyanno, sing about lasting love and technologic fantasies, but they also rhyme over beats that seem to be taken from outer time and space. Once you hit the play button, it’s hard not to think of recent top-chart tracks like The Weeknd’s “Blinding Lights.” But going back in time will always be a great source of inspiration for pop music. — Felipe Maia

When Arca said in May last year that her upcoming album KICK ii would be “heavy on backbeats, vocal manipulation, mania, and craziness,” she probably had her two new singles in mind. Co-produced and co-written by fellow Venezuelan artist Cardopusher, “Prada” and “Rakata” are both atmospheric-but-pounding reggaeton-inspired numbers, softer than “KLK” but equally effective. Two separate songs, they both also share a core concept: sex. The former celebrates what she calls “psychosexual versatility,” while the latter is more straightforward in its quest to make love to the whole world. — Cheky

The thrill of an affair is probably its most alluring aspect, so when Puerto Rican singers paopao and Omar Courtz trade verses about starting an illicit seduction together, things get hot pretty quickly. Driven by a dembow beat is perfect for both bedroom activities and parties where people can get down to perreo until dawn. After the thrill is gone, the hooks in “Ascensor” will remain echoing in your head. — Marcos Hassan

“The city is shaking, the city is shaking,” warn Colombian quartet Cruel Cruel on “D70,” the ominous, trigger-ready closer from their highly anticipated debut album Incendios, out now. Loaded with ethereal dream pop and post-punk grit, the record explores the conflict between people and institutions, concluding in a violent, cathartic crescendo echoing urban exhaustion and the plight of Colombians resisting in the street every single day. — Richard Villegas

The search is still on for a cure for the blues, but in the meantime, singing your heart out about them seems to do the trick. In “Supersad” the lyrical waxing comes courtesy of Georgel and Marcos Mares, by way of Mexico, while Colombian band Diamante Eléctrico backs them up with a soulful groove. Georgel’s brand of R&B comes right as the genre’s ascension in Latine music circles is stronger than ever, and this song’s reflection on the value of appreciating someone when they’re glum is sure to connect with new listeners. Being down shouldn’t mean being out. — Juan J. Arroyo

Bringing together artists from countries as distant as Costa Rica and France, the Argentinian producer Lagartijeando has managed to meld a global and breezy soundscape in his latest album, La Tercera Vision. One of the highlights is “Onda,” a song featuring Brazilian guitarist and singer Tagua Tagua. The downtempo track is crossed by airy vocals and melodic synth-flutes, a new take on chillwave that leaves the piano keys in the background while the drums set the pace for an irrefutable dance. — Felipe Maia

KAINA – “Anybody Can Be in Love”

While we prepare our hearts to the beautiful avalanche that’s going to be KAINA’s forthcoming Sleater-Kinney- and Helado Negro-featuring album It Was a Home, the Venezuelan/Guatemalan-American artist gives us the warm “Anybody Can Be in Love.” The dreamy mid-tempo song puts our heads on its lap and caresses our hair, as KAINA tells us to let our guard down and be open enough to accept love when it comes to us. — Cheky

The world is in flames, but to be honest, not enough is said about the resilient hopefulness that still lives in countless hearts. Peruvian singer-songwriter Mariellé is one of these brave souls, unveiling a delightfully effervescent new single titled “Eternidad,” where bossa nova guitars meet sultry, unassuming R&B vocals that find renewed optimism in a kindred spirit. Here Mariellé delivers an excellent reminder that if life’s big picture gets overwhelming, you can always take a step back to find your center of gravity. — Richard Villegas

Playing fast ‘n’ loose with pronunciation and grammar has always been a cornerstone of rap, and indeed the recipe for many fan-favorite hits. Panamanian reguetonero Akim embraces that approach with “Tusi,” melding words as he serenades the object of his affection. The audaciousness of parking a Ferrari in the middle of a one-bedroom apartment’s living room is surpassed only by his rhyming of “busy” with “music.” Real ones recognize that’s all part of the fun though, and Akim’s clean perreo is made only more endearing by it. — Juan J. Arroyo