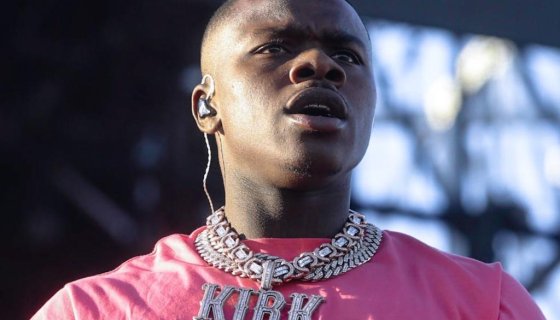 may have experienced a , but after his short jail stint he is showing he’s back to business.

On Saturday (Jan. 4) the “Suge” rapper was after posting $1,500 bond and hopped on his Instagram to not only share news of his release but also share some unreleased music.

”Think ima get back to Charlotte and put a 24 Hour Krispy Kreme Donut Franchise on N. Tryon🤔

No Cap😂,” DaBaby captioned his video.

Think ima get back to Charlotte and put a 24 Hour Krispy Kreme Donut Franchise on N. Tryon🤔 No Cap😂

Flexing several stacks of cash, plays the unreleased track while flossing what many speculate is the $250,000 that was reportedly stashed in the Miami hotel at the time of his arrest.

As , DaBaby was arrested Thursday (Jan. 2) after allegedly, the rapper and his crew stomped out a promoter who owed the artist $30,000, but was apparently $10,000 short when it came to pay up. For the trouble, he allegedly caught the proper fade, got his pockets run through and got doused with apple juice. Reportedly, the promoter was liberated of $80, a credit card and an iPhone 7.

The “Babysitter” rapper appeared in court Friday to address a warrant out for his arrest stemming from an incident at the Dallas/Fort Worth Airport last month where he allegedly attacked a food stand employee; but the warrant was ultimately dismissed. DaBaby is due back in court on Tuesday (Jan. 7) for the recent battery charge.

Although the Kirk rapper flossed a little initially, it was nothing but positive vibes with his follow up post as he shared a special moment that he had with Hip-Hop icon Diddy.

“Righteous Relationships only 💪🏾 @diddy #BlackExcellence 🖤,” DaBaby captioned the video that featured once again pouring love into the “Bop” rapper, while congratulating him on his accomplishments.

”I have to give a shout out to a young brother who’s always shouting me out on records and always shows love, “ Diddy said. “We done had lunch and brought the New Year in together; but check this out yo, tonight is your night. You’re the hottest n*gga in the game and we about to go in here and rip this sh*t down.”