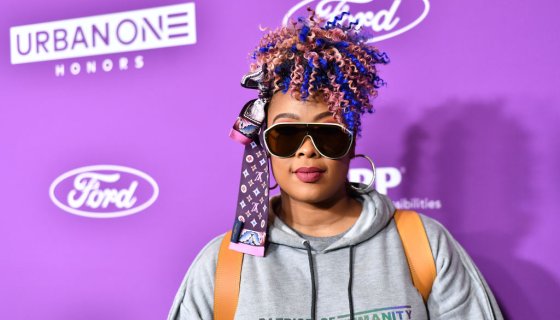 Da Brat is in a great space mentally right now, and it’s all because of .

Speaking with TMZ, the “Funkdafied” rapper revealed life has been good since she came out and disclosed to the world how in love she is with Dupart.

“I am elated to be made to feel so amazing. I am intrigued by her (Jesseca Dupart). I learn things from her when I’m wrong, she gets in my ass you know what I’m saying? And so it’s like, I’m very happy, and it just made me want to tell the world I’ve never felt like this, and I’m blessed.”

Da Brat went on to compare keeping her uality a secret from the world to like being “imprisoned” and that she no longer cares what people have to say.

When the Chicago native first opened up about her and Dupart’s relationship, many weren’t shocked, but there were quite a few people on social media . The couple put their love on display on the gram Back in March when Da Brat shared a touching post thanking the CEO of Kaleidoscope Hair Products for buying her a white Bentley truck as an early birthday present.

Never have I EVER. Needless to say… I’ve always been a kind of private person until I met my heart’s match who handles some things differently than I do. Thank you baby @darealbbjudy for far more than this incredible birthday gift. I have never experienced this feeling. It’s so overwhelming that often I find myself in a daze hoping to never get pinched to see if it’s real so I can live in this dream forever. SEE @darealbbjudy page for the BEST SURPRISE EVER‼️ #sosoblessed #twinflame #isthismylife #dontwakemeup #nothinghappensbyaccident

We’re here for love and happiness during these crazy times.