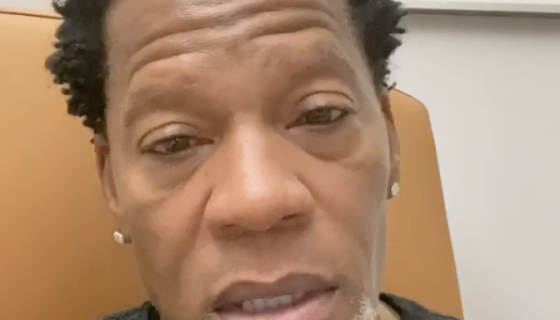 Black Twitter called it. After a scary moment that saw him , comedian D.L. Hughley revealed that he has tested positive for COVID-19.

DL Hughley passed out during his stand-up show at Zanies Nashville tonight. Prayers up for him! pic.twitter.com/qoE1CzbqHf

On Friday night (June 19), Hughley was performing in Nashville. However, during his set at Zanies Comedy Night Club while telling a joke he seemingly passed out. Someone offstage was able to catch him before he totally fell out and he was taken off stage.

Fortunately, he responded to treatment and while in the hospital he was diagnosed with exhaustion and dehydration. According to Hughley, he was administered a number of tests, and surprisingly (but not so surprisingly to some Twitter conspiracy theorists) he tested positive for the coronavirus.

Hughley said he was heading back to his hotel and will be quarantining for two weeks.

He added, “Hopefully I won’t develop symptoms. Maybe this is as bad as it gets and I’ll just pass out over and over again. But thank you. I appreciate your thoughts and your prayers. They did not go unnoticed or unfelt.”

Considering we didn’t see any masks in the clip where Hughley is seen passing out, we suggest everyone in the club and who came in contact with him do so, too.