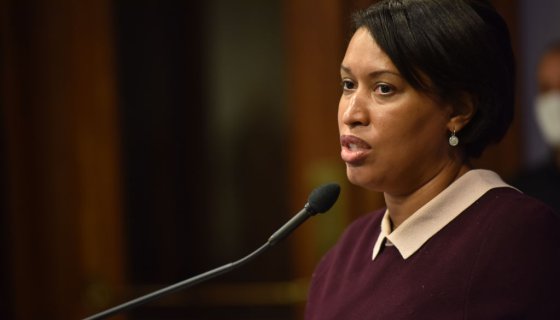 D.C. Mayor Muriel Bowser has been one of the many women who have been stepping up in the light of the civil unrest sweeping the nation.

Bowser has been successfully trolling the occupant in the White House, with powerful messages like a gigantic and renaming a street to Black Lives Matter Plaza has her eyes set on another mission. The D.C. Mayor is joining congresswoman Alexandria Ocasio-Cortez in demanding the change its name.

Speaking with The Team 980 & 95.9 FM, Bowser stated, “it’s past time” the team made a move to rebrand. She also said she believes the team’s name is also an “obstacle” in getting a new stadium.

“I think it’s past time for the team to deal with what offends so many people, and this is a great franchise with a great history that’s beloved in Washington. And it deserves a name that reflects the affection that we’ve built for the team.”

Bowser was also asked if the team’s name is hurting its chances of getting a new stadium in D.C. … and she believes it’s an “obstacle.”
“It’s an obstacle for us locally but is also an obstacle for the federal government who leases the land to us.”Despite calls from government officials and a recent poll conducted by UC Berkeley stating more than half of 1,000 Native Americans found the name offensive, the team still believes the name is not offensive.—