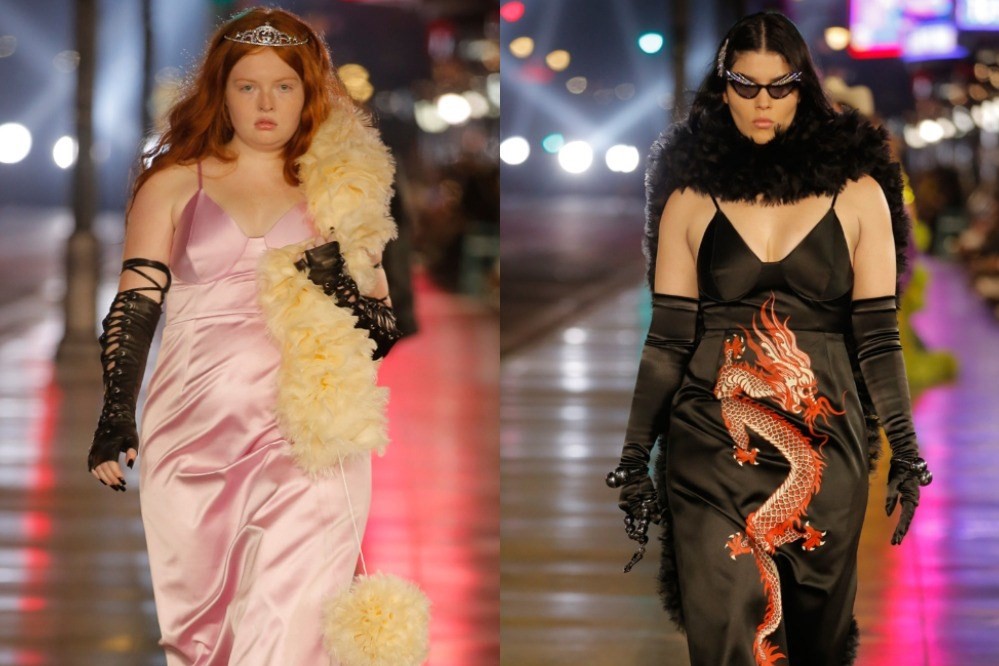 Last night Gucci took over the star-stamped Hollywood Boulevard for its centenary show, Love Parade. It was a schmaltzy retrospective of cinematic style, where everything came marabou-trimmed, sequined, and adorned with 10-gallon Spaghetti Western hats. A 115-strong phalanx of models, including Phoebe Bridgers, Macaulay Culkin, Jared Leto, and Steve Lacy stormed the sidewalk, as Alessandro Michele pledged his allegiance to the “indefeasible gift and mythopoetic aura” of the silver screen.

Among the crush of celebrity cameos, however, were models, including Dazed 100er Tess McMillan, who made history as the first curve models to have ever walked a Gucci runway. While labels like Versace, Jacquemus, and Fendi have broadened their casting call, recruiting the likes of Precious Lee, Jill Kortleve, Paloma Elsesser, and Alva Claire to its catwalks, many of the blockbuster fashion houses are still reticent to showcase anyone above a sample size. That being said, it’s not the first time that Gucci has cast a curve model. Clara Louise, a London native, booked an advertising campaign alongside Harry Styles this time last year and prior to that, Ellie Goldstein was the first model with Down’s Syndrome to score a high fashion campaign, posing for Gucci’s makeup line.

The most recent SS22 season was the second highest on record for diversity, with curve models accounting for 1.81 per cent of all castings. Though that may not sound like a lot, it’s quadruple the number from AW21, which had only 19 curve models on its runways. As hoped, SS22 was also the most racially diverse season, with 48 per cent of appearances being by models of colour. We also saw a bump in age and gender diversity, too, with New York ranking highest for its number of transgender and non-binary castings.

Check out our lowdown on Gucci’s Love Parade show here and look back over the seven times curve models tore up the runway.