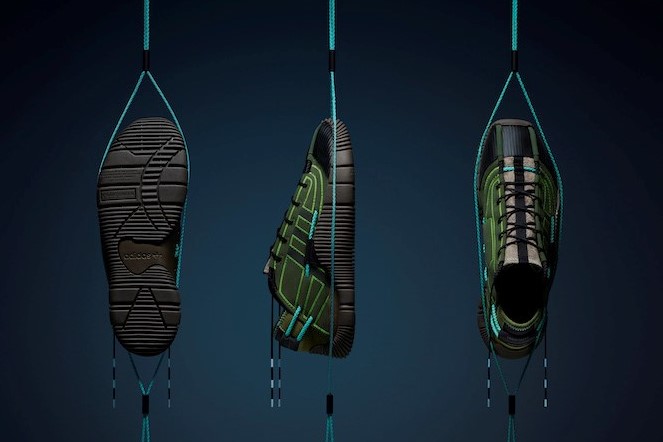 Craig Green’s collections may be the result of wild ideas formed in the dark recesses of his mile-a-minute mind, but no matter how esoteric the inspiration, the designs themselves are steadfast in their construction.

Whether he’s dissecting the fragile layers of masculinity or exploring the idea of heaven, the concept may feel intangible – at least before you begin to dig a little deeper – but the garments themselves are grounded in deep technical know-how.

It’s perhaps this unconstrained creativity and commitment to craft that made Green a likely candidate to join forces with adidas Originals. The designer and the sportswear behemoth first came together in 2019, at Green’s SS20 show, with fans getting their first glance at a collaborative sneaker partnership.

Drawing inspiration from classic adidas silhouettes the Kamada and the Ozweego, Green presented two entirely new styles: the CG KONTUUR I and the CG KONTUUR II. “There’s so much you can do with sneakers that you can’t do with clothing,” he explained at the time. “It’s exciting to think of all we can create in this collaborative project with adidas Originals.”

With the project continuing through 2020 and well into 2021, now, Green and adidas Originals debut their latest collaborative effort. The new CG SCUBA PHORMAR sees the designer get more stuck in than ever, after he turned his hand to creating a whole new sole. Referencing the piped structures that form a cornerstone of Green’s collections, the chunky, ridged unit moulds around the foot for optimum comfort and support.

Meanwhile, the sneaker’s distinctive upper incorporates a unique collapsible structure constructed using a series of cords and tunnels, all of which is finished with adidas Originals logo detailing, including the unmistakable Trefoil and 3-Stripe lace tips. The collection’s palette combines moody greys, brown, and black with bold flashes of ‘Solar’ green, ‘Blue Oxide’, and zingy orange.

“I’m always interested in the evolution of design ideas, creating an aesthetic that’s founded in form and function,” explains Green of the new line. “This season, we worked closely with adidas to create our first sole, reflecting both the quilting that is a signature of our brand, as well as the iconic adidas 3-Stripes. We then evolved the cording system introduced last season to create this brand-new style.”

Alongside the earlier KONTUUR I and II silhouettes, since linking up with adidas, Green has also reworked and reimagined icons including the adidas Superstar, as well as the innovative Mundial football boot, which became the third style in the collaborative KONTUUR series.

The ongoing collab has unsurprisingly scored itself a series of high-profile fans, with Timothée Chalamet slipping a pair of CG ZX 2K Phormar II on while out and about in New York, and Bella Hadid finishing off a 00s-inspired beach look with a black version of the same style.

Click through the gallery above, and head here to get your hands on a pair.