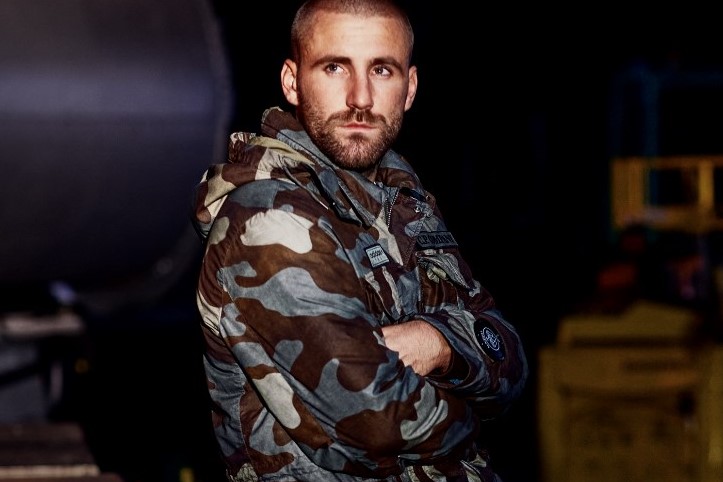 The Italian label is celebrating its 50th birthday with an anniversary exhibition in Darwen, a mill town in the northwest of England

Last week, sleepy Lancashire market town Darwen awoke to a 40-foot version of Manchester United football player, Luke Shaw, wearing a gigantic pair of adidas Spezial sneakers. Emblazoned in behemoth size across the wall of an abandoned bank, the mural was the work of kamikaze artist Peter Barber, and marked the 50th birthday of CP Company, as well as its “Spezial” anniversary collection with adidas.

Founded by Stone Island’s Massimo Osti in 1971, the Italian label is celebrating its cinquantesimo with a one-off exhibition during the British Textile Biennale. Taking over the basement of a Darwen car park, five decades’ worth of the brand’s archival pieces and sportswear innovations are currently on show, with workshops and panel talks from president Lorenzo Osti and head designer Paul Harvey also on the line-up. Debuting on October 14 at CP Company stores, an accompanying celebratory capsule sees adidas’ Haslingden jacket reimagined in Italian camo and technical CP Company fabric, and includes a co-branded, verdant, three-striped sneaker.

Though Darwen may seem like an unusual haunt for a Bologna-born brand, the town is widely considered the birthplace of professional football and the northwest of England – particularly its football subculture – has always gravitated towards CP Company’s casual, utilitarian-inflected designs. Not to mention that it’s also the birthplace of adidas Spezial creator Gary Aspden.

“Holding a prestigious event like this in a post-industrial mill town like Darwen is an unexpected, bold, and unique statement for CP Company – going beyond the major cities to support an area of the UK that has loyally contributed to our legacy,” the brand said, celebrating the opening of the exhibition with local heroes Goldie, Dynamo, and Ryder, Bez, and Rowetta from the Happy Mondays. “CP Company has shown its integrity by bringing the exhibition directly to the people who gave them that integrity in the first place,” Dynamo added.

CINQUANTA:  A retrospective on 50 years of sportswear innovation by CP Company runs until the 10 October. Check out its website for more information.