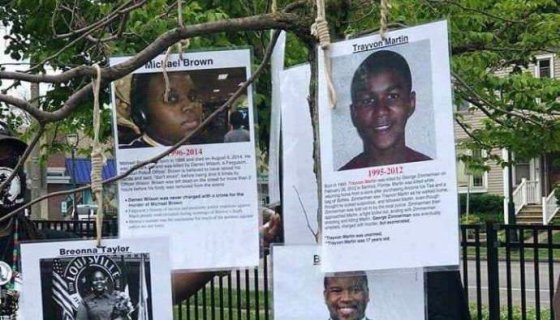 As protests in support of the movement continue to surge in many major cities across the nation, the reaction to the gatherings has become decidedly disturbing. In , images of Black men slain due to gun violence were seen hanging from a tree at a local city park.

According to several local outlets, including WKOW, FOX 6 NOW, and others, images of Trayvon Martin, Mike Brown, Botham Jean, Eric Garner, and others were found hanging from nooses in the city’s Riverside Park.

Speaking with another outlet WISN, members of the Original Black Panthers took down the image with King Rick speaking with the outlet at length about the act.

“Historically, African Americans have been hung and lynched,” activist King Rick told WISN. “I don’t care what anybody says, they can justify it all they want to. It was disrespectful not only to the memories of these individuals, our beloved individuals, but also to the African American community, so I’m not hearing it.”

The chilling images have added anxiety and speculation to a series of death by hanging reports across the nation which many are saying were not self-inflicted.

The Milwaukee County Sheriff’s Office launched an investigation on Monday (June 22) into the matter, describing in a press release that each of the victims shown in the images died after encountering law enforcement and a description of how they died was also shared at the bottom of the photos.

Via Facebook, King Rick shared of a post of him and the Original Black Panthers taking down the images and left a fiery message for those who performed the act. The post can be viewed below.