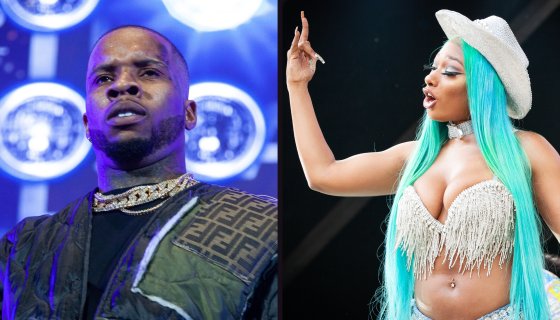 has all the explaining to do. In a story that gets stranger with every new piece of information, the police now believe Megan Thee Stallion was attacked, and they have their eyes on Tory Lanez as the perpetrator.

It started when while riding dirty, and Megan Thee Stallion was in the whip. She was injured, with initial reports saying she cut her foot on glass in the vehicle.

But then the “Savage” rapper clarified the narrative, , and even required surgery to removed bullets from her leg. Instantly, Tory Lanez was  as being a hothead who had the audacity to shoot at the leader of the Hotties.

However, the authorities claimed Megan’s story didn’t match up with what she told them. But now the police are getting more intel and they now believe she was indeed attacked, and they have questions for Tory Lanez.

According to TMZ, the cops have now initiated an assault with a deadly weapon investigation to find out exactly what happened that early Sunday morning in the Hollywood Hills.

The rumor mill is swirling with sources saying that Tory Lanez let off shots as Megan Thee Stallion tried to leave the SUV after a dispute, but so far this is all unconfirmed. If so, the shots were fired before cops arrived on the scene. Now more sources are saying that the R&B crooner is going to say it was an accidental shooting.

Word is detectives are having trouble finding witnesses willing to cooperate. Expect them to be tracking down leads on social media.

The truth always comes to light, and right now Tory Lanez is looking extra funny in the spotlight.