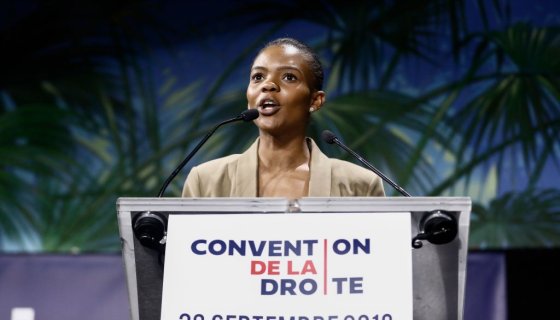 and her tap-dancing routines for her conservatives masters have often been aimed at Black Americans and their outcry over racial injustice. With the death of sparking protests and hopeful change, Owens used her vast platform to talk down the incident and to say with her chest that the Black Americans have a tendency to make martyrs out of criminals.

“I do not support George Floyd and a media depiction of him as a martyr for black America,” Owens says in one portion of her rambling 17-minute video in where she promotes conservative ethos and praises white Americans for uplifting the so-called best of their society while saying Black Americans fail in that regard.

To hammer her point, she once again stated that Black America is misinformed and elevating Floyd while ignoring his criminal record, saying that other communities would never do the same.

“You would be hard-pressed to find a Jewish person that’s been five stints in prison that commits a crime and dies while committing a crime and the Jewish people champion and demand justice for,” Owens added.

We won’t dignify Owens any further by sharing other quotes but we do invite you to watch her video for the sake of being informed on her terrible position as it related to the tragic murder of George Floyd.

It goes without saying that at the moment of Floyd’s death in South Minneapolis, the police who cornered him were not in danger nor was Floyd given a chance to defend whatever crime he was accused of committing. The response to Floyd was rooted in a devaluing of Black lives and seeing anyone who is big and Black as a threat that must be snuffed out, even though Floyd never once tried to resist.

Owens is probably pretty proud of herself for her latest rant that misses the point again. And she’ll get patted on the head by her conservative buddies for putting us darkies in our place.

Salute to @SupergirlAlicia for using the current trending topic on Owens to instead bring attention to another Black woman, Army veteran LaVena Johnson.

OK, instead of using #candaceowens TT to give her attention. I’m going to use it to raise awareness for a young lady that deserves justice: LaVena Johnson #LaVenaJohnson❤️ I will create a thread discussing her story and proving links with further information: pic.twitter.com/5TlJlWDGwZ

We should probably follow Aly’s lead and ignore Candace Owens but it’s part of our duty to inform the public on who the Ops are out there. It won’t be long before Owens uses her platform again to slam her own people and we’ll likely report on it, but the best way to kill a troll is to ignore it.

If you must, we’ve posted Owens’ video below.

Confession: #GeorgeFloyd is neither a martyr or a hero. But I hope his family gets justice. https://t.co/Lnxz0usrp5

Troll #CandaceOwens will find herself alone & w/o income when we vote the evil out of office. She will have to beg forgiveness for her whole hateful life. She will be ousted from society for the disgusting, anti-American, misguided, flame-stoking trash she is.

I just told y’all only a couple of days ago about ignoring #CandaceOwens …stop sending me her tweets!

This person with zero cognitive capacity or cultural compass is blocked and out of my life https://t.co/22MDQal8tR

Candace Owens is a Black, white Supremacist who profits off of being the black face of white racism.

Black people can always make a quick buck being willing to say all the racist stuff white racists want to but can’t. #CandaceOwens

Although, she did sue, and was payed by her former school for the trauma she suffered due to racism while attending.

She is a joke.

#CandaceOwens claims that racism doesn't exist, because she is free. Then went on to suing a school for being racist. pic.twitter.com/6NWMyXgyT9

Why is anyone listening to #CandaceOwens? She said HPV wasn’t contagious and that’s the least batshit crazy thing she has ever said in her entire life. She’s a pathetic grifter.

I see #CandaceOwens is out here being an attention whore, as always.

Clearly her parents f'ed up.

Let’s make one thing clear..#CandaceOwens ..we are not making George Floyd out to be some kind of hero..his addiction and his background has nothing to do with what we are fighting for…

Folks can't take a broad like #CandaceOwens seriously who is so stupid with her "Is We Hurt Boss?" self-hating racism barbs to the public & "conservative" bullsh*t that Turning Point USA let go of her goofy, dry ass edges* ass.