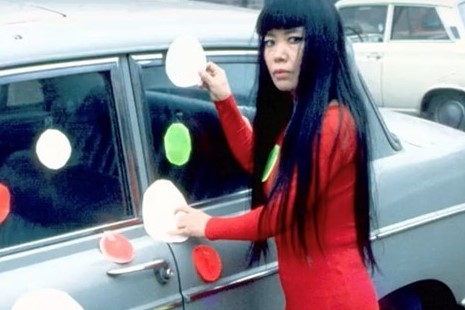 Yayoi Kusama is 92 years old and wants to self-obliterate. Be it through endless spirals of her trademark polka dots, the kaleidoscopic expanses of her infinity rooms, or the globular sculptures created to swallow entire spaces, it has been Kusama’s lifelong goal to negate herself into the environment and in doing so, reach total and utter oblivion.

For over 50 years, the dotted tentacles of Kusama’s work have punched holes in culture, imbuing the Japanese artist with a transcending celebrity which, in recent times, has translated to serious social cachet. In 2017, a gallery in LA had to impose a 30 second selfie rule to allow for the steady flow of guests who had queued (for hours) to see Yayoi Kusama: Infinity Mirrors. And in a Washington gallery earlier that same year, a visitor tripped, fell into, and smashed a Kusama pumpkin while attempting a poorly-staged photo in the artist’s resplendent roomscape.

Yet throughout all of her forays into counter-culture, fashion has been a rarely-acknowledged red thread. Until Kusama returned to Japan in 1973, her clothing enterprise, Kusama Fashions Ltd, produced garments unrestrained by traditional approaches to design. Her shows frequently descended into sex-fests and, despite leitmotifs of protest and nudity, her collections were stocked in hundreds of commercial boutiques across the US.

From Martin Margiela to Rei Kawakubo, Kusama’s outré pieces predate some of the fashion industry’s best-known innovators, “my costumes invariably suggest the path of the new generation” she once told The Guardian and this goes way beyond the humble polka dot. Below, we hone in on Yayoi Kusama’s relationship with clothing and the rarely explored legacy she has left on the runways of today.