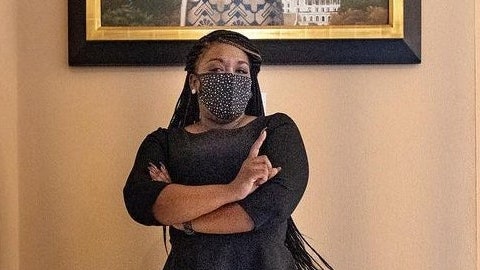 Like anyone starting a new job, an incoming congresswoman has plenty to figure out. Where’s her office? Who should she hire? Who are her colleagues? How does being in Congress actually work? The list goes on—and as Cori Bush recently pointed out on Twitter, it may include the not-incidental challenge of assembling a suitable wardrobe on a slender budget. “The reality of being a regular person going to Congress is that it’s really expensive to get the business clothes I need for the Hill,” wrote the Congresswoman-elect on November 10th. “So I’m going thrift shopping tomorrow.”

Elected to represent Missouri’s St. Louis-area First District, Bush is a single mother, pastor, and former nurse. She’s best known for her tireless activism in her hometown of Ferguson, where the police killing of Michael Brown in 2014 sparked a major wave of Black Lives Matter protests and, for Bush, a call to political action. “We kept waiting for justice, and justice never arrived,” she explains matter-of-factly of her decision to run for her House seat in 2018. She lost that race, but ran again this year and won, part of an exciting progressive wave of newly-elected Democratic reps this cycle that includes Bush, and Jamaal Bowman, Mondaire Jones and Ritchie Torres, all from New York.

When she tweeted her wardrobe woes, legions of supporters replied to Bush with offers of free clothes, which she didn’t accept, and free advice, which she did. “We’ve gotten about a thousand messages,” she reports. “Stores, designers, people just wanting to help.” Alexandria Ocasio-Cortez counseled, “patience as you get your closet together, sis,” and suggested that Bush turn to fellow Squad member Ayanna Pressley for tips on accessorizing. Here, Cori Bush talks to Vogue about how the first Black woman to represent Missouri in Congress plans to nail her political look.

VOGUE: When I saw your tweet, it took me by surprise—perhaps because I assumed that anyone who runs for Congress must have spent enough time in the corridors of power to have a “business attire” wardrobe in place. And then it occurred to me that if you want to elect people with outsider points-of-view, well, of course they don’t necessarily own those clothes…

Cori Bush: Listen, I’ve been around politics all my life. My dad’s a Councilman, he’s a former mayor. And it’s because of all the greed and corruption I saw around him, that I swore I’d never get involved with politics. Ever. I decided to serve in other ways—I went into the ministry, I became a registered nurse. I did things like working with the un-housed population in the community. And all along I had nice clothes—I mean, when I preach, I’m dressed up, you know? Where the wardrobe changed for me was in the time after Michael Brown was murdered. Because at that point, being on the streets—and I’ve never stopped being on the streets—my life became this revolutionary T-shirt, jeans and boots, always-be-ready-for-protest-thing. And unfortunately, I can’t wear my old nice clothes now, because I’ve gained weight.

VOGUE: God, why is it so refreshing to hear a woman in politics speak matter-of-factly about weight gain?

CB: It is what it is! Doing activism, I gained weight. Running for office, I gained weight. Like, I just had other stuff on my mind. And then, during the pandemic, I had double-pneumonia. My doctor thinks I had COVID-19, probably, and anyway they gave me these steroids and they made me bigger, too. So my old clothes, it’s like—well, too bad. Guess I need a whole new wardrobe. But like I tweeted, damn that’s expensive.

VOGUE: What kinds of things are you shopping for?

CB: Everything. Blazers, suits, skirts, blouses, sweaters, scarves, shoes, purses, jewelry. All of it. And I can’t just put on a black blazer and black slacks. It can’t just be basics. What I’ve found for myself is that, when I’m going into places where I always have to fight, where I have to bring it, I need something to make me feel good.

VOGUE: How would you describe your sense of style?

CB: Oh, pretty classic, for the most part—but with flair. I like to push it. I’ll put on a plain-looking, dark suit, but my shoes will be…what?! I love pink. But not that Pepto pink—deep pink. And sparkles, I love sparkles. Clothes with rhinestones and sequins, I’m so into that. Even if I need to bring it down a notch, I’ve always—always—got sparkles on my nails. I do them every two weeks, and they are never, ever just a plain color. I’ve got to have that sparkle. So when I’m feeling down I can look at my nails and it snaps me out of it.

VOGUE: Which female politicians do you look to for inspo? I noticed that AOC was giving you advice.

CB: Yeah, I got tips from Alex, from Rashida [Tlaib], from Ayanna, from Ilhan [Omar], and from Grace Meng. She told me about this great consignment store here in D.C. that I went to today. I do like a lot of the stuff Ayanna wears, and she was also telling me how to do the makeup on a budget, the lashes on a budget… But I can’t say there’s any one woman in politics I look at and think, I want that. I guess the closest would be Michelle Obama. She always looked good.

VOGUE: So what’s this consignment store Representative Meng told you about?

CB: It’s called “Clothes Encounters.” It had a lot of business attire—some very nice designer stuff. You could tell a lot of stuff was left there by women who’d worked on the Hill, or who were involved with politics here, in general. Lots of suits, blazers, fancy laptop bags. That kind of thing. But I’ve been going everywhere. I picked up eight-to-ten blazers from a Goodwill in my district.

VOGUE: Is most of the shopping you’re doing secondhand?

VOGUE: Any designer labels you’re keeping an eye out for?

CB: Can I be honest? I’ve never really stepped into wearing designer clothes. That is not my world. I wouldn’t even know what to look for. My life, it’s been about places like Express and H&M, you know what I mean? The top level would be, I don’t know, White House/Black Market. If I had to name my favorite designer, it’d probably be Gabrielle Union. Some of her stuff is just beautiful. To me, anyway.

CB: I’ve been having a hard time finding dresses. With my body shape, it’s tough to find dresses that fit. That’s true off-the-rack at a regular store or whether I’m looking at Goodwill. I’ll tell you what I found that I’m most excited about—I’ve got some peplum blazers, I love that style. I can’t wait to wear them. But I have to wait, because I can’t wear them until I’ve got the right shoes.