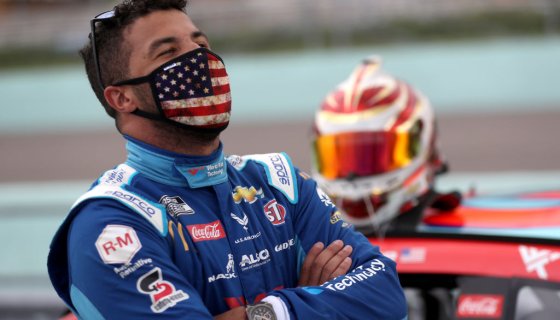 A disgusting act took place this weekend at the Talladega Superspeedway after NASCAR driver and his team discovered a noose in their garage. With the racing league embracing changes such as doing away with the confederate flag and allowing racers to express their political aims, this attack could be a result of that.

Several outlets have covered the incident, which took place on Sunday (June 21). Local outlet The Anniston Star reports that NASCAR officials are launching an investigation into the matter and issued a statement regarding the act.

“Late this afternoon, NASCAR was made aware that a noose was found in the garage stall of the 43 team,” NASCAR’s statement said. “We are angry and outraged, and cannot state strongly enough how seriously we take this heinous act.”

The statement continued with, “We have launched an immediate investigation, and will do everything we can to identify the person(s) responsible and eliminate them from the sport. As we have stated unequivocally, there is no place for racism in NASCAR, and this act only strengthens our resolve to make the sport open and welcoming to all.”

Wallace, the lone Black driver in the Cup Series grouping of drivers, and his recent activism has been praised by many within and outside the sport. Along with his activism, Wallace has been vocal about having the confederate flag, long considered a symbol of racism and division, removed from being displayed at tracks.

The noose was found just ahead of the GEICO 500 race, which was postponed until this coming afternoon due to weather. Wallace has since issued a statement regarding the act Twitter, vowing to continue his fight against racism.

“Today’s despicable act of racism and hatred leaves me incredibly saddened and serves as a painful reminder of how much further we have to go as a society and how persistent we must be in the fight against racism,” read the start of Wallace’s statement.

He added, “Over the last several weeks, I have been overwhelmed by the support from people across the NASCAR industry including other drivers and team members in the garage. Together, our sport has made a commitment to driving real change and championing a community that is accepting and welcoming of everyone. Nothing is more important and we will not be deterred by the reprehensible actions of those who seek to spread hate.”

Stars from other sports, such as LeBron James, have voiced their support of Wallace along with fan reaction on social media rallying behind him. We’ve got those responses listed down below.

Sickening! @BubbaWallace my brother! Know you don’t stand alone! I’m right here with you as well as every other athlete. I just want to continue to say how proud I am of you for continuing to take a stand for change here in America and sports! @NASCAR I salute you as well! 🙏🏾✊🏾👑 https://t.co/1TwkjVHai5

I can’t begin to fathom the pain this action has caused. I stand with you @BubbaWallace. https://t.co/lV8v46ktWN

I stand with you champ https://t.co/GGRXWwy2FM

.@BubbaWallace this is so powerful what you are doing with @NASCAR https://t.co/3wAXBeUt4T

I’ve been working in my race shop all night.. Around 11:30 at night i washed my hands and got on twitter to see what’s up.. UGH😔.. I am So Sorry my brother @BubbaWallace has to go through this HORRIBLE situation.. I love you, Bubba. #IStandWithBubba

God created us equal. I will never understand how some people don’t believe that. The stupid hatefulness that happened yesterday is disgusting. I know @NASCAR will oust this idiot. Go win today @BubbaWallace I’ll be cheering you on. 🏁 #IStandWithBubba

Woke up to some bad news that’s not worth repeating. Not because it’s not serious, but because That’s exactly what the culprits want, attention and the fear that comes from it.

I trust Nascar to handle it appropriately and fully support them in getting this right.

Noose found in garage stall of Bubba Wallace at Talladega Superspeedway. @BubbaWallace the ENTIRE sportsworld stands with you today. Thank you for your courage. This shall not stand! God Bless!

Waking up to this news today just breaks my heart for @BubbaWallace and @NASCAR I hope they find the pathtic people who did this and never let them near the sport again. pic.twitter.com/4Vo2vKzEMa

“If racism was still something that kind of existed in the abstract and you hadn’t yet fully digested it…let this crystallize the damn thing.”

–@mikegolicjr in response to a noose being found in Bubba Wallace’s garage at Talladega. pic.twitter.com/u3sbj4WyMp

also, bubba wallace has clearly spent years trying to get people to think less about his blackness, not more. you gotta have your head way far up your keister if your default assumption is that he made this up.

that gets on an idea i've hammered lately: the benefit of the doubt.

We’re with you Bubba. The journey to racial justice has taken far too long. Keep your eyes on @bubbawallace at Talladega, keep that racist’s noose in your thoughts and ask: when will this end? Maybe Bubba can get us to that checkered flag 🏁 a bit sooner. It’s time America. https://t.co/dK51FgnjoR

Several NASCAR drivers are planning to make a pre-race show of support on pit road for @BubbaWallace today at Talladega, per sources.

➖ The plan is still developing and it's not yet clear exactly what they will do. pic.twitter.com/oTTDePCmIL

I’m competing against @BubbaWallace on the racetrack today, but #IStandWithBubba every day. You come at him with ugliness, you’re coming at all of us.

I am shocked and appalled to hear of yesterday’s vile act against @BubbaWallace in Talladega – there is no place for this disgusting display of hatred in our state. Full statement: https://t.co/wmwVCOFd4B pic.twitter.com/mcFXKUynRs