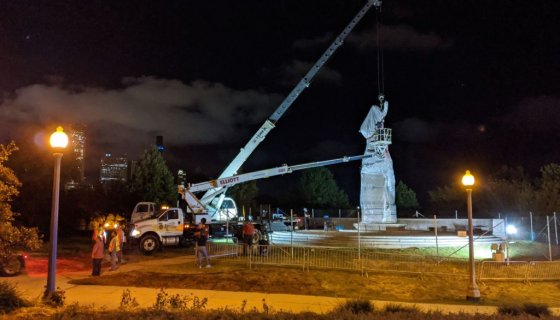 Since July 18, protesters tried to forcefully remove a tarp-covered statue in Grant Park, sparking a violent clash with Chicago police. The demonstration initially started at Buckingham Fountain to protest defunding the police, but quickly turned hostile as the crowd grew.

Activists staged a protest in front of Lightfoot’s home overnight. As a result, the shook Mayor buckled to pressure and immediately ordered the removal of the controversial statue in Little Italy hours later.

You can hear cheers in the background as the statue is lifted @cbschicago pic.twitter.com/uWGEris9ya

A crowd in front of Grant Park cheered when a crane made half of the statue airborne during its removal.

In a statement issued by the Mayor’s office, the city will evaluate the remaining standing statues and monuments and will “develop a framework for creating a public dialogue to determine how we elevate our city’s history and diversity.”

The City of Chicago—at Mayor Lightfoot’s direction—has temporarily removed the Christopher Columbus statues in Grant Park and Arrigo Park until further notice. This action was taken after consultation with various stakeholders. It comes in response to demonstrations that became unsafe for both protesters and police, as well as efforts by individuals to independently pull the Grant Park statue down in an extremely dangerous manner. This step is about an effort to protect public safety and to preserve a safe space for an inclusive and democratic public dialogue about our city’s symbols. In addition, our public safety resources must be concentrated where they are most needed throughout the city, and particularly in our South and West Side communities.

Over the coming days, Mayor Lightfoot and the City will be announcing a formal process to assess each of the monuments, memorials, and murals across Chicago’s communities, and develop a framework for creating a public dialogue to determine how we elevate our city’s history and diversity.

Racists hate to see it.