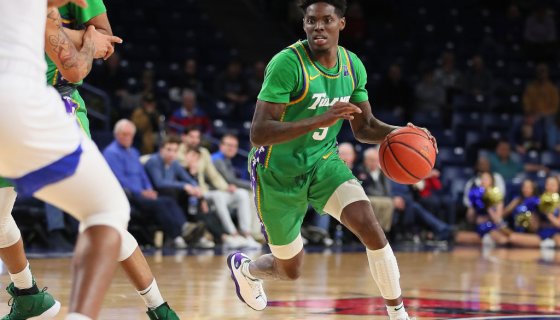 Just a week after declaring for the NBA Draft, Tulane University basketball stat Teshaun Hightower has been arrested for the murder of a man in Stockbridge, GA.

TMZ is reporting that the 6’5″ NBA prospect was pinched over the weekend by authorities who are claiming he and five other men were involved in the murder of 24-year-old Devante Long. According to the report on April 8 Hightower and five men showed up on the doorsteps of Long’s home at 10:49am before a dispute ensued and shots were fired. Long was rushed to the hospital where he later died. Hightower was arrested at 9:50pm this past Saturday night and booked on 8 charges including felony murder and felony assault.

Police have since bagged four of the five other men suspected of being there.

Hightower’s attorney, Averick Walker, is vehemently claiming the college basketball star is innocent and pointing the finger at his brother, Jeffery who he says shot Devante Long in self-defense.

“(Teshaun is) innocent,” attorney Averick Walker tells ESPN. “He didn’t shoot anybody.”
“It’s sad that this detective sought to make him out to be a monster and he’s not. When it’s all said and done, it will come out in the wash that the person who did fire the gun shot the gun to protect Teshaun.”
The attorney claims the victim came out of the house with a gun pointed at Teshaun … and Jeffery took action.
“That’s why the victim was shot himself.”Regardless of how things actually played out, Teshaun’s university released a statement informing everyone that Hightower had been “immediately dismissed” from the school’s basketball program following his arrest.

Whether or not this is enough to scare NBA teams from drafting Hightower even if he’s proven innocent remains to be seen, but with rumors swirling that the draft might be canceled altogether because of the Coronavirus pandemic, Hightower might have to wait another year to see if his future lies in the NBA or somewhere else.