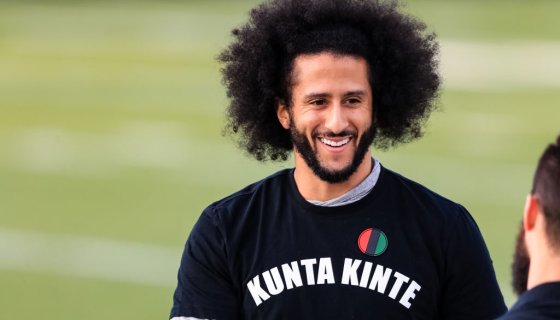 Colin Kaepernick is going to need a serious bag to step on a professional football playing field, even if it’s not the NFL. Reportedly, Kaps salary requirements for his services were considered too “exorbitant” for .

In an interview with NPR, XFL commissioner Oliver Luck spoke about the league’s resurgence with its first week of play starting this past weekend.

Many were hoping Kaepernick would suit up for a team, and bring a high profile named to the XFL as he showed off his NFL-worthy talents. However, Kap wasn’t on a roster, but not because the XFL didn’t try, or at least inquire.

MARTIN: Any thoughts about Colin Kaepernick?

LUCK: Great football player. I – you know, I’m not going to talk about any particular player outside of the group of guys that we have because we think – again, we’ve got the best 500 or so players under contract who aren’t in the National Football League or in other professional leagues.

MARTIN: But he’s not either. So I think the question becomes, why not distinguish yourself from the NFL by offering an opportunity to somebody who has a track record as a great player, who has a lot of following? Was that ever part of your consideration?

LUCK: We gave it some thought. We have some pretty significant salary restrictions, you know. We’re a start-up league, so we want to make sure that we can be fiscally responsible and fiscally prudent. And the, you know, salary requirements that some folks, you know, shared with us were in our case exorbitant, so we, you know, couldn’t go down that path.

And that was that on that.

MARTIN: Are you saying that you approached him or his representatives, and he wasn’t willing to talk to you because of salary requirements? Is that what you’re saying?

LUCK: I’m saying that we spoke with his representative, and the salary requirements that were broached in that conversation were exorbitant and certainly out of our range.

Now keep in mind that Colin Kaepernick made a reported $60M while he was in the NFL, and that’s not including his endorsement deals.

Considering how much Kaep has on the line if God forbid he got hurt…that wouldn’t even cover his rehab, if we’re going to keep it a buck. It’s .

Kaep did put on a workout for NFL teams this past November, and . No  NFL teams were willing to bite, with on his playing, for now.