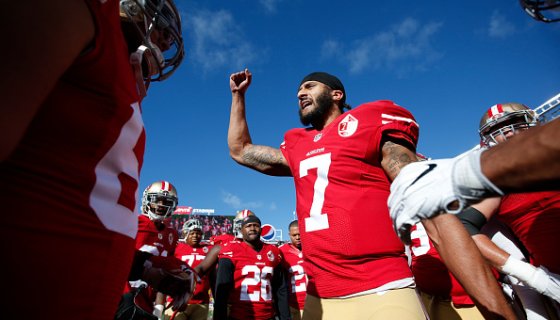 will continue to be a voice for the voiceless but now on a bigger platform. The activist is now partnering with one of the prominent media brands in the world to do so.

As spotted on ESPN the former quarterback will be telling a much needed story regarding racial inequality in the United States a new deal with The Disney Channel. According to the report the conglomerate will also deliver a documentary series on Kaep’s life including his career as a NFL star quarterback who seemingly risked it all to boycott police brutality. Additionally the new signing will help people of color land creative positions within the network.

Colin detailed his enthusiasm in a formal statement. “I am excited to announce this historic partnership with Disney across all of its platforms to elevate Black and Brown directors, creators, storytellers, and producers, and to inspire the youth with compelling and authentic perspectives,” he said. “I look forward to sharing the docuseries on my life story, in addition to many other culturally impactful projects we are developing.”

Disney also voiced their eagerness to work with the Milwaukee, Wisconsin native. “During this unprecedented time, The Walt Disney Company remains committed to creating diverse and inclusive content that resonates and matters,” said Bob Iger, Executive Chairman. “Colin’s experience gives him a unique perspective on the intersection of sports, culture and race, which will undoubtedly create compelling stories that will educate, enlighten and entertain, and we look forward to working with him on this important collaboration.”

The documentary series on life is said to already be in development.