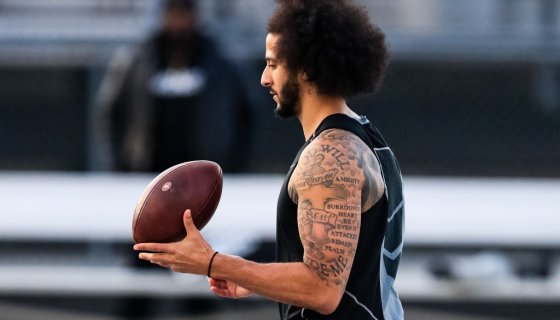 is still throwing deep bombs but unfortunately, they’re not coming from inside the pocket anymore. The free-agent quarterback and activist seemingly took a swipe at for sitting during the singing of the National Anthem during Super Bowl LIV.

Showbiz Cheat Sheet highlighted that Kaepernick, 32, took to his Instagram page and shared Miko Grimes’ Instagram Story post which featured the cover image for a TMZ report which highlighted that Mr. and Mrs. Carter remained seated during Demi Levato’s performance ahead of the big game in Miami.

It started with Miko Grimes, the wife of NFL star Brent Grimes. On Feb. 2, she took to her Instagram Story and posted a screenshot of TMZ’s coverage of the couple’s decision to sit for “The Star-Spangled Banner.” Grimes captioned the image: “I thought we were ‘past kneeling’ [though]?” She ended her post with a thinking face emoji.

Kaepernick followed up by sharing Grimes’ post to his own Instagram Story. His girlfriend, Nessa Diab, also posted the image to her page.

Last year when Jay-Z’s Roc Nation announced its social justice initiative with the NFL, the move was met with heavy criticism which prompted the Brooklyn mogul to respond to the chatter.

During an August 2019 press conference next to NFL Commissioner Roger Goodell, Jay-Z made the quip, “I think we’ve moved past kneeling and I think it’s time to go into actionable items.”

In Jay-Z’s defense, he did say he’s supportive of Kaepernick’s fight and doesn’t want an end to silent protests.