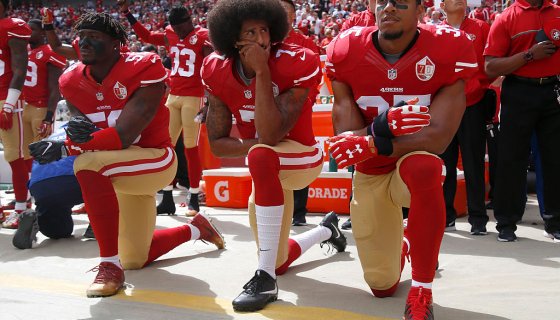 The NFL has some nerve. The same league that because he kneeled to protest police brutality sent out a statement about George Floyd’s death and the subsequent protests across the nation—and the irony was not lost on many who promptly called out the blatant hypocrisy.

With brands and corporations expressing their support of protests against police brutality and the murder of George Floyd, the NFL thought it would get in on the trend. Around 6pm on Saturday, May 30, the NFL shared a well-crafted message that may have had you fooled if you’re dense and haven’t been paying much attention.

“The NFL family is greatly saddened by the tragic events across our country,” reads part of the statement. “The protesters’ reactions to these incidents reflect the pain, anger and frustration that so many of us feel.”

It continues, “Our deepest condolences go out to the family of Mr. George Floyd and to those who have lost loved ones, including the families of Ms. Breonna Taylor in Louisville, and Mr. Ahmaud Arbery, the cousin of Tracy Walker of the Detroit Lions. As current events dramatically underscore, there remains much more to do as a country and as a league. These tragedies inform the NFL’s commitment and our ongoing efforts. There remains an urgent need for action. We recognize the power of our platform in communities and as part of the fabric of American society. We embrace that responsibility and are committed to continuing the important work to address these systemic issues together with our players, clubs and partners.”

Wait, now there is an “urgent need for action.”?

And what exactly did the league do? As you may recall, when Colin Kaepernick specifically protested police brutality by taking a knee during the National Anthem way back in 2016, the NFL and its mostly good ol’ white guy network of owners did their best to make sure his career was over. Even the Cheeto-In-Chief call him out of his name using the baseless spin that he was somehow disrespecting the flag.

This missive from the NFL’s owners and its Commissioner Roger Goodell is lip service in gaslighting form.

While the NFL must have forgotten, the immediate backlash to its headass statement (they don’t even mention police) in light of their own reaction to a peaceful protest four years ago, was swift. Peep some of the best take downs below.

Your league rejected peaceful protest. Your league victimized a Black man that peacefully activated his guaranteed American rights. You’re a part of the problem, and have done nothing rectify this. Therefore, it is my Black ass that you are invited to kiss. https://t.co/JKRzWWJKHw

You gotta be fucking kidding me https://t.co/K8vST8IaCo

Shame on you. This is beyond hollow + disingenuous. This is a lie. Your actions show who you are. You’ve done nothing but the exact opposite of what you describe here. Keep Mr. Floyd’s name out of your mouth. Shame on you + the “consultants” of this travesty of an organization.

If you had done things differently, we might not be at this point. But here we are, and your organization must do better. You must. pic.twitter.com/c0YIijoiPx

NFL owners: "The ultimate peaceful protest, taking a respectful knee, is so awful we'll blacklist the guy who did it for years!"

Also NFL owners: "Why are they rioting? Why don't they just peacefully protest?"

You think we don't see which knee actually bothers you? pic.twitter.com/B2xiJW7ZdT

What all of this statement really says:

This from team owners is something else https://t.co/Tuv5gSrNEA

Roger Goodell implemented a rule that says players can’t peacefully protest during the anthem on the field because he was completely & utterly terrified of fox news & maga costing him a few dollars even though the NFL makes billions. I don’t think this is the fight for him. https://t.co/0HWnGMUEYs

By blacklisting @Kaepernick7 and stopping the protesting at #Nfl games, Roger Goodell helped worsen the problem – and for him to say there is an "Urgent Need for Action" now is a bit much