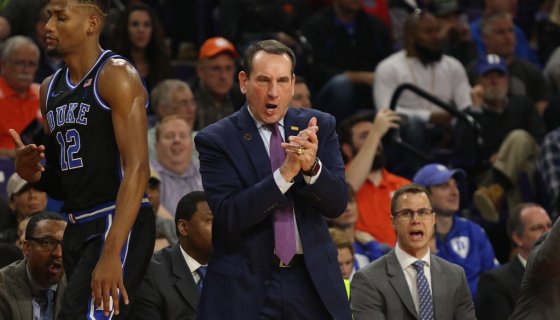 Even Duke’s had enough the Cameron Crazies. Coach K was spotted going on the student section at Cameron Indoor Stadium while his squad played the Pitt Panthers last night (Jan. 29).

The students were chanting for Pitt coach Jeff Capel to come sit with them. The problem was that Jeff Capel played his college ball and even coached at Duke, and Coach K was having none of it.

Coach K was seen on video basically blowing a gasket, and reportedly yelled “Shut up!” and “He’s one of us!” And by the dejected looks of some of those Cameron Crazies, they got the message.

After Cameron Crazies started yelling “Jeff Capel, sit with us,” Coach K could be seen yelling “Shut up” and “He’s one of us.”

Capel played at Duke and coached there for 7 seasons. pic.twitter.com/OdKeJ62MMv

The fact that the kids in the stand looked like stereotypically privileged college bros just itching to yell back “Do you know who my dad is?!” made for some peak Internet slander.

And we’re here for it.

Coach K eventually apologized for his outburst. But still wasn’t feeling the chants, and even offered alternatives.

Coach K says going off on the student section was a mistake on his part….then offers chant ideas 😂 pic.twitter.com/oUNKfhmzuN

But anyway, peep the Duke slander below.

The Cameron Crazies calling their dads after Coach K went in on them pic.twitter.com/xzGim1TZwz

When Coach K tells you that you aren’t getting any Vineyard Vines stuff for your birthday. pic.twitter.com/Dk6wIkK1UL

After 41 years, Coach K finally hates Duke fans as much as everyone else does. https://t.co/xmEo7zp0w6

Cameron Crazies when they see Coach K stomping and yelling directly towards them pic.twitter.com/CVAV3p8a5X

Coach K losing his shit on the Crazies is the funniest goddamn video. pic.twitter.com/nGpSpB7ri6

When Coach K yells “Shut up!” at the Crazies multiple times….

K always gets a pass….even when he loses it on his own fans for no good reasons https://t.co/Ya2cx2sTle

Imagine being a few beers deep in the student section, chanting some stupid shit, & then all of a sudden your'e getting lit up by Coach K 😂😂 https://t.co/Y1b3yh6a6f

I needed the joy today of watching Dukies getting reemed out by Coach K 😂😂 pic.twitter.com/9XLPLpgoBa

When dad won’t let you take out the Porsche this weekend. #duke #coachk pic.twitter.com/vktgKkzpub

A few of those kids shit themselves when Coach K came that way 😂.