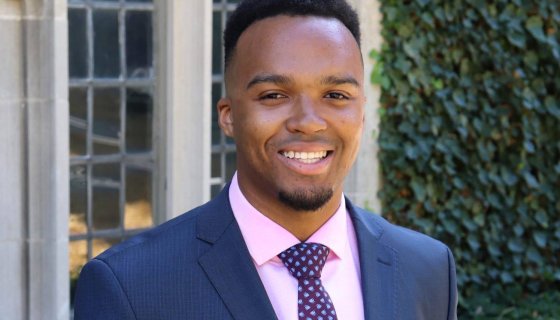 Some good news during these absolutely trying times, Princeton has announced that it will have its valedictorian in the school’s 274-year history.

The prestigious university made the announcement that Montreal native, Nicholas Johnson was named the valedictorian of the class of 2020. The decision marks the first time Princeton will have a Black person who will hold the highest academic achievement in the school, which has a checkered past when it comes to slavery.

Congratulations to Nicholas Johnson, named valedictorian and Grace Sommers, named Latin salutatorian for #Princeton20! 👏⁣ ⁣ Nicholas Johnson ’20⁣ Hometown: Montréal, Québec⁣ Major: Operations Research and Financial Engineering⁣ Certificates: Statistics and Machine Learning, Applied and Computational Mathematics, and Applications of Computing⁣ Residential College: @whitmanatprinceton⁣ Thesis: “Sequential Stochastic Network Structure Optimization with Applications to Addressing Canada’s Obesity Epidemic”⁣ Post-grad plans: Johnson begins Ph.D. studies in operations research at @MITpics.⁣ ⁣ “My favorite memories of my time at #PrincetonU are [those] spent with close friends and classmates engaging in stimulating discussions – often late at night – about our beliefs, the cultures and environments in which we were raised, the state of the world and how we plan on contributing positively to it in our own unique way."⁣ ⁣ Grace Sommers ’20⁣ Hometown: Bridgewater, NJ⁣ Major: Physics⁣ Certificates: Applications of Computing, Applied and Computational Mathematics, Ancient Roman Language and Culture⁣ Residential College: @butlercollegeprinceton⁣ Thesis: “Order and Disorder in a New Class of Spin Systems”⁣ Post-grad plans: Sommers begins Ph.D. studies in physics right here at #PrincetonU.⁣ ⁣ “In addition to the joy of learning the material … the approachability of my professors, both as advisers and as instructors, has been a highlight of my learning experience … I’ve enjoyed having thought-provoking conversations with my professors and classmates."⁣ ⁣ Johnson and Sommers will participate in the 2020 virtual commencement on May 31, 2020. Congrats to Nicholas and Grace!

Johnson is well aware of Princeton’s history and spoke becoming the predominately white university’s first Black valedictorian, a decision which stunned him when he first found out.

“Being Princeton’s first black valedictorian is very empowering, especially given its historical ties to the institution of slavery.”
Johnson also pointed out that Princeton is taking steps to “reconcile” its checkered past.
“They’ve taken very deliberate steps to reconcile things.”
The 22-year-old graduate majored in operations research and financial engineering, he wrote his thesis on developing algorithms to design a community-based preventive health intervention to decrease obesity in Canada. His study also included applications to help impose social distancing guidelines to help stop the spread of the coronavirus.
Sounds very worthy of being named valedictorian to us.
When asked what would be his fondest memories during his time at Princeton, Johnson reflected on spending time with his close friends.

“My favorite memories of my time at Princeton are memories of time spent with close friends and classmates engaging in stimulating discussions — often late at night — about our beliefs, the cultures and environments in which we were raised, the state of the world, and how we plan on contributing positively to it in our own unique way.”

Princeton’s commencement ceremony will be virtual due to and will be held on Sunday, May 31, 2020. Johnson will be in attendance.