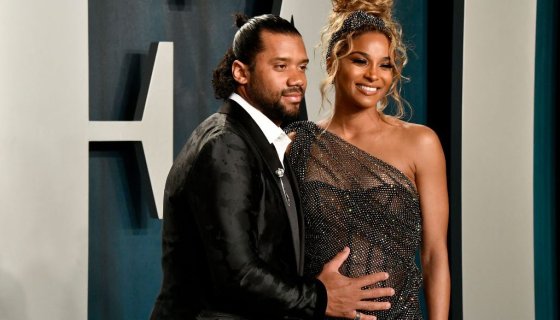 have become the epitome of #RelationshipGoals for many, and that trend will undoubtedly continue after their cute gender reveal video. With their children in tow, the family shared the big news social media and the reactions to the moment are coming in fast.

The video features Wilson, Ciara, little Future, and the couple’s youngest, Sienna. After Ciara asks what everyone was hoping for in the reveal, including Sienna openly stating she’d prefer a sister, Wilson said that his wife already knew his answer while little Future stood next to his stepfather.

With the reveal sharing the couple is expecting a baby boy, the family celebrated joyously as expected, and even Sienna got in on the action. The child will be Ciara’s third and Wilson’s second and the feel-good moment certainly warmed hearts in these tough times.

On social media, the jokes at big ‘s expense have been flying in of course, along with fans congratulating the happy couple. We’ve got those reactions listed below.

Lil future running around like he doesn’t have 15 brothers already…. 😂😂 pic.twitter.com/CpQGhrWclN

CONGRATULATIONS: Ciara and Russell Wilson revealed they are expecting their second son; the couple also have a daughter. We love to see this Black love. @ciara @DangeRussWilson pic.twitter.com/jpKkHIIvx2

I love the love Ciara and Russell show. It’s so pure and black as hell. I love it.

Ciara and Russell are thriving, trending on Twitter, having a baby. Y'all better check on y'all's toxic king Future pic.twitter.com/i1Wwlsy4zS

Ciara and Russell are the couple of the century. He took her from a toxic situation and made her a better woman . Now she’s a mother of 3 & he’s a father of 3 . Yes I said that correctly …. pic.twitter.com/Oqkpceu85c

I don’t like gender reveals but for whatever reason, I enjoyed Ciara and Russell’s reveal and I’m so happy for them. I love their family. 🥺🥺

If ciara and Russell can do a gender reveal from home then all your dusty asses can do them from home!! I’m tired of seeing so many groups partying. I want to go back to normal by summer dumbasses!! https://t.co/CFIdkrNdGm

I want a family like Ciara and Russell, but the universe seem mf’n set on making me a Future type nigga. I don’t understand it 😂 pic.twitter.com/ask9RrUoXa

i absolutely adore what ciara and russell have, their love seems so pure and genuine.

Y’all I’m so happy Ciara and Russell Wilson are having a baby boy. He treats Ciaras son like his own imagine how loved his own son will be. 2 black boys raised in love to become 2 loving black men. Ya love to see it. pic.twitter.com/tJJFtTYTtf

Can someone inform Ciara and Russell I am available for adoption? For free.

I am packed and waiting at the airport. pic.twitter.com/fnk0pBGgrs

Ciara and Russell are expecting a baby boy. At this point I have accepted that their joy is my joy pic.twitter.com/XjfAxfTpKk

Idk the insides of their relationship but Ciara and Russell makes me happy, their happiness seems genuine and I wish that on everyone 💞