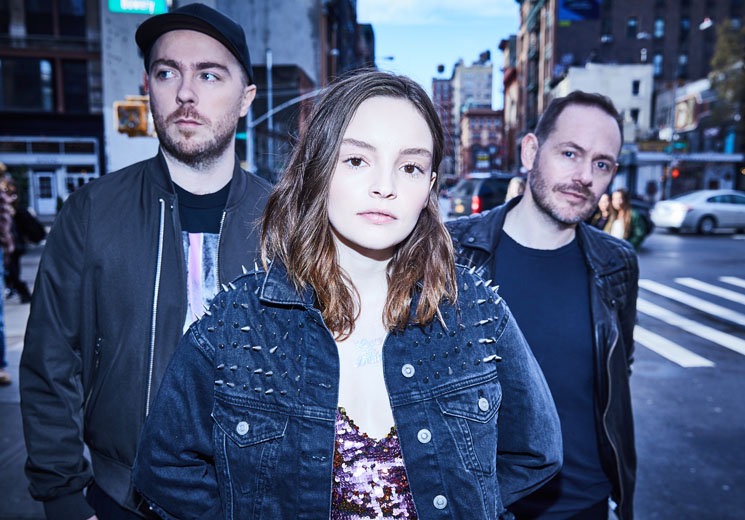 Chvrches just announced their upcoming third album, the Greg Kurstin-produced Love is Dead. But according to the band, who decamped to New York before work began on the new record, Kurstin’s involvement was never a forgone conclusion. In fact, in casting about for a producer (the first time the Scottish trio had looked outside the band for help) Lauren Mayberry, Iain Cook and Martin Doherty tried out a number potential collaborators — what they call “fact-finding” — amassing a huge cache 30 songs in the process.

“It wasn’t about changing our writing] process, it was about finding the right person to fit into the process,” says Doherty. “And that quite possibly could have been no one.”

One the many people who the band considered was Eurythmics’ Dave Stewart. “He’s the first person to poke at us in a way that an old school producer would,” says Mayberry.

The band wrote four songs with Stewart, none which ultimately made the album’s final cut. But their time with the Rock and Roll Hall Famer, who’s worked with everyone from Tom Petty to No Doubt, nonetheless proved fruitful. “He was kind like a creative mentor to us,” Mayberry says, noting that gave the band the confidence to continue on their own path, rather than kowtowing to the expectations others. “He said, ‘Because you don’t fit in the big pop world, but you don’t fully fit in the alternative world, you get the best both. You get to live in the middle and do stuff that a lot other bands can’t do.'” Having someone Stewart’s stature essentially say “come on guys, get your shit together and become the band that you want to be” was both humbling and motivating.

Stewart imparted a sense purpose and confidence into both the recording process and the final record’s assorted pieces affiliated media. “Everything Eurythmics] did was to further the record,” says Mayberry.  “If it’s a picture, a video, you shouldn’t look at that as just a way to sell your record. You should look at that as a way to expand on the story that you’ve made for the people you’re trying to communicate with.”

That vision has been borne out across Chvrches online presence; the band wiped their social media history in January and began posting cryptic videos teasing the album’s themes around a lack empathy in the world. “It’s about frustration and confusion and growing up to discover that the world isn’t as ideal as you thought it was,” says Mayberry. “What do you do with that? You can sit with that sadness or you can proceed.”

One such clip features faux-security footage the National’s Matt Berninger postering for something called “Friend or Foe,” a nod to the song “My Enemy,” on which he sings.

“We’d played a lot festivals with them and we just kept in touch,” says Mayberry. “We had this demo kicking around and we kicked the idea around, like “I can totally imagine him singing it,” but then I had to actually email him. I was like, ‘He’s not going to say yes,’ and within half-an-hour he’d replied ‘Yeah, I really like it, send me the stems, I’ll do it tomorrow.’ He’s the most organized man in rock. It was a real bucket list moment.”