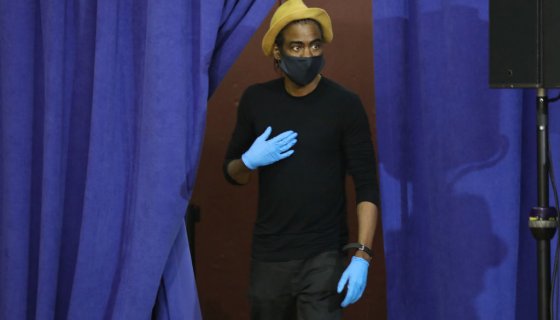 decided to dig in his vault to drop some unreleased material that is both relevant and comedic.

On Monday (Jul 21), took to Instagram to share an unreleased 2003 parody video where he transposed his face on Andre 3000’s body for 3 Stacks iconic “Hey Ya” video. Rock’s version takes a serious but hilariously presented look at race, calling out social injustices at the time that are ironically still an issue today.

With the caption, “Crackers,” the Bigger and Blacker comedian dropped the song noting that it’s from “deep” within his comedic vault.

“🎶Crackers🎶. Here’s a deep cut from the vault.”

This isn’t the first time that has referenced his older material as a social “I told you so,” last week the comedy icon posted a snippet from his 2004 comedy special, Never Scared, where the comedian talked about the difference between being rich versus being wealthy, along with a caption pointing out his point on the subject to address the issue of keeping Black dollars inside the Black community.

“We got some rich ones, we don’t got no wealth,” Chris Rock wrote.

We got some rich ones, we don’t got no wealth.

In other news, the comedian’s latest parental outing lead him to checking an item off of his bucket list, after the 55-year old and his daughter decided to get tattoos for the first time.

According to published reports, the Down to Earth actor got his first tattoo alongside one of his teenage daughters, according to an Instagram post from Bang Bang NYC on Wednesday (Jul 15).

“First tattoo for King @chrisrock and his wonderful daughter,” read the caption. “Thank you for the trust.”

First tattoo for King @chrisrock and his wonderful daughter. Thank you for the trust 🤝 #basquiat Check out our charity and non profits list at bangbangforever.com

Check out the parody below.

Here's a deep cut from the vault.