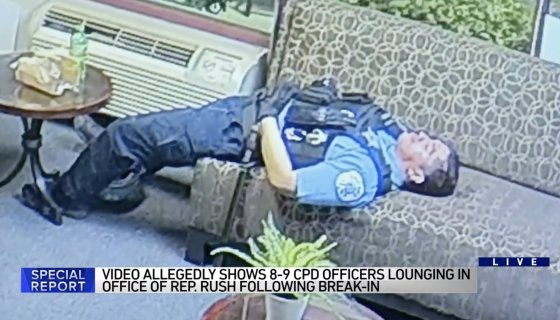 The taking place across America these past few weeks but the latest example of why police can be utterly useless at times come from Chicago where Po-9 broke into someone’s office and took a break from the riots while on the clock.

NYMag is reporting that a press conference was held in Chicago on Thursday (June 12) where Chicago mayor Lori Lightfoot shared still photos of police officers who apparently broke into the campaign office of Illinois representative Bobby Rush and made themselves at home while a whole riot was engulfing the streets of Chicago right outside. Laying on couches, scrolling on phones, and kicking feet up on furniture, the police caught on tape committing dereliction of duty could not better capture why defunding the police is necessary at this point.

“They even had the unmitigated gall to make coffee for themselves and to pop popcorn, my popcorn, in my microwave while looters were tearing apart businesses,” Rush added. “Within their sight and within their reach.” The footage shows as many as 13 police officers, including three supervisors, remaining in his office for a total of four hours, as property damage occurred nearby.

After apologizing to representative Rush for the actions (or lack thereof) by “Jake,” Mayor Lightfoot called the police officers involved a “personal embarrassment” and explained why she felt that way.

“Looting was going on, buildings were being burned, officers were on the front lines truly taking a beating with bottles and pipes, and these guys were lounging — in a congressman’s office. The utter contempt and disrespect is hard to imagine.”

Though the mayor didn’t commit to relieving the officers of their badges, she did state that they’d be pursing “the strongest possible action, particularly with supervisors.”

In other words, they’ll still be policing when it’s all said and done.