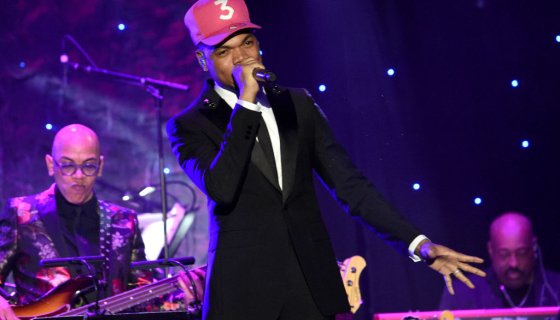 stands as one of Hip-Hop’s most beloved acts but he’s been known for making questionable moves with his platform in the past. Currently, the Chicago star is catching a flurry of criticism after publicly stanning for and the producer’s alleged presidential bid in what appears to be an affront to Joe Biden’s campaign run.

On Sunday (July 12), Kanye West shared a new song and video titled “DONDA” which features his late mother, Dr. Donda West reciting KRS-One’s “Sound Of The Police” before the gospel-tinged track. In the song, West sounds politically charged, calling out false leadership, the prison system, and shouting down racism while honoring his mother and grandmother within.

In loving memory of my incredible mother on her birthday 🕊 My mom reciting KRS1 lyrics This song is called DONDA pic.twitter.com/YWKhqYYu2E

Chance retweeted the post and wrote in the caption, “And yall out here tryna convince me to vote for Biden. Smfh.”

He continued tweeting in support of West, much to the dismay of his fans and others.

“Are we pro two-party system?” Chance asked. He followed that with, “Ima keep it real alota u n*ggas is racist” but the context isn’t completely clear there.

Continuing his track of tweets, Chance posed the question to his followers that seemingly challenged Biden’s run and if observers are against his friend and mentor.

“Are u more pro biden or anti ye and why? I get that you’ll want to reply that you’re just tryna “get trump out” but in this hypothetical scenario where you’re replacing Trump, can someone explain why Joe Biden would be better??” Chance wrote.

Chance ended that particular string of thought with, “yall trust Ye. I think I understand why, I just don’t feel the same way.”

With Chance The Rapper trending on Twitter, the artist addressed the fervor around his decision to cape hard for Yeezy.

“I didnt plan on trending today, but I would like take this opportunity to say: with all these apologies and accountabilities going around the city of Chicago and the Chicago Police Dept should finally admit to and denounce the assassination of Fred Hampton,” Chance said.

Via Twitter, the reactions to Chance’s endorsement of Kanye West have been ringing off all Monday morning (July 13) and we’ve got some of them listed out below.

For the last time, Kanye West is not seriously running for president. He has already missed the filing deadline in several states to appear on the ballot. He has zero chance of being elected. Anyone who tells you to vote for Kanye is essentially telling you to support Trump. pic.twitter.com/PBS5T1q4aW

Chance the Rapper trynna get another Ye feature pic.twitter.com/PnPpWzou9W

Terry crews and chance the rapper battling to see who can make their pr team work the most pic.twitter.com/kJek88P5yC

i understand Chance feels affection for his hero but you gotta leave the grenade catching to bruno mars. he should implement a criteria for defending Kanye like "consult john legend" or "log off" or something

Chance the rapper running his mouth don’t affect me.. cus I ain’t really listen to his shit anyway. pic.twitter.com/NL8HWJdkax

didnt we already do this w chance once? 😕 pic.twitter.com/AFrSpGBt1F

So Kanye offered Chance a position in his fake cabinet and now we have to listen to him pretend like this Birthday Party nonsense is real.

Stop it. You're being ridiculous.

He missed the ballot deadlines for key states. Let's all stop this.

Can’t wait for Ye, Talib & Chance to go on the breakfast club to talk about how racist Progressive Black Women are. Gonna be great!

Did you by any chance read where Kanye stands on a lot of issues which are very similar & some worse than Trump, or no?? You just sucking Kanye’s dick a second time on the tl. Shut the fuck up. https://t.co/csY16srSnh

Chance too smart to be that stupid

This question from @chancetherapper is an opportunity to revisit the idea that being president isn’t a job you need to be qualified for. It’s not just about your views. It’s also your ability to get things done in this job. Kanye, like Trump, has no track record in this arena. https://t.co/IiDrUNqFBX