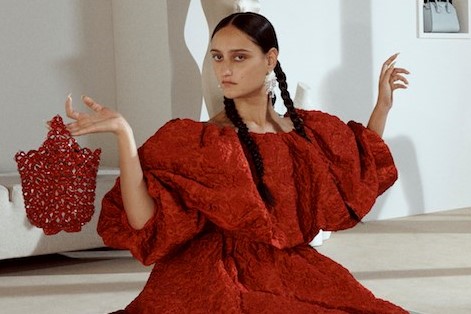 For those looking to carve out a space for themselves on the London fashion scene, a trip to iconic South Molton Street boutique Browns is pretty much a rite of passage. Founded back in 1970, the store has established trends, set young designers up for success – either by stocking their designs on its extensive rails, or giving them a taste of the industry via shifts on its shop floor – and pretty much set the standard for exactly what a high-end fashion store can be.

Founder Joan Burstein (or, as she’s better and more affectionately known, ‘Mrs. B’) is not only the reason you’ve probably, at some point, slipped your foot into an Ugg, she’s also a driving force behind some of fashion’s biggest success stories, championing young, emerging creatives with as much enthusiasm as she did the industry’s established blinding lights. Famously hedging her bets on John Galliano by sweeping up his graduate collection straight off the runway – a story now deeply entangled in fashion folklore – Mrs. B was also one of the first to introduce Alexander McQueen, Jil Sander, and Rick Owens to the world.

Now, the boutique is celebrating its 50th birthday, albeit a little later in the year than anticipated thanks to a little virus you might be familiar with, and while one of its legendary and extremely wild parties if off the cards, the Browns family couldn’t let the occasion slip by without a celebration. Bringing together a group of friends and collaborators for a new shoot that throws it back to a Browns ad campaign from the 70s, the likes of Shygirl, Zawe Ashton, Chantel Foo, and Jess Maybury star alongside Fashion East newbie Maximilian Davis and Simone Rocha, with many of those featured wearing exclusive collaborative pieces designed in honour of Browns’ big 5-0.

With designers including Charles Jeffrey, Craig Green, Off-White, Loewe, Fendi, and Collina Strada all invited to collab on limited edition garments or full-blown capsule collections, the store is set to continue dropping them well into 2021. Unsurprisingly, the anniversary of the store’s grand opening has also got many of those involved ruminating on their own relationship with Browns and the ways in which it’s played into their careers.

“For me, it really represents my beginning, they were the first to give me my start,” says Conner Ives, who already has one capsule offering with the boutique under his belt. “We launched that on Valentine’s Day. I’d been through a messy thing with a boy and was feeling a bit ironic putting forward one of my proudest achievements on a day that I’d be encouraged to be spending with someone else. We hung about 200 calla lilies and roses from the ceiling in Browns East and it was the moment I realised just how special this was, and how I didn’t need anybody else to feel pride or a sense of accomplishment. This was all between me and Browns, and I realised that trumped any concept of a boyfriend.”

Meanwhile, Charles Jeffrey and Maximilian Davis talk of their ‘oh my god I’m stocked in Browns’ moments. “I remember walking past the store and there was a full shop window about me,” explains Jeffrey. “I must have missed the memo about it, but I literally gasped in the street and went ‘Oh fuck, that’s me!’ It was such a great feeling,” with Davis adding how ‘super excited’ he is to see his designs stocked in the store. “Receiving that confirmation order from Browns for my collection was amazing,” he says.

With CEO Holli Rogers continuing to drive the boutique forward into a new era, coming imminently is a new flagship launch, on London’s Brook Street. “Browns is an icon, and what we really wanted to do when I came on board was re-establish it as the icon so many people knew it to be,” she explains. “It stands for community, innovation, curation, family, and ultimately the joy in fashion.”