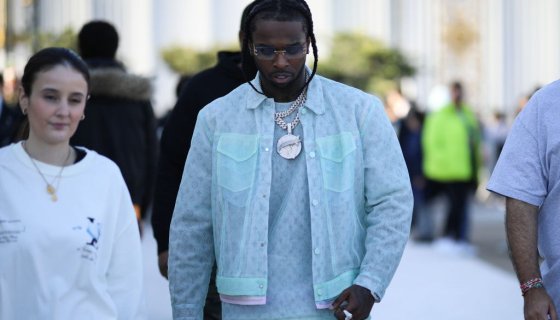 The Los Angeles County Coroner’s Office has unveiled the completed autopsy of which revealed the cause of the buzzing young artist’s death. According to the coroner’s report, the 20-year-old Brooklyn Hip-Hop star died as a result of a gun wound to the torso.

The report from the medical examiner was published Friday (Feb. 21) and revealed that the of the artist born Bashar Jackson had the body released to them. Pop Smoke was gunned down on Wednesday (Feb. 19) in a Los Angeles home in the Hollywood Hills neighborhood, and speculation remains high that he was the target of a planned hit.

Adding to this, Smoke was reportedly connected to gangs in New York which had him recently canceling a show back home due to a potential skirmish between warring factions. Authorities investigating the case say that they are examining potential gang-related avenues regarding the incident but they have yet to name suspects in the case.

Pop Smoke’s girlfriend, Yummy, posted a heartfelt message to Instagram revealing that while she wasn’t initially open to love, she eventually warmed up to the “Welcome To The Party” star.

“We taught each other self-awareness. He was rare. Never once did he try to change me,” Yummy wrote in the Instagram caption featuring a video of the pair. “He was so resilient. Nothing could bend or break him. He made sense out of everything and if he didn’t understand, he would ask you questions, lots of em.”

She added, “Pop I love u. I adore u. You exceeded my expectations as a man. I tried to protect u from everything, u know that.”

I’m a mother before anything but, a lover? Not so much. The more I get to thinking, I realize I tend to have a cold heart but, you melted mine so quickly. We taught each other self-awareness. He was rare. Never once did he try to change me. He was so resilient. Nothing could bend or break him. He made sense out of everything and if he didn’t understand, he would ask you questions, lots of em. He never ceased to amaze me with his honesty, I knew everything, I mean everything. He told me he never trusted a girl before but, he was willing. After a while, we explored each other day in & day out. Determined to find things out about each other that no one else knew. On V-Day, I was estatic cause u said I deserved my gift. You went on to say I kept u balanced and I said u kept me grounded! I longed for a pure transparent love like ours. U got that watch to let me know everything we want and desire was now in arm’s reach. Since Mid January U started movin super careful with me. I can’t sit & say I wish I hugged u more before u walked out that door Monday cause I hugged u all night before that flight to Cali. Can’t even say we should of said I love u more that night/morning cause we said it over 20 times. U even came back after leaving the house & said “didn’t I say lock the door?,” with your 2 pigtails cause ya hair wasn’t braided over yet😩 Babe ur growth in everyday life & the industry was like nothing I’ve ever seen. Meet the Woo2 was ahead of it’s time. That’s not a mixtape. That’s an album! Do ya’ll kno he does all this music off the top? No pen, no pad, nothing!? Pop I love u. I adore u. You exceeded my expectations as a man. I tried to protect u from everything, u know that. For anyone who ever loved him, or still loves him, I understand. If you loved him, I love you. Whether its one girl that loves him or 800, he was loved in abundance, period! To all the fans that sent me literally thousands of dm’s, he loves yall & thank you! The sound & vibrations of yall when he hit that stage gave him life! His legacy & his name is not to be FUCD WITH! Pop, I won’t stop loving u! & I GOT U FOREVER💫 On everything, EVERYTIME they see me… Imma make sure they Woo💙💔 🙏🏽