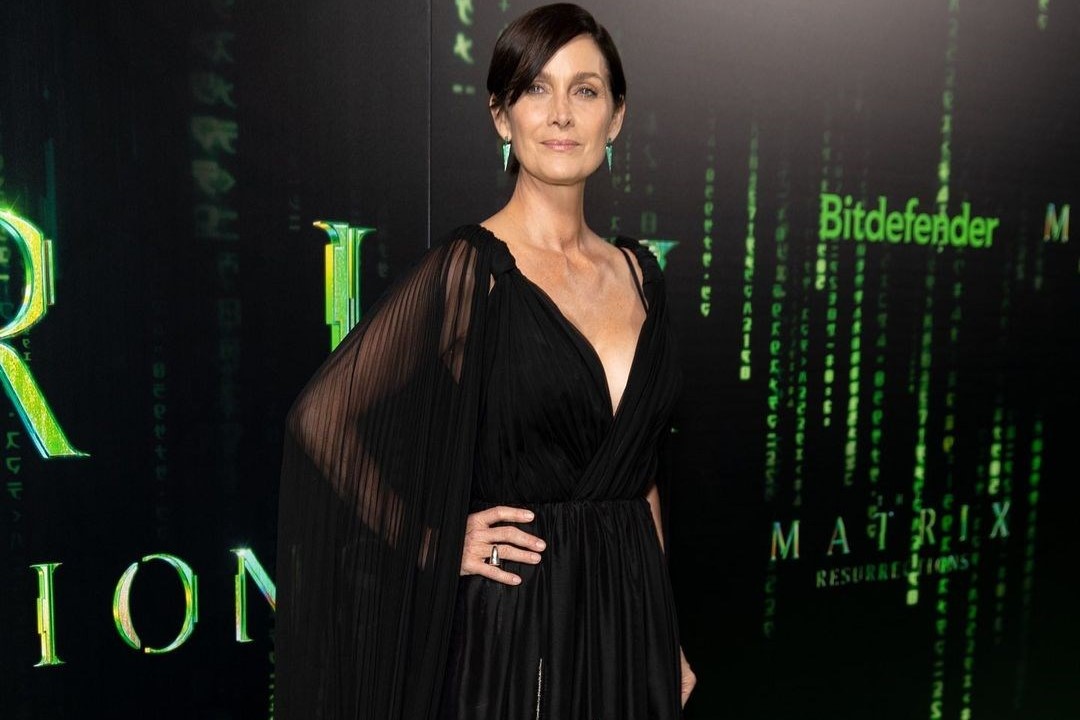 Carrie-Anne Moss – AKA Trinity – showed up to the San Francisco premiere for the latest Matrix film looking as though she was about to glitch herself into cyberspace. Still better than the vast majority of the fashion being hawked in the metaverse, the racing, sequined stripes of her red carpet look were not an homage to the current moment in crypto-couture but the computerised, neon code which has come to define the franchise.

Taking a break from dressing almost every character in almost every scene of And Just Like That, Laura Kim and Fernando Garcia of Oscar de la Renta were the brains behind Moss’ gown. Forged from silk chiffon (which is having a good year more generally in culture) the dress was finished with sequenced threadwork of green and silver sequins, redolent of Matrix’s digital rain. Though it has become a motif within fashion more widely – see Vetements SS22 for example – the neon hieroglyphics had less lavish origins. Simon Whiteley, the movies’ production designer created the Matrix code by scanning the characters from his wife’s Japanese cookbooks. “I like to tell everybody that The Matrix’s code is made out of Japanese sushi recipes,” he told CNet back in 2017.

Valentino is transforming its Instagram into a platform for young designers

Since Trinity and Neo appeared to die at the end of the Matrix trilogy, the franchise’s fourth instalment The Matrix: Resurrections has been met with speculation by die-hard fans, who have spent the past few months feverishly hypothesising as to how the couple managed to evade death. Speaking as part of a panel on screenwriting at this month’s International Literature Festival Berlin, Lana Wachowski shed light on how her decision to resurrect the protagonists came after the death of both her parents and a close family friend.

“My brain has always reached into my imagination and one night, I was crying and I couldn’t sleep, and my brain exploded this whole story. And I couldn’t have my mum and dad, yet suddenly I had Neo and Trinity, arguably the two most important characters in my life. It was immediately comforting to have these two characters alive again,” she said. Other notable attendees of the film’s premiere include Anok Yai who walked the red carpet as an embattled warrior-type, wearing crimson Jawara Alleyne which had been knotted, draped, and cinched across the body.