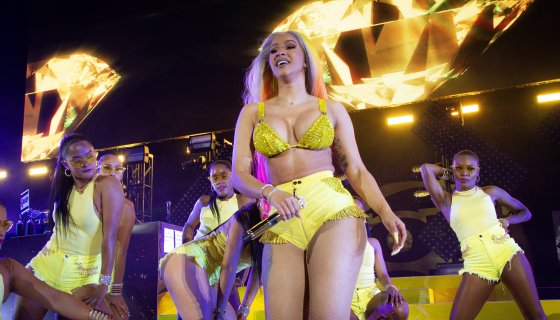 Two years after the release of her Grammy Award winning debut album, Invasion of Privacy, is ready to release her first single off her next project and it is featuring the other hottest chick in the game.

Yesterday (August 3), the Bronx bomber took to her social media account to release the artwork for her new cut, “WAP,” and in the creatively provocative post was none other than with her wig weaved up with Cardi’s while showing off what they mouth can do, aesthetically. Though there wasn’t even as much as a snippet to accompany the seductive post, the back-to-back pose is more than enough to have fans anticipating the collaboration when it drops this Friday (August 7).

The release couldn’t have come at a better time for Megan Thee Stallion who’s looking to turn the page on the incident that went down with Tory Lanez a few weeks ago that ended with her getting her feet clapped up like they recorded “Ghetto Quran” or something.

Cardi meanwhile is using the release to coincide with the relaunch of her website CardiB.com which will let fans copp the single in both digital and vinyl form upon it’s release. Clever woman.

Check out the artwork below and let us know if you’re excited about the upcoming single.