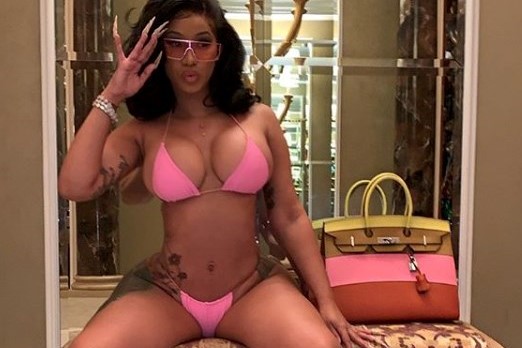 If you follow Cardi B on IG, chances are you’re fully aware of just how many Birkin bags the legendary rapper has in her closet. With camo, crystallised, and classic versions among her archive, she recently added a new Kylie Jenner-gifted iteration, as well as not one, not two, but four of the covetable and uber-expensive totes to her line-up, courtesy of husband Offset (and that’s before we get started on baby Kulture’s mini collection).

Not everyone is happy to see the “WAP” rapper thriving however, with a bunch of Twitter trolls claiming she and other women in hip hop are depreciating the value of Hermès’ iconic bags. Notoriously hard to get your hands on, the style costs upwards of £10,000, and for most, comes with a lengthy stretch on the French house’s waitlist, which, for the most part, celebrities like Cardi manage to bypass.

Now, in a new video posted on her Instagram last night, Cardi has hit back at the comments, questioning why the likes of herself, Megan Thee Stallion, and Saweetie are often called out for owning a Birkin while other, largely white celebrities get away with it without comment.

“Why is it that y’all are asking female rappers if they can get an Hermès bag from the Hermès store,” she asked. “Y’all don’t do this to these white celebrities, so why is it that you gotta be asking us, like what the fuck?” She also noted it wasn’t just rappers that were subjected to judgement as to how they got their hands on a Birkin. “Why when a Black girl or a Hispanic girl has a bag, y’all have to question whether ‘oh is it fake?’ or ‘she’s a scammer’, or ‘she’s fucking (someone) for it’ Actually, there’s a lot of boss ass bitches out here.”

Also addressing the claims that rappers owning Birkins depreciates their value, Cardi confirmed “Actually we add value. When brands get mentioned in hip hop, that shit go up.” Heavily referencing Christian Louboutin in breakout single “Bodak Yellow”, Google reported a 217 per cent rise in searches for shoes by the designer in 2017, with Cardi also claiming a mention of Balenciaga’s signature sock sneakers in “I Like It Like That” led to her being made the label’s AW20 campaign face.

This racist rhetoric is nothing new when it comes to hip hop and high fashion, with brands historically distancing themselves from rappers in fear of ostracising their wealthy, white clients – although it didn’t stop them mining the genre’s aesthetics for inspo and claiming them as their own. With rappers becoming campaign faces, landing on the runway, popping up front row at pretty much every fashion show worth going to, and brands like Gucci teaming up with OG bootlegger Dapper Dan, things have come a long way in recent years.

As for the trolls pissed at Cardi and her impressive collection of Birkins? Better get used to it, tbh: “I got four bags today from the Hermès store today,” she added in the vid. “I don’t wanna brag but like don’t even try it with me.”