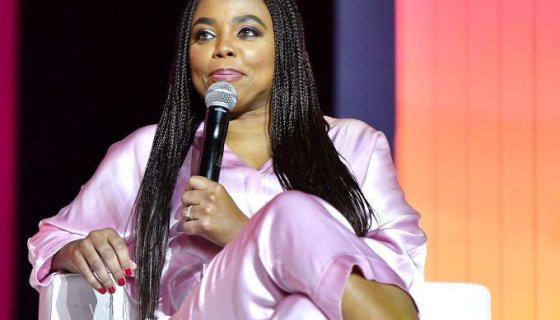 is a sports journalist and cultural critic who always seems to piss off the Far Right—so she’s cool with us off g.p. Today (June 29), #CancelJemele has been trending due to a transphobic tweet from 2009, but it’s actually a thinly veiled attempt by the aforementioned probably most likely racist frat bros to get her out the paint.

Apparently, the MAGAts and Klan neophytes, allegedly, got butthurt when Hill came for one of their life goals—Barstool’s Dave Portnoy. The founder of the sports site with supposedly and well documented racist tendencies was taken to task for, you guessed it, a racist moment involving the equating of Colin Kaepernick, Arabs and terrorism.

This is terrible, but then again, consider the source. https://t.co/1NzbNXP163

It was just as bad as it sounds, but Portnoy doubled down, saying it was just comedy and Barstool is “uncancellable.”  He also said he was merely being taken out of context.

What’s terrible is altering and cutting up a comedy sites video and giving no other context. Why was this part cut out? Oh because it didn’t fit the agenda. https://t.co/cPsk3wL8MD pic.twitter.com/9IwKZiOeU5

Memo to the cancel cops. I knew this was coming before you did. And I’m ready. You don’t cancel me. I cancel you. #CamNewton #DDTG #SUPERBOWL #FUCKCORONA #stocksonlygoup pic.twitter.com/JmuDQhbzXf

So the Barstool Bros dug up an old tweet from 2009 from Jemele Hill that was egregiously transphobic. She addressed the tweet, didn’t condone it and said she kept it up to prove she has no problem making amends and convincing the trans community that she’s actually an ally (the tweet was removed, but this is the Internet).

We cannot continue to let transphobic people have a voice. #CancelJemele pic.twitter.com/wVVfWtTPIw

“For context, the tweet was in reference to Manny Ramirez testing positive for the woman’s fertility drug, gonadotropin. It was wholly ignorant, dumb, and offensive. I am ashamed that I was so uneducated about trans issues at the time. I stand with this community firmly today,” she explained. “I kept the tweet up because I welcomed the opportunity to apologize and to show growth. See, unlike some people, I’m not defensive about my moments of failure. I learn from them and own it.”

She added, “I don’t care about Dave Portnoy or any of the other Barstool sycophants RT’ing this into my TL, like it’s some gotcha moment. I care about the trans community I belittled and offended. If they don’t see me as an ally because of this, it’s my job to show them that I am.”

Let me address this. I saw some folks circulating this tweet from 2009 in my TL after I criticized Barstool’s Dave Portnoy for a racist skit that went viral yesterday. Let me explain why I kept this tweet up when it was brought to my attention: https://t.co/Fdlwd2qF9u

And that’s that on that. Note the contrast with Portnoy, who clearly thinks his antics are just jokes and is like, whatevs.

As for the hashtag, a quick perusal of the trending topic’s most rabid participants makes it clear exactly who is so hardpressed to cancel Jemele Hill—privileged white guys who can’t fathom the idea of a Black person, let alone a Black woman, taking them to task. Seriously, these dudes look and sound like they’re not even worthy enough to type out her tweets for her.

And of course we’re not saying all white guys are threatened by Black women. But hey, hit dog will holla and all that. Because if you’re defending racist ish, you’re racist, too.

If you don’t believe us, see some of the offenders below. Also, many people clearly see the jig for what it is. Let us know what you think in the comments.

A talentless hack who uses the color of her skin, gender, and affluent life to demean people on the other side politically from her. She panders, yet is a giant hypocrite of her own.

And she jokes about trans people. #CancelJemele

When your job is to react immediately and give polarizing opinions, its foolish to attack people for doing the same exact thing. Someday they'll come for you, and you don't have their talent to save you. #CancelJemele

I can't stand cancel culture. I believe that it is one of the absolute worst things social media has brought us. That's why it is so hard not to revel in such a cancel-happy hypocrite as #CancelJemele being served up her own form of social justice.

4. Notice a pattern yet?

So @jemelehill can say she regrets a transphobic tweet from 2009 so it’s no big deal, but a clip of a years old @barstoolsports rundown that they’ve admitted are jokes they wouldn’t make again is inexcusable… Hypocrisy thy name is Jemele #CancelJemele

@jemelehill those who live in glass houses shouldn’t throw stones…. do everyone a favor and cancel yourself #CancelCulture #CancelJemele pic.twitter.com/74m3NG0G1L

This #CancelJemele shit hilarious. Most you MFs ain’t give a fuck about trans people and how they felt until you found out someone you don’t like used the word “tranny” in a tweet 11 years ago. Now it’s “How DARE she!?” pic.twitter.com/4koStHdfSk

If they're working THIS hard to #CancelJemele, than that means she's definitely worth keeping. So y'all can kick rocks with that bewlchit. @jemelehill. #ThatsOURSista #ShesWitUs pic.twitter.com/QqRhxPLvBc