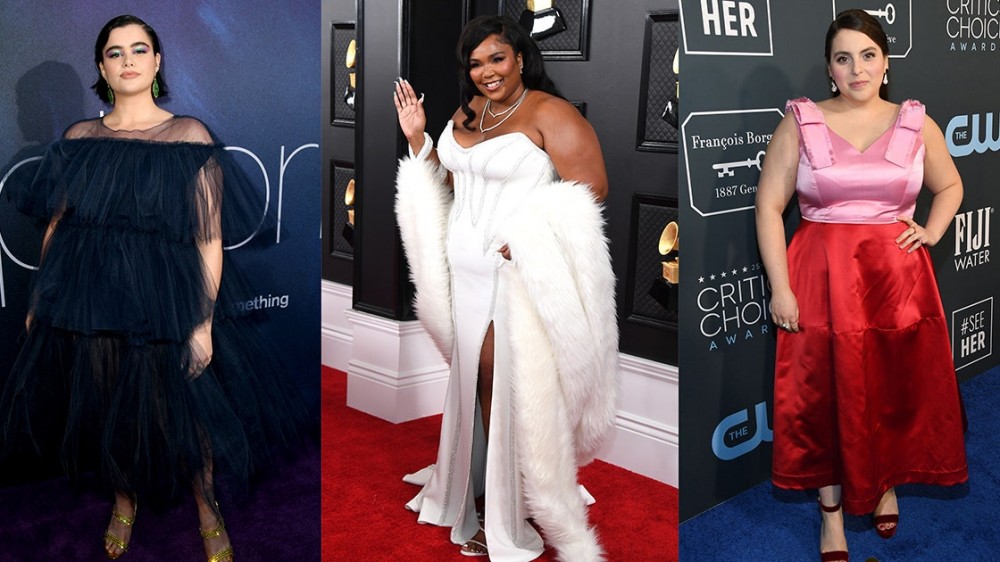 I am only here for the red carpet looks has been my response to anyone wondering why I’ve been watching award shows from 2005 till present. I want the glamour. I want to be swept up in the pageantry of garments made for a once-in-a-lifetime event, and mostly, I want to live vicariously for a moment in the world of celebrity and spectacle. Over the last decade, it has filled me with such joy to see the diverse body representation at award shows only grow from year to year. It brings the glorious existence of celebrities that look like me, wearing the gowns my teenage dreams were made of. Shannon Purser at the 2017 Emmys wearing Sachin & Babi, Danielle Brooks at The 49th Annual NAACP Image Awards in Michael Costello, and Beanie Feldstein at the 2020 Golden Globes in Oscar De La Renta. What I wasn’t prepared for, though, was the discomfort and cognitive dissonance of both rooting for plus size celebrities to exist in stardom, while simultaneously feeling entitled to deem their fashion choices as pass or fail.

I felt this acutely during the Golden Globes, when I came across a tweet that Amanda Richards, the creator and host of Big Calf podcast, wrote about Nicola Coughlan. “The fat girl from Bridgerton is wearing a black cardigan at the Golden Globes, bc no matter how hot and stylish you are, if you’re a fat girl there will always be a black cardigan you think about wearing, then decide against, but ultimately wear bc you feel like you have to.”

I didn’t question the personal bias of her words, or pause over the possible reasoning why Nicola (and her stylist Aimée Croysdill) preferred the look of the Molly Goddard buttercup-yellow tulle dress topped with a black cardigan. I was too preoccupied remembering the precise moment I started to fear my arms. The sticky summer day in my early twenties when I caught the reflection of my bare arms in the rearview mirror, and the way they looked pressed against my body, tumbling out of the sleeveless black and white striped Marc Jacobs sundress I was wearing. And I remember thinking, despite the sweltering heat, that I really should be wearing a black cardigan.

That was the moment I decided my arms weren’t suitable for public consumption, heralding in a period of deep body shame that dictated what I SHOULD wear. (Nearly a decade later, I entered the ‘burn-your-cardigans’ period of defiant self love and remained there). So when I saw another fat person calling out the fashion choice of a celebrity as one rooted in obligatory shame and not sartorial choice, I didn’t see the harm in speculating motivation or frankly passing judgement on what a celebrity chose to wear to an award show. I just felt the quiet kinship of being fat, reflexive dressing habits that I still carry like a vestigial organ since that hot July afternoon.

Following the Golden Globes I found myself spiraling, devouring award show best dressed lists from 2010 on. I googled phrases like red-carpet-plus-size-backless-dress, desperately trying to find proof that we have somehow moved beyond the limited red-carpet fashion options Gabourey Sidibe struggled with in 2010, Octavia Spencer and Melissa McCarthy called out in 2012, and Leslie Jones called out in 2016. “Two Oscars ago, I couldn’t find anybody to do a dress for me. I asked five or six designers — very high-level ones who make lots of dresses for people — and they all said no,” McCarthy shared in a Redbook interview in 2014. I came up wanting in my search. Instead I found the same select designers being worn again and again (honorable mention to Christian Siriano for consistently designing enviable red carpet looks for plus size icons), and quotes from my current favorite plus size actors like Aidy Bryant, Shannon Purser, and Barbie Ferreira reiterating the same demeaning wardrobe struggles. These stories reflect the inescapable truth that even if you somehow claim one of the very few roles for plus size actors and are nominated for an award, designers will still refuse to dress your body and you’ll be relegated to the seemingly endless parade of sleeved dresses as is to be worn on the red carpet by anyone above a size 12.

Kat Eves, who has styled plus sized comedians and musicians like Dulce Sloan, Mary Lambert, and Kristen Bartlett, reiterates the difficulty of finding an event worthy dress, “When we are talking about sourcing for red carpet for plus size, the number of designers who have something ready to go gets smaller and smaller the larger the size, so most of the time if it’s a bigger event like the Emmys, it’s going to be a custom gown, that the client will likely be paying out of pocket for.”

Other difficulties, Eves mentions, include finding a designer that won’t make comments about the client’s body, ensuring that another plus size celebrity isn’t already wearing (or have worn) a specific dress, and the reality that intersectionality is always at play, that it is that much harder to find designers willing to work with plus size Black celebrities.

Eves did say that, as we’re seeing with mainstream fashion, there are more options within plus size evening wear. But even after a dress is found, there are always the comments from the press, the fashion elite, and the general public. Eves tries to protect her clients from this, but acknowledges that’s just not realistic. “Anytime anyone passes an opinion on your body or how you choose to dress it, they are bringing their own baggage and their own trauma into it,” Eves says. “Oftentimes when we are saying something unkind about something else, it’s because we have our own feelings of helplessness, the choice to bully is a way to feel a momentary hit of power. But you can know all of that, and still hurt when you read those remarks.”

With lacking body representation in Hollywood, the scrutiny of plus size performers is only further magnified. We (the plus-size community) are stumbling as we voice our opinions on celebrity style choices, projecting our body-trauma and the unspoken expectations that they have to “succeed” for us. When in reality, we are not the ones on the red carpet.

The questions of fairness came up when I spoke with Amanda Richards (who readily admits that there are complicated and nuanced implications to labelling any person who has never used ‘fat’ as a descriptor for themselves). “Maybe we do unfairly project a lot onto fat celebrities, but the lack of fairness is something that is intrinsic to the way we (fat people) live our lives,” Richards says. “Being a fat person in the modern world is not a fair existence, so yes we do unfairly put a lot onto the very few people who represent us in the public sphere.” It’s much easier to tweet than to dismantle the anti-fat pillars of the fashion industry, and as Richards explains, “That criticism, that projection is not fat people projecting onto the celebrity, it’s fat people projecting their rage onto an industry that fails them constantly.

I naively clung onto the belief that if I somehow became famous enough, I’d transcend the anti-fat bias, the body shame, the complexities of being fat and craving designer labels. So when I see celebrities who look like me and still marginalized with limited roles and limited closets, I am livid. Where are their racks of dresses with plunging necklines, beaded bodices, and bare shoulders? There is simply no way to criticize red-carpet sartorial choices on plus size stars without also acknowledging how limited the options are.

By coincidence, #FatBabesInLuxury, a social campaign calling out the lack of aspirational and luxury representation started by Nicolette Mason and Katie Sturino, has trended within the plus size fashion community this week. It is a call to action for plus size individuals to share their wants and desires within the world of luxury apparel, and by extension has already increased visibility of plus size people wearing luxury garments. It reiterates that plus size people deserve luxury, whether the industry is committed to our bodies or not, and whether we find ourselves on a red carpet or not.

After a month of struggling to find the exact point my own celebrity expectations edge into toxicity, I realized it’s never been a question of ‘did this celebrity wear the right thing?’, it has always been why isn’t the fashion industry giving plus size people what we deserve? If the red carpet glamour exists for merely a moment, it’s time we fight for something more permanent. The fashion industry needs to be held to account, and hopefully conversations like this lead to more choice for plus sizes, whether that’s a simple cardigan or backless couture dresses. I want it all.