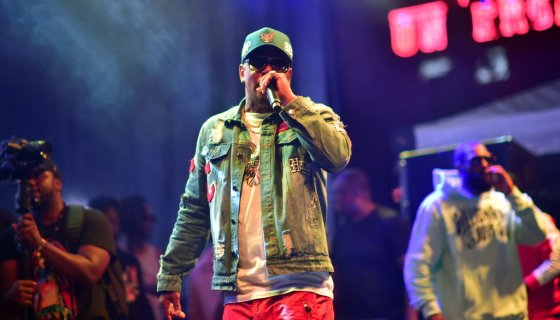 Looks like ‘s about to come back with a connect that’ll turn him into a “Crack Gawd” for real for real.

Unbeknownst to many, Cam’ron recently took a trip down to Colombia to shoot his latest visuals to the Brendan Cochrane and self-directed visuals to “Medellin.” But not only did he visit the town of cocaine kingpin legend Pablo Escobar, but Killa was even joined by the family of the iconic druglord who welcomed them into their home with open arms.

Joining Pablo’s brother and co-founder of the Medellin Cartel, Roberto Escobar at his estate in Medellin, Colombia, Cam’ron uses the luxurious, yet humble property as the background for his video where he politics with Esobar’s family before playing soccer with the locals on a basketball court. We’re pretty sure Cam took the L on that soccer game. Ultimately the people of Colombia had so much love for Cam that he even got his own mural drawn up in the barrio.

This was dope on so many levels. Had he done this when Blow dropped in the late 90’s it would’ve been a wrap.

Check out the visuals to “Medellin” below and enjoy the moment.