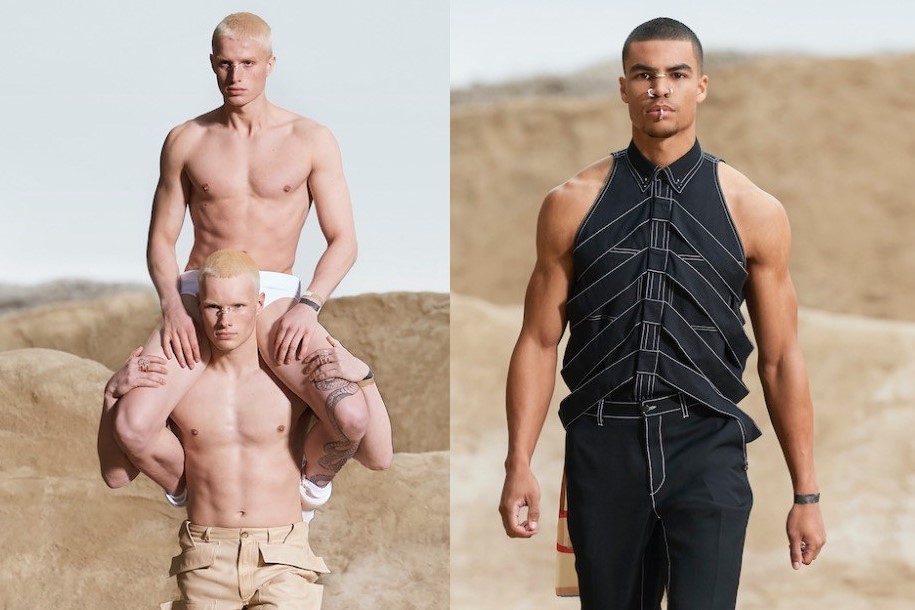 God, what I wouldn’t give to be at a rave right now – all sweaty bodies jostling against one another, eyes like saucers in the darkness, the far off throb of techno coursing through my limbs. While many had June 21 marked in their diaries as the moment they could finally go mad, sadly Ms. Rona had other ideas. Last week, the government pushed back ‘freedom day’ for another month thanks to another surge in cases in the UK – meaning sadly, for now, partying is still largely off the cards. Thankfully, Riccardo Tisci was on hand to give us a glimpse at what the future holds, by throwing a rave-cum-fashion-show at PFW that showcased his SS22 menswear collection. Here’s everything you need to know.

THE INVITE WAS A BLANKET

After sending editors a Burberry logo-emblazoned pillow ahead of his AW21 show, this time around Tisci completed the set with a matching blanket. Last season the idea was to take a moment to dream, whereas this season… well, both items together would make an extremely comfy spot to settle down in at the afters, put it that way.

BURBERRY TOOK OVER AN ABANDONED MILL IN EAST LONDON

…aka a prime illegal rave spot if ever we saw one. As models made their way across the otherworldly, almost post-apocalyptic terrain – past pulled-up cars and sound systems – others congregated under the derelict foundations of the building that once stood there, swaying and moving their bodies in time to the pulsating soundtrack. With Tisci speaking of unity and freedom in his show notes, the whole thing served up ‘first rave in a new world’ vibes – particularly if the collection was anything to go by.

If the show’s setting felt a little like we’d left the earth behind and landed on an uncharted planet, the models themselves served only to reinforce this idea. Dressed in utilitarian leather with straps criss-crossing up their legs and around their torsos, or androgynous tunics paired with boxy shorts, the SS22 collection felt like a futuristic, sci-fi-inflected uniform for those taking their brave first steps in this new, unexplored world.

With styling by Dazed’s IB Kamara, the offering mirrored the cool, natural tones of the setting in a palette of beiges, burgundy, and black, and featured a series of looks bearing exoskeletal-like details and accents. Not only did this bring to mind some of Tisci’s seminal work at Givenchy, but also served to enhance the idea of human evolution that bubbled under proceedings – an idea backed up by the rebellious faux glass facial piercings that many models were seen wearing. Elsewhere, leather harnesses and chest rigs spoke both of body armour and Berlin darkrooms.

THE COLLECTION WAS CALLED UNIVERSAL PASSPORT

…a message that was plastered across oversized tees, boxy shirts, and a succession of accessories. A comment on our current state and the restrictions we’re facing right now? Quite possibly. Roll on Tisci’s 2022, when surely we’ll finally be leaving them behind.

Click through the gallery above to see the collection.