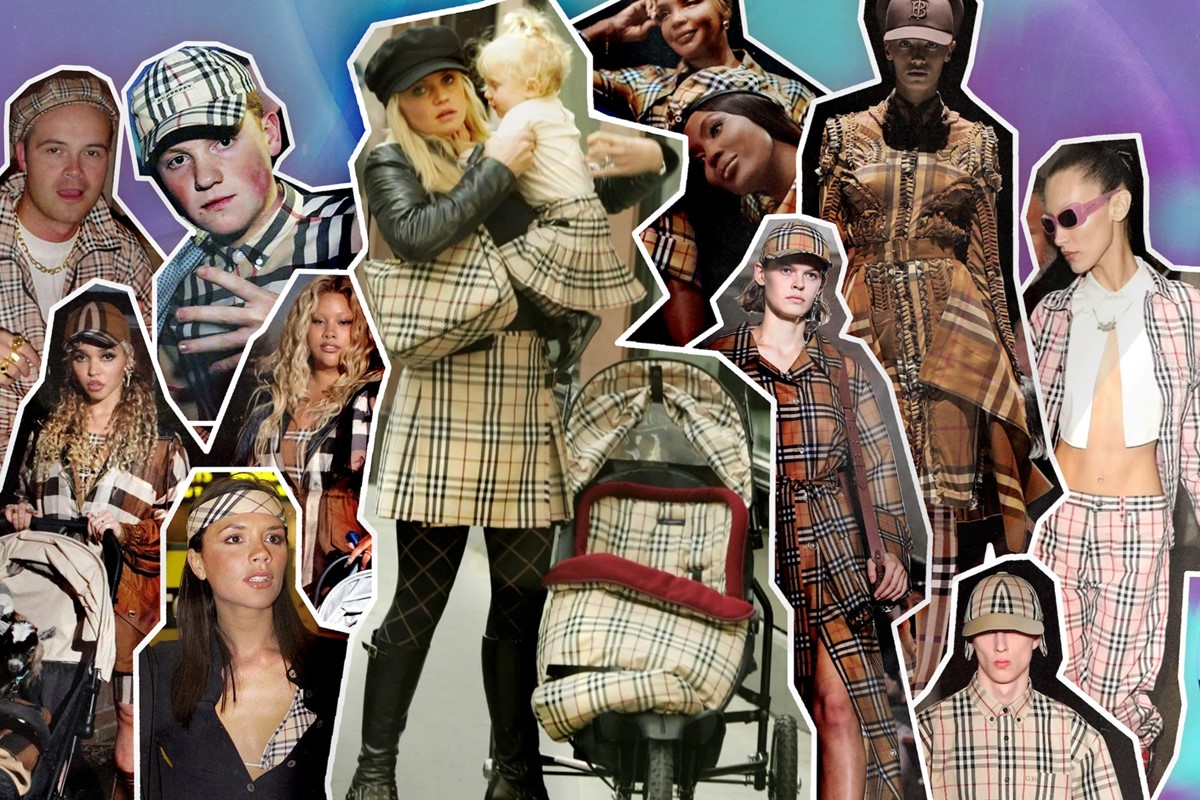 It’s been 20 years since Daniella Westbrook was labelled ‘chavtastic’ for wearing full-look Burberry, and yet the nova check remains a weathervane for the UK’s turbulent relationship with class

100 years since its inception, the nova check is a hieroglyph. To the outside world, its chequered panes point towards a sense of privilege, sophistication, and history, but inside the UK, its appearance within the mainstream has always stirred the kind of passions that have been harboured deep within the guts of the class system; once erupting like pustules into venomous tabloid headlines and city-wide bans for its association with the working-class. And yet despite – or rather in spite of – its divisive past, Burberry’s check has been reclaimed, bringing fashion’s relationship with class into a state of confusion.

Over the course of the past decade, designers have increasingly repackaged the kind of clothing popularised on football terraces and inner-city estates as luxury goods. In couturifying the blue-collar worker, they seem to have shifted the tenets of high fashion further from its physical attributes (artisanal and expensive) and closer to its symbolic (cerebral and expensive). Balenciaga, for example, is not the “hottest brand in the world” because of its craftsmanship, but because of the way Demna toys with dominant notions of taste, plundering from the street and forcing fashion to rethink its relationship with working people.

Meeting the cast of Ck One’s new campaign, a story of American youthone future #ckone captures the perspectives of young Americans from across the country, shot by seven photographers in their home towns

As high-end labels strive to be both unavailable and everywhere at once, the very concept of desirability is still built on the haves and the have-nots. And the dissonance between what fashion sells and who it sells it to has been the ire of social media, which often warns against the perils of fetishising working-class aesthetics, with many pundits pointing towards private school kids and their reappropriation of the Burberry plaid to illustrate their point – conjuring the caricature of the ‘rah where’s my baccy’ student in her thrifted sportswear and Holland Park townhouse. But given just how ubiquitous streetwear has become, this is an oversimplification of the ever-shifting aesthetic standards that govern social class.

What these conversations make clear, however, is that even 20 years after it was first ousted from the runway, Burberry’s nova check cannot be read apart from its hierarchy and power – despite it being harder than ever to distinguish someone’s class by what they wear. Even the protagonists of The Only Way Is Essex and Made In Chelsea now dress the same. Where education, property ownership, and party allegiances were once clear-cut markers of social standing, fault lines now rest on increasingly fatuous things, like velvet sofas, food shops, and Ottolenghi, but even these are interchangeable. Today, the British class system feels less like a pyramid and more like a scribble, meaning someone can identify as working class and still have their parents pay their rent, while a middle class student might travel through higher education on maximum grants, struggling to make ends meet.

“When hierarchies can’t be maintained through things like position and economics, the symbolic idea of taste comes in to maintain control,” says Liza Betts, a researcher at the London College of Fashion, referencing the now-infamous paparazzi shot of Danniella Westbrook wearing a Burberry skirt and a Burberry bag, while lifting a child dressed in a Burberry kilt out of a Burberry buggy. Best known for her role on Eastenders and a public battle with cocaine addiction, the image was printed by The Sun alongside the caption “chavtastic”. “Danniella’s way of shopping Burberry and the way in which she put the look together was seen as the epitome of bad taste,” Betts explains. “But now, because taste has become such a fluid concept, it’s shifted into the high-fashion realm.” Like on FKA twigs, who wears head-to-toe check in her “Papi Bones” video, pushing a pram around the outskirts of a council estate; an environment somewhat at odds with her own upbringing as a bursary student at a private school in Cheltenham.

“No idea who that is but hilarious all the same,” Westbrook tells me over Instagram DMs. “As for the look, there was no big plan. I was already wearing that outfit to go shopping. I went into Burberry, bought the baby a skirt, matching tights, and then I saw the stroller so I decided to buy that too. I got papped getting into the car outside. That’s all really. No story. Sorry,” she types, followed by four cry-laughing emojis before saying she was feeling unwell and wouldn’t be able to continue with the conversation. An hour later, she uploaded a photo of herself wrapped in a chequered scarf to her stories, soundtracked by “Burberry Branded” by Michael Brooke. Despite her nonchalance, Westbrook’s supposedly vulgar (and now-iconic) subversion of the label’s heritage print reified the moral panic surrounding the ‘chav’ stereotype in 2002.

As Britain’s foremost fashion house, Burberry had been using the nova check since the 1920s, first lining its trench coats before spawning outwards onto cashmere scarves in the 60s and eventually proliferating the brand’s ready-to-wear collections in the 80s and 90s, beloved by Sloane Rangers and the Balmoral set. But as someone that sat outside of Burberry’s expected demographic, Westbrook’s all-over check took on rebellious, if not violent connotations, hailing back to the casual movement of the 1980s when football hooligans draped themselves in designer logos and bolshy monograms. In cultural terms, the ‘chav’ was a descendent of that abject archetype. And in more literal terms, Westbrook was a descendent of a shop assistant and carpet contractor, both of whom were successful property developers. If anything, Westbrook’s approach to dress keyed into the aspirations of the upwardly-mobile – or the ‘“nouveau riche’” – who knew just as much, if not more, about fashion than the established elite.

“Britain was very uneasy with itself in this period. What we used to call the old working class was suddenly left behind and culturally excluded as New Labour merged with the actual elite,” David Yelland, who was the editor of The Sun at the time, explains. “We used that picture because it was a great picture. It was immediately obvious to us that it was iconic. It went viral in an analogue world, which is quite something. But we understood the British character, the prejudices, and what their reaction would be.” Much like WAGs, reality TV stars and influencers, Westbrook provoked outrage for purchasing in a way that eroded class barriers, threatening both the moral order of society and the principles of luxury – “that which “symbolises tradition, craft and exclusivity as something to aspire to,” as Betts says.

Having already built his name at The New York Post, Yelland left The Sun a year after Westbrook’s outfit made headlines, moving to the Brunswick Group where he consulted on Burberry’s rebrand – something that was “a pure coincidence”. Looking back, he thinks “The Sun was far less classist than most papers and the whole ‘chav’ thing only played in the UK anyway, which only accounted for 7 per cent of Burberry’s global business.” And yet the brand’s association with teenage pram-pushers, so-called dole-scroungers, and petty criminals had been institutionalised by the tabloid press, before it became fodder for early internet phenomena like the Chavscum forum, “Moon Chavs”, and low-grade comedians. So much so that pubs and clubs began to ban the Burb and by 2005 the nova check appeared on less than 5 per cent of the brand’s product, while the company ceased production on its chequered caps altogether. “Angela Ahrendts and Christopher Bailey literally designed their way out of the problem,” Yelland says.

However, towards the mid to late 2010s, when fashion’s pendulum of desire began to swing towards streetwear, Burberry brought back its signature print in collaboration with Gosha Rubchinskiy, marrying the ‘chav’ with Russia’s ‘gopnik’. A year later, the nostalgic nova check served as the focal point of Bailey’s swansong collection, dovetailing with Demna’s ironic DHL merch at Vetements. Cut to west Londoners in their Wavey Garms, FKA twigs, and Riccardo Tisci’s Supreme-Burberry collab this year, and fashion almost looks as though it has been democratised, as if somehow in a class all of its own. Does this mean that we have now reached an era of post-appropriation? Or has fashion somehow reached a class of its own? “Some would say fashion’s embrace of sportswear is a form of resistance,” Betts says. “But most of the time that’s communicated via expensive labels. Sports Direct is read completely differently to Y-3. The middle class has always distanced itself from the working class and the idea of taste – be it holiday destinations, postcodes, or fashion – still manages and maintains that gap. How? Through brands like Supreme where the price points lift an item out of most people’s reach.”

Of course, working-class people can often spend just as much on clothes as their middle-class counterparts, with more financially established groups feeling they have less to prove. “With taste becoming an increasingly blurred concept, the symbolic struggle for distance has been heightened.” This dynamic mostly takes place within the middle of the class system, though, particularly between the lower middle and the higher working. “Otherwise, the two traditional extremes still exist, which is why there’s such a fuss about what Kate Middleton wears and why there are terrible programmes like Benefits Street.” As long as the gap between the top and the bottom continues to chasm, the appropriation of working-class aesthetics will always exist. So, “it depends entirely on context and perception. But these are all intangible things, which aren’t as cut-and-dried as when Marc Jacobs used dreadlocks, for instance. It’s about showing an understanding of fashion capital and consumption and the meaning and legacy behind it.”

At this point, however, it’s fairly clear when somebody is deliberately ‘cosplaying’ or ‘reverse slumming’. Whether that’s in a bid for authenticity or to distance themselves from the duplicitous elite, culture has provided us with the tropes (see ‘rah where’s my baccy’) that parody the kind of people who affect the mannerisms of the working class. In the UK, class prejudice often emerges through conversations surrounding clothing and the Burberry check remains a transgressive symbol because of this. As prolific as it may be, to wear the nova check today is to account for its troubled past, and for people like Danniella Westbrook. “It comes down to understanding and intent,” Betts concludes, “knowingly using the check to communicate your fashion capital, while reconnecting with it so that it acquires new meaning and importance.”

“As for real working-class resistance, well, it’s still misunderstood because the media’s understanding of fashion operates within a completely different value system and those who sit outside of that are always going to be judged. Working-class people are very aware of mainstream ideas of acceptability, they share the same knowledge about what happened with Burberry, but their ideas of fashion, of what looks good, and what’s appropriate to wear in different circumstances, are still ridiculed.” The mainstreaming of streetwear may have loosened some of these prejudices but the foundations of the class system remain solid. As much as fashion has reclaimed the nova check, its image will always be in precarious balance, creaking like a weathervane against the UK’s turbulent relationship with its own reflection.