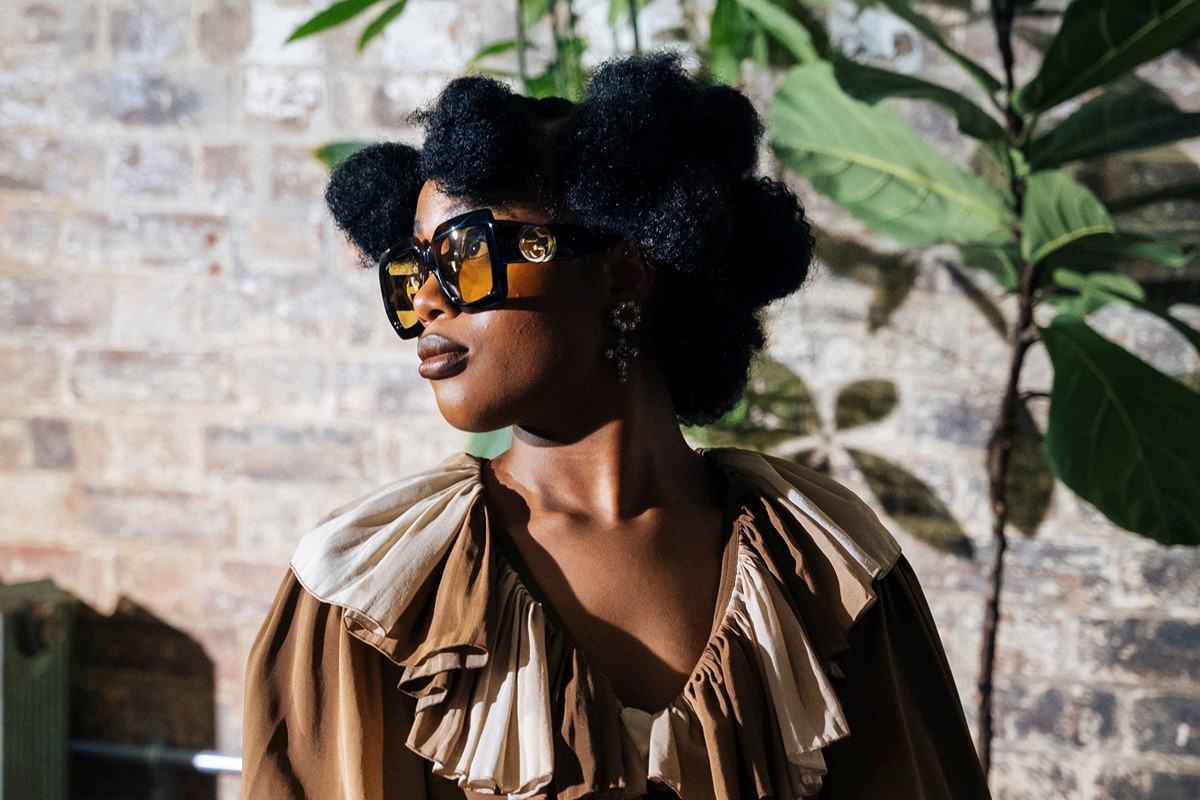 Fruit is a powerful symbol – the sumptuous first bite on a hot summer’s day, the sweet tang of a dessert shared with loved ones, its place in paintings, cinema, and art across centuries and ability to evoke sudden memories, hunger and wanting, sensuality.

Bukky Bakray, the BAFTA-winning actor known for her stellar debut in 2020’s hit film Rocks about London girlhood, takes this imagery and all its traditions, and imbues it with intimate meaning for her first time in the director’s seat. Bakray makes her directorial debut with Born Fruit, a film made in collaboration with Gucci, in which she also stars. She’s been inspired by the highly saturated visual language of Barry Jenkins’ Moonlight, Lynette Yiadom-Boakye’s intimate and gorgeous paintings of scenarios in her head, and Won Kar Wai’s delicate use of minimal dialogue. The themes dapple across family, identity, self-expression and personal connection, and imagined realities.

“My friends in the industry said I should play my ignorance to my advantage,” Bakray says. “I was acting and trying to be a director. I was having a relationship to crew like a DOP (director of photography, Kai Blamey) like I had never had before. It was a nice feeling, to be able to control shots. I’m so used to being in front of the camera and not having a say in the structure of a shot. I really used my curiosity, eagerness to learn.”

Bakray uses this directorial debut to explore themes and images she’s long mulled over. A young woman – played by Bakray – explores her familial history and sense of self through her relationship with her grandmother. Her grandmother’s Gucci handbag sits at the centre, a talisman to the otherworld. The woman sits among friends (dressed in sensuous Gucci garms), dining on papayas, dragon fruit, and blood oranges. They commune together, joyous. The hazy, dream-like sequences make us question whether the woman has imagined these friends, this commune, even her grandmother, whether for comfort or connection. The fruit – here, a blood orange – is a striking central motif in the film, symbolising abundance, nature, sweetness, and the significance of the gifts the world gives us. We see it bursting with seeds, a visual ode to growth and rebirth.

“Blood oranges are my favourite fruit – they show how things don’t always appear how they seem,” she says. “A blood orange, inside, is red. I feel like me as a person, I’m very misunderstood because of how I present myself. I know a lot of people in our time use fashion as a form of expression too. It’s that idea of presentation, imagined realities.”

As a debut, Bakray is keen to champion the cast and crew behind the project who made it a reality. Dan Farrelly, Daberechi Kalu, Samuel Onyefuna, Lauren C Mooney, and Modou Jagney make up the on-screen crew, while creative director Precious Graham is a long-time friend. The DIY, curious spirit is really palpable in how the film came together – several characters were street cast, for example.

“We found Dan on the road. I ran up to him and I think I said, ‘orange sweater!’ he was like. ‘I don’t wanna turn around!’ And now everyone, all of the boys of summer (as Bakray affectionately calls the boys ensemble) are really good friends now. It feels really nice to have grouped people together like that.”

“I wanted to make sure that everyone on set felt important, and that I still was keeping my creative integrity too,” she adds. “I spent hours on the treatment with Precious. We made sure there were no silly hierarchies, but Precious was the first person I called to be involved. We used a make-up artist, Mata Marielle, who we knew from our school days too. And the stylist Zadrian Smith is just incredible. Even the house that we used was our old friend’s mum’s house, who ironically rents out her house to places like Gogglebox.”

The initial narrative idea was sparked by an interest in West African and Caribbean culture, particularly the ‘Nine-Night’, a funeral tradition. “A Nine-Night happens when somebody passes away. Everyone will group together and just console each other, share food, and talk, sometimes sit in silence,” Bakray explains. “In light of the year that’s happened, I knew that I definitely wanted to do something about passing in some way. I got into the idea of the Nine-Night, and I wanted to explore the diaspora’s relationship with their family and traditions. I also had ideas of perception and seeing, and I was also inspired by the idea that you only see seven per cent of colour in what is around you. I wanted to play with what our eyes see and what our eyes don’t see.”

Bakray and Graham were also heavily influenced by French philosophy, specifically, the idea of “I think, therefore I am”. “Whatever you declare, that’s what you can present to yourself,” she elaborates. “In French philosophy they always talk about how the things that are in front of you, you know that to be true, because it’s been told. I know that my laptop is in front of me because somebody has told me it’s my laptop already. In the film, the woman has these friends that she sees, but may not be there. They are still a comfort, and they’re part a world she’s maybe created for herself.”

Emboldened by the work, Bakray hopes to continue writing and directing for the screen, with plans to develop the themes of Born Fruit. “I’ll be exploring the ideas and fleshing them out in a way more palpable for real life,” she says. “I want to keep writing about a woman who crosses over between her reality and the imagined.”