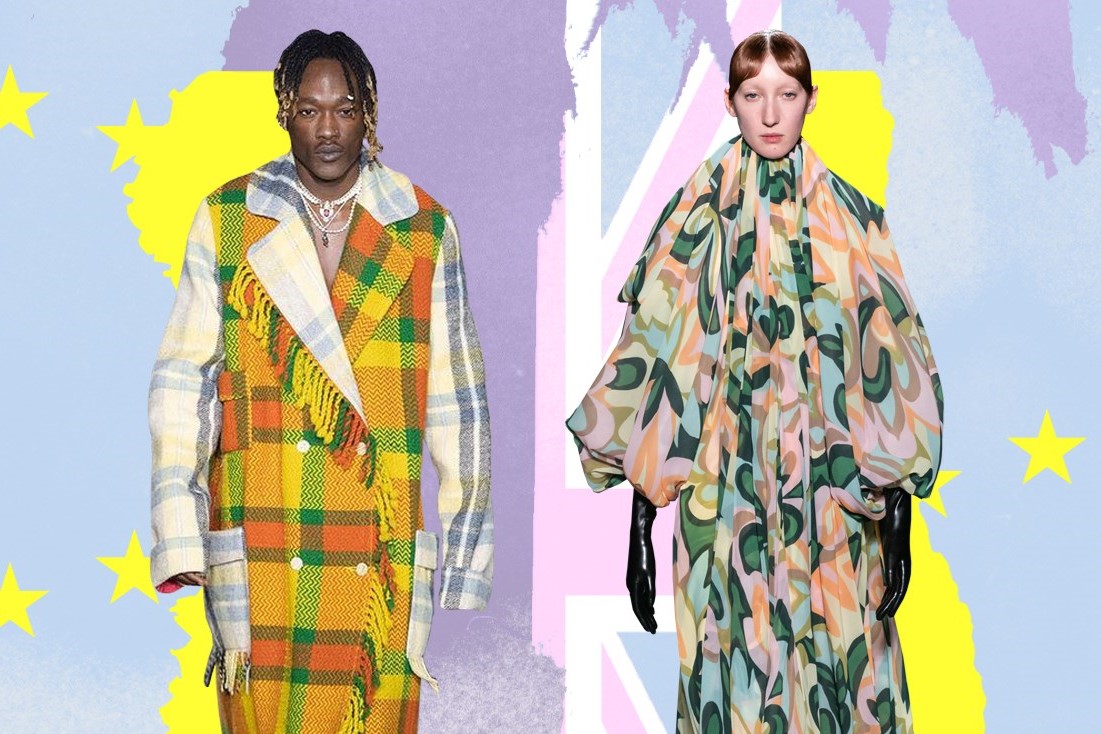 Ahead of the first post-Brexit London Fashion Week, designers and retailers including Richard Quinn, Bethany Williams, and Harry Fisher lay bare its effects on their labels

The fashion business is, notoriously, crash and burn. It’s one of the harsh realities of an industry which depends so heavily on novelty, passing over once-loved wunderkinds at the slightest whiff of the next-big-thing. While landmark brands like Burberry, Vivienne Westwood, and Alexander McQueen make up a robust skyline of UK fashion from afar, for most brands, achieving anywhere near this kind of longevity is a tall order. Today, the British fashion industry is on its knees. After two seasons of COVID disruptions, mass layoffs, and a sudden pivot to digital, the Brexit trade deal has delivered a sucker punch, which could knock many of the UK’s designers completely off balance.

“My inbox is like a therapy session” says Tamara Cincik, CEO of industry think-tank Fashion Roundtable, “it’s very, very bleak”. Although Brexit negotiators managed to secure a zero-tariff, zero-quota trade deal (a huge relief for fashion firms), other areas of the UK-EU agreement leave much to be desired. Namely, the “gaping hole where promised free movement for goods and services” should be, as an open letter to the government from Fashion Roundtable outlined. At £35 billion a year, the fashion industry is worth more to the UK economy than film, music, fishing, pharmaceutical and automobile industries combined. Yet this immense value has not been reflected in any kind of support from parliament. Meanwhile, the fishing industry has been given £23 million to compensate for losses caused by Brexit red tape. Bear in mind there are only 12,000 people that fish in the UK, which is about the same number of (soon to be redundant) Topshop employees. “Brands aren’t being heard” says Cincik and as we enter the first post-Brexit fashion week, “they’re worried they can’t keep going”.

For London’s designers, the impact of such a thin Brexit arrangement is worse than anticipated. Since January 1, brands have been lumped with unforeseen administrative duties, which now come with operating inside and outside of the EU. Excessive amounts of red tape covering complex VAT charges, new customs regulations, intellectual property applications, haulage handling, and penalty fees for getting any of it wrong. “It affects every single link in the chain” says Harry Fisher, director of Hoxton boutique htown, which stocks some of London’s most exciting brands – with Martine Rose, Saul Nash, and Ahluwalia among them. Brexit’s reams of red tape are not only “challenging for creatively minded people to understand” but “it hugely impacts the cashflow and time of these designers,” he says.

“It’s a lot to take on overnight”, says South London’s Richard Quinn, who is producing accessories out of Italy and Spain as part of his upcoming AW21 collection. “Packages have been held due to customs, and because the regulations are so new, it’s tricky to fully grasp who is responsible for what, and how to speed up the process. Timelines on shipments have been really sporadic making it increasingly difficult to plan ahead”. Haulage firms aren’t coping with the red tape either, meaning brands like Roksanda Ilinčić, who “pride (themselves) on working with artisanal companies throughout Europe” are now experiencing “unprecedented delays”. So while operational costs have multiplied, designers are also struggling to access their goods. And this doesn’t just endanger the final garment, but all the prototypes, fabric, trims, zips, and buttons that all come before. It’s a real stress, especially for the likes of Ilinčić, as one of the few designers scheduled to show on London Fashion Week’s official programme.

“The impact of such a thin Brexit arrangement is worse than anticipated. Since January 1, brands have been lumped with unforeseen administrative duties, which now come with operating inside and outside of the EU. Excessive amounts of red tape covering complex VAT charges, new customs regulations, intellectual property applications, haulage handling, and penalty fees for getting any of it wrong”

Bethany Williams, who works closely with social manufacturing projects in Italy describes the situation as “an absolute nightmare. Our main problem is adjusting to the new VAT scheme of each EU country”. Under current legislation, goods sold to the EU now arrive with added customs and VAT bills, which have to be absorbed by stores on a wholesale order or paid for by individual customers on their doorsteps. The rule differs from country to country, but the additional fees can be more than 20 per cent and it’s eating into the margins of London’s designers, who absorb the costs because they don’t want them to land on their customer. Bethany was meant to launch a web store this March, but she’s postponed the project having heard Brexit horror stories from her peers who have had to reimburse VAT bills and pay for their own returns. Many brands have even suggested it’s cheaper to burn returned clothes in the EU than deal with the red tape of getting them back across the channel. “Going direct to consumer is going to be a massive problem,” says Williams.

Although these are only the immediate impacts of Brexit, they have spun designers into prolonged jeopardy. Many of Williams’ European stockists are on “Ex Works” terms (meaning they pay for all the duties and transportation costs). “We’re worried that with an added 20 per cent from VAT that they won’t come back next season” she says. And that’s if they even arrive on time in the first place, given the extensive border delays. “Delivering on time is the most important thing for a brand,” says Fisher. “The earlier a store receives the product, the better the sell-through and the bigger the store’s budget will be for the next season as a result”. Brexit has made this all the more unlikely.

On top of this, there are long-term changes to UK policy that need to be addressed. There’s the decision to rescind the VAT Retail Export Scheme, which saw tourists able to buy fashion in the UK at a cheaper price than at home. We need European garment workers added to the Shortage Occupation List for visas, since the UK lacks the workforce to match demand. Then, we need to address freedom of movement and frictionless travel. Because “who knows what’s going to happen when we have to travel to Paris with our samples,” as Williams puts it.

While the pandemic has travel on lock, the longer term impacts of Brexit are predicted to be much worse than COVID. “We have the best designers in the world, and that’s not going to change,” says Harry – but as it stands, the UK is infertile to fashion talent and London is in danger of losing its reputation as a global fashion capital. In its place will be “more Boohoos, more exploitation” if we don’t get this right, Cincik fears, which is why Fashion Roundtable has “sent 69 letters to the government in the last year”. The initiative is working round the clock to deliver briefings and insights to parliamentarians, lobbying the government to deal with red tape issues, and advocating solutions. “But without me doing it no one would. Because no one has been checking what’s going on,” she adds. “Many people aren’t hearing from bigger organisations within the fashion industry, so they are coming to us. The industry needs to understand that to be effective, you have to engage with politics.”

It’s ironic, given just how political fashion can be, that there is such a dissonance between the two worlds. “When the media and politicians think of fashion, they only see crazily-dressed people, never the jobs or value, but the fashion industry has never really trumpeted itself other than allowing itself to be talked about during fashion week.” Even anecdotally, a very large number of designers and PRs refused to provide comment on this article, preferring to steer away from politics and matters of business entirely. “There is still nowhere for designers to get information on what to do. Even a simple Brexit webinar would be so useful,” Fisher adds. “In this industry, people are too scared to say things. It’s a culture that is holding our sector back”.

“There is still nowhere for designers to get information on what to do. Even a simple Brexit webinar would be so useful. In this industry, people are too scared to say things. It’s a culture that is holding our sector back” – Harry Fisher, htown

However, “in dark times there’s so much power in creativity. It’s really important for us to show light and hope,” says Williams, noting that not even Brexit could dull the spark of London’s hotbed of talent. It’s a heartfelt sentiment but Cincik puts it into perspective: “Where are these brands going to be in 10 years if we don’t get the right support?” “It’s important that the government take a serious look at the bigger picture and really understand how Brexit is affecting fashion houses here in the UK,” says Quinn. He’s right, but fashion needs to hold policy makers to account. Policy is business, livelihoods, and creativity. We cannot expect parliamentarians to understand a sector they have very little engagement with. The fishing industry punched above its weight with its lobbying of the government. Other creative sectors have been efficient in organising through their unions. Theatre has Equity, film has Bectu, music has The Musicians Union. Where is fashion’s equivalent? Brexit is hacking holes in fashion’s very infrastructure.

When Ilinčić first came to London in 1999 from Serbia, she found “an incredible, prospering industry where everything was in place to support someone like (her) to build a brand from scratch, employ people, and give back to society”. For the up and coming designers of today, 2021 looks decidedly different. The cracks of Brexit are beginning to chasm and they go much deeper than we had expected. At its core, fashion is relentlessly optimistic, a constant reimagining of the future, even in the bleakest of presents. But, as Cincik puts it quite plainly, if the industry and its organisations do not engage with policy, “there will be no future at all.”

Write to your local MP urging them to save the fashion industry by using the template found here, and revisit some of the most iconic LFW shows that demonstrate just how vital it is we continue fighting in the gallery below.