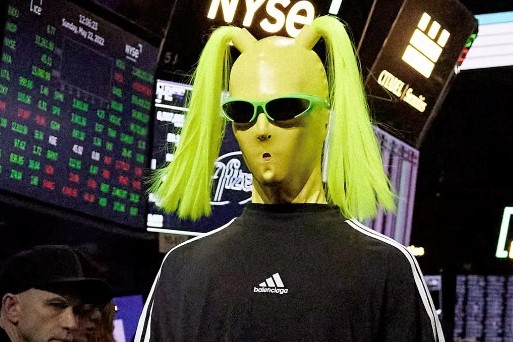 From Leigh Bowery, to Vivienne Westwood, and Balenciaga, the runways have proved the gimp is so much more than just a hole, sir

Body bound and barely breathing, pop culture has long positioned the gimp as the stuff of nightmares, holed up in the attic of some sexually-transgressive serial killer. But even before the word ‘gimp’ was first coined in Pulp Fiction, anonymous sex-slaves were being appropriated on the runways for their shock-image factor, marched out in black leather, buckles, zips, and full-body latex by the likes of Jean Paul Gaultier, Walter Van Beirendonck, Gareth Pugh, and Riccardo Tisci, to name but a few. While artists like Catherine Opie and Robert Mapplethorpe went some way to humanise the gimp, its associations with suffering, torture, deprivation, and debasement have proved to have an enduring potency.

Nobody loves the gimp more, though, than red top journalists, whose guttural reactions are projected onto headlines like “BIZARRE fashion show sees models dressed like BANK ROBBERS with GIMP-LIKE masks” or “It’s kinky Kim Kardashian! Reality star SHOCKS in fetish mask with ZIPS”. But, as perhaps the ultimate outsider subculture, the symbolism inherent to the gimp is always ripe for subversion. For example, Balenciaga’s “capitalist meltdown” show unleashed a phalanx of oriﬁce-less city-slickers, eroticising the seedy dealings and facelessness of Wall Street. Yes, the gimp is typically at the mercy of a whip-weiding master, but as models squeaked through the New York Stock Exchange in skin-tight rubber suits, it felt like an act of power more than of degradation, humiliating the financial elite.

Plundering the kind of extreme imagery found in vintage S&M magazines, Hollywood may have popularised the gimp as the embodiment of horror, but designers have managed to imbue the wipe-clean sub with identity and a sense of personhood. From Leigh Bowery, to Vivienne Westwood, to Moschino, below, we map some of the most memorable moments that the gimp has turned a slave to fashon.