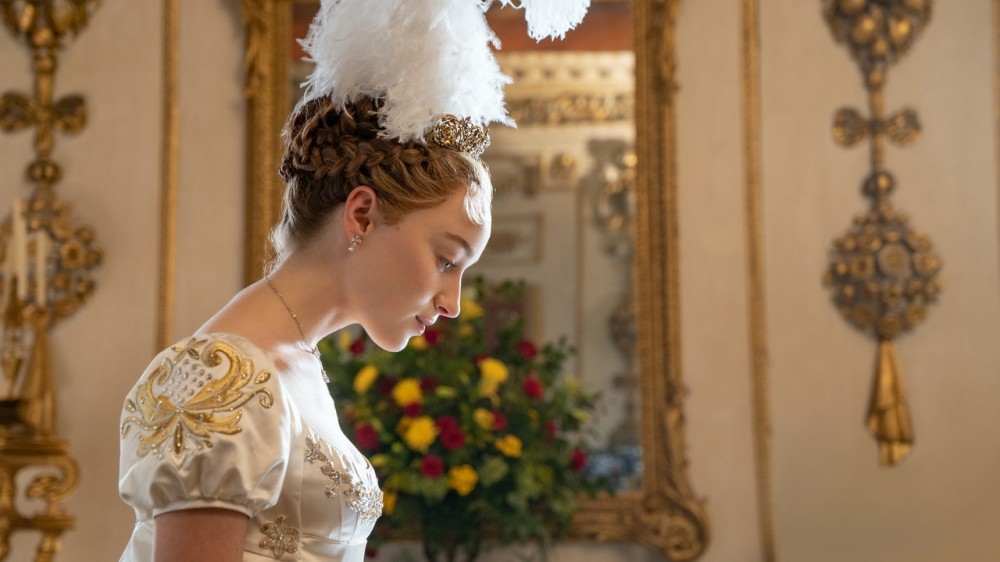 In month 11 of living through a pandemic, we’re happy just to get out of sweatpants. Jeans feel like a small victory these days. So it would seem entirely unlikely that Bridgerton, Netflix’s new Regency-era historical drama, could offer much in the way of style inspiration. Set in 1813 London at the start of “the season,” in which young debutantes “come out” and vie for the attention of eligible bachelors, the show’s finery is almost campy in its sweetness. Costume designer Ellen Mirojnick created a whopping 7,500 looks for the eight-episode run, with “ice-cream pastels, acid-bright florals, acres of ruffles, rhinestone-encrusted puff sleeves, and wigs that could rival Marie Antoinette’s.”

Fantastical? Absolutely. Relatable? Not so much. And yet Bridgerton fashion is trending: Lyst reported that since its premiere, online searches for corsets—a requisite garment in the show—have surged 123%. Pearl and feather headbands have seen a 49% bump, and empire-waist dresses, the defining silhouette of the era, have risen 93% in popularity. Influencer marketing platform RewardStyle has seen similar data through its LikeToKnow.it tool, which tracks users’ searches and purchases. Embroidered dresses were up 1,000% on LTK, with silk dresses further ahead by 3,900%. The nap dress, first popularized by Hill House Home, has spiked 25,000%, likely inspired by Daphne Bridgerton’s floaty cotton nightgowns.

Is the explanation as simple as “escapism”? We’ve spent almost a year in leggings and hoodies; at this point, a pretty dress feels transportive. An impractical accessory, be it a feathered hair clip or opera-length gloves, is practically an act of resistance. Amber Venz Box, the co-founder and president of RewardStyle and LikeToKnow.it, put it this way: “I believe it’s a bit of a ‘new year, same situation’ [feeling], and people are craving the instant gratification that comes from impulse purchases. Buying things for when we can go out again gives people a sense of hope and something to look forward to. In a way, these shows are giving us a means of living vicariously in the absence of ‘real life.’” (I’d argue it helps that Bridgerton-ish dresses are relatively simple and flow away from the body; an empire-line dress would be a relief compared to the nipped waists and high-rise denim of pre-2020 fashion.)

As for trying the look yourself, you may not find exact replicas of Daphne’s wardrobe; each look was custom-made for the show. But fashion observers will recall dozens of similar options on the runways: Loewe, Erdem, Simone Rocha, Brock Collection, and Rodarte are just a few labels that’ve put their spin on empire-waist dresses, puff sleeves, bows, and brocades. Some designers have borrowed from men’s Regency style too, like Karl Lagerfeld, who paired snug jackets and ruffly high collars in his Chanel fall 2009 collection, and Dries Van Noten, whose spring 2020 collaboration with Christian Lacroix included an irreverent riding jacket and feathered headpiece. Perhaps the most iconic example of all is John Galliano’s spring 2005 Dior couture, made all the more memorable by Gisele Bündchen. Just weeks after the show, she wore an embellished ivory empire gown from the runway for the 2005 Academy Awards with her then-boyfriend Leonardo DiCaprio, and it’s still one of our favorite red carpet looks.

Here, revisit 15 runway looks that nod to Bridgerton as you plot your own “coming out” post-lockdown—hopefully as soon as this summer.