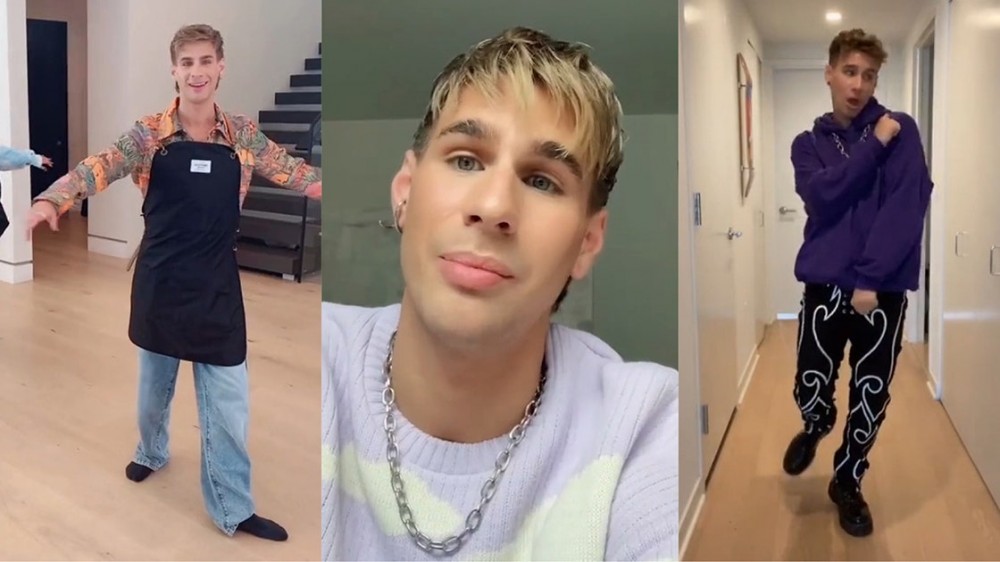 If you’re on TikTok, you’ve likely come across Brad Mondo reacting to an at-home dye job or hair cut: His animated facial expressions, whether he’s appalled, thrilled, or perplexed, are as entertaining as the DIY videos he responds to. Armed with over 7 million followers, Mondo joined the app last year and has since become TikTok’s favorite hair stylist. (He first gained a big following on YouTube, where he has over 6 million subscribers.)

Many creators tag Mondo in their videos, in the hopes of him duet-ing their posts. (“Sorry, Brad Mondo,” they’ll say as they document their unprofessional, at-home attempts). Sometimes he’s horrified at the end results, other times he’s thoroughly impressed. But something that’s just as impressive as Mondo’s knowledge of hair? His sense of style, which is worth a follow alone.

The 26-year-old hair stylist—who is the CEO of his own hair care line, XMONDO Hair, and based in New York City—has the kind of fashion sense that grabs attention on TikTok. His wardrobe is full of graphic, colorful pieces that suit the app’s e-boy sensibility. “I love the punk aesthetic,” Mondo tells Vogue. “Color is also something I’m getting more and more into. The brighter the better.”

Whether he’s doing Charli D’Amelio’s hair in a groovy, disco-style top or reacting to a video while wearing a casual mesh sweater with a tank top underneath, he’s not afraid to switch up his look. “I like becoming an entirely new person every couple of months,” he says. His outfits are heavy on designer labels such as Prada, Eckhaus Latta, Loewe, and more, often sourced from cool vintage shops such as James Veloria in Manhattan, too. “I find really great unique pieces there,” Mondo says.

Below, Mondo talks about getting into hair, what his current wardrobe looks like, and how he enjoys matching with his brother.

How did you get into doing hair?

My dad is a hairstylist and owned a salon, so being a creative kid in that environment, I naturally took a liking to it. Watching stylists transform their clients and give them new color, cut, and outlook on life, I became obsessed with the world of hair. The way you can sit someone down in a chair, learn about them, and give them a cut and color that brings out who they are on the inside, was magical to me, and still is. Becoming a hairstylist allowed me to be creative, as well as help people be the truest version of themselves.

Social media has been my job for years now, and if there's one thing I’ve learned, it’s that you must adapt to the constant changes or you’ll fade away. When TikTok started, I knew it could possibly blow up. I thought it’d be a great way to diversify my following and have some fun creating a different style of content on a new platform. I also loved the content and the creators on TikTok, so I wanted part of the fun. My TikToks evolved from posting random funny videos of myself to posting more videos focused on just hair. At first, I didn’t know you could be so niche on TikTok, then I realized that people wanted the same thing on TikTok from me that they get on YouTube, just shortened.

What's your process for creating TikToks? Where do you get ideas?

I keep a list of TikTok ideas on my phone. I have hundreds of ideas. They can come from so many different places, fan requests, scrolling through TikTok, but mostly from just my own boredom. Most of the ideas will be trashed though. I usually look through the list, then pick one for that day and create it. It’s a pretty simple process, to be honest. I try not to overthink it. From my experience, people on TikTok want to see raw, relatable content that isn’t too produced.

I'm sure you've seen people tagging you in videos saying, "Sorry, Brad Mondo." How does it feel to be TikTok’s favorite hair guy?

It's very flattering. I think the whole “I’m sorry, Brad Mondo” trend is hilarious. I hope nobody ruins their hair on purpose for me, though. That would make me very sad. I have the coolest job. I love being able to connect with people from around the world. Meeting fans in person is one of the best parts about my job, so I hope to do more of that when it’s safe.

Let’s talk about your style. What are you into fashion-wise at the moment?

I’m going through a chunky boot phase right now. Every chunky black boot I see, I snatch up. I’m super into the bell bottoms that I’ve seen so many guys rocking lately, looking to purchase a pair of my own. Designers I’ve been loving lately are Eckhaus Latta, Theo Philio, Ricky King, Angel Chen, Loewe, and Prada.

What's the most special piece in your wardrobe?

The most special piece in my wardrobe right now are my Saint Laurent burgundy velvet pants. They fit like a glove and they make my butt look so perky. They’re also just so unique and beautifully crafted.

The first pair you mentioned comes from an amazing designer named Ricky King who hand-paints his garments. Those pants also have a matching blazer, I have a photo on my Instagram. I’m obsessed with the look! [The second] pants were definitely a look. They’re from Jaded London. At this time in my life, I was just searching for the next loudest garment I could find. Something that would scream hey, I’m here! I think I achieved that with these.

You often do videos with your brother, Eric; how does your style differentiate? How is it the same?

Eric's style is forever changing. When he first moved to New York, he could not have had more of a different style from me. He was working in corporate America before he came to work with me, so you can imagine what his style was like. He’s now fallen into his own thing where he likes to look a little punky with the earrings and the colored hair that he usually rocks, but he also likes to tone it down with neutral colors and a more business-casual attire. I’m very loud all the time and he's a bit more subdued. But our style overlaps on the weekends. I dress him up in my craziest looks and he rocks them.

You switch up your hair regularly. Do you change your fashion just as often?

For sure! Even right now, I’m itching for a change. I may go platinum again… Every season brings out a new Brad. I look through my old videos sometimes, even ones from a couple months ago, and I can’t believe that’s the same person as I am today. I love transforming myself constantly because it gives me that ‘new’ feeling that I’m very much addicted to.