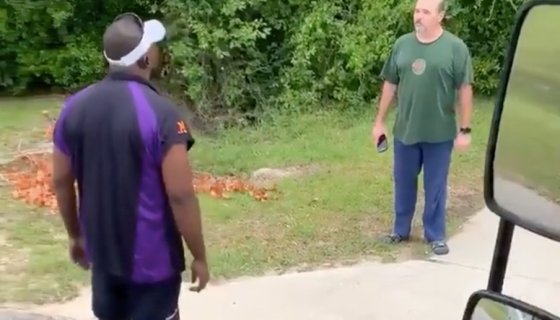 A pair of Black men who were working on behalf of FedEx in filmed an argument between them and a white customer that racially profiled them while they were simply doing their jobs. According to FedEx, the men were not fired by the company and are actually independent contractors, while an activist group started a GoFundMe on behalf of the men.

Antonio Blackwell shared a video Twitter of the exchange between him and the customer after he and another man dropped off packages to a customer’s residence in Leesburg, Ga. According to the GoFundMe page, Blackwell and his coworker were threatened by the customer, who began filming them on camera prompting them to do the same in return.

From the GoFundMe page started by GAFollowers:

All we did was deliver his package, he was in the house at the time. It was a quick stop and as soon as we were leaving he ran out his house cursing and threatening us. While we were looking confused we just apologized for being on his yard but he keep going on then kept saying he would whoop our black asses and then he told his wife to call the cops. That’s when he pulled out his phone playing victim and that’s when I recorded. Idk what the police did but I posted this video because we go through racism everyday on that route in Leesburg but he was the first one to actually come up and actually threaten us.

Adding a new wrinkle to this story, FedEx issued a statement Twitter regarding the incident and said that the workers were actually hired by a third party working on behalf of the delivery service.

“We are aware of the incident in GA that led to the release of two drivers employed by a service provider. We’re offering employment while investigating to ensure an appropriate outcome. We take seriously allegations of discrimination, retaliation, or improper employment actions,” FedEx said in the tweet.

As the #BoycottFedEx trend grows and the GoFundMe moving at a rapid clip, folks on Twitter are asking FedEx pointed questions as to why they haven’t addressed the service provider that hired the men or taking a bolder stance on behalf of workers risking their health to get packages to people during the COVID-19 pandemic.

GAFollowers says it will split the money raised between Blackwell and the other gentleman Felinzay, whose last name hasn’t been shared.

Update FedEx called and told me to take down this video and fired both of us Today .. I’m reposting this video because people like him doesn’t matter white or any race should never disrespect essential workers putting their lives in jeopardy especially with this covid-19 pic.twitter.com/Fw0S5gNRso

3. The men record video of the incident and post it

5. This could have been another Ahmaud Arbery#BoycottFedEx

When a Fedex truck pulls up to your house, and a person in a Fedex uniform is approaching your door, guess what they're doing…DELIVERING A FUCKING PACKAGE! This driver did nothing wrong. #BoycottFedEx https://t.co/5bSnDIiEbP

Fire the people who fired them and we can talk.

I hope they sue this company for wrongful termination.

The fact that the initial response was to fire the drivers WITHOUT a careful look at the details speaks volumes about your culture. Can’t put the toothpaste back in the tube.

It's a shame that it took a video going viral for you to do.the right thing. Delivering a package should not make your employee feel unsafe or demeaned and when it happened, you didn't have their back. Very disappointed in that.

You all shouldn’t have fired them in the first place, but instead you chose to enable people like King Karen!

The people who decided to fire them need to be fired. And the workers in this video need to be given raises.

a fedex driver was threatened and harassed in what’s very clearly a racist confrontation. fedex responded by firing the driver and the trainee who was with him. despicable move on the part of @fedex who clearly have no respect for their workers and do not adequately protect them https://t.co/VcnmhzEnYe

Me when the spokesperson at FedEx tries to come with some bullshit excuse #BoycottFedEx pic.twitter.com/53G8c14ACm

I wonder how much FedEx paid Twitter to make #BoycottFedEx disappear from the trending topics? pic.twitter.com/oX52lxM3UV

Every day black people go out into the world.

They’re attacked & persecuted for the color of their skin.

So tired of white people saying “oh, they always have to bring race into it.”

You won’t let us forget.