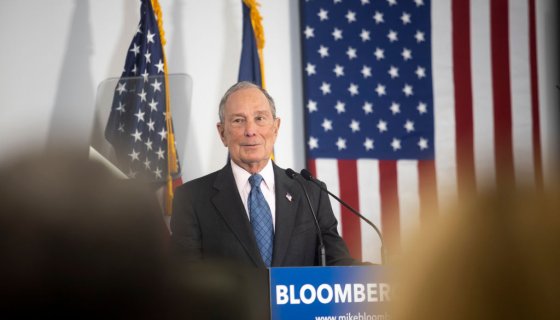 Former New York City mayor is fighting to improve his standing on the Democratic Party stage as a presidential hopeful, but a new hashtag on Twitter unveils potentially damaging viewpoints. On Twitter, #BloombergIsRacist has been trending with users alleging that Bloomberg supported policies that oppressed others.

Political podcaster Benjamin Dixon unearthed a 2015 speech Bloomberg made at the Aspen Institute in where he defended New York’s , which unfairly targeted residents of color.

“Ninety-five percent of your murders, murderers and murder victims, fit one M.O. You can just take the description, Xerox it and pass it out to all the cops,” Bloomberg is heard saying.

He continued with, “You want to spend the money to put a lot of cops on the street. Put those cops where the crime is, which means in minority neighborhoods.”

Bloomberg also said in his speech that one of the ways to keep guns out of the hands of minorities is to, “throw them up against the walls and frisk them” as a means to deter anyone from doing so.

Dixon wrote Twitter that Bloomberg suppressed the release of video from the Aspen Institute speech and it isn’t known how Dixon obtained it. However, the clip itself paints a picture that Bloomberg endorsed the rough treatment of minorities in the city despite the data showing how ineffective and racist the policy was.

In the midst of spending large amounts of money in his presidential campaign, it will be interesting to see Bloomberg’s reaction to the clip going viral on Twitter. Observers online have chimed in under the #BloombergIsRacist hashtag, and we’ve got those below along with Dixon’s initial tweet.

Audio of @MikeBloomberg’s 2015 @AspenInstitute speech where he explains that “you can just Xerox (copy)” the description of male, minorities 16-25 and hand to cops.

Bloomberg had video of speech blocked.

Perhaps because of the problematic explanation he gives for #StopAndFrisk pic.twitter.com/Fm0YCi4ZRy

No wonder Bloomberg tried to keep this speech quiet (1/2) pic.twitter.com/X319gyquBc

Political dynamite. The cold, calculated condescension in his voice is disturbing. Was he really referring to human beings, didn’t sound like it. “Throw them up against the wall and frisk them “ awful.

reminder that Michael Bloomberg refused to settle the central park 5’s civil rights lawsuit once they were exonerated and spent millions fighting their case and siding with the police and prosecution. it was only settled after he left office as mayor #BloombergIsRacist https://t.co/3taXjLrPdc

Trump tweeted the video out and then deleted it. I’m guessing he read the thread where we ripped him to shreds for his own racism. #BloombergIsRacist and #TrumpIsRacist

From time to time I remind folks that Bloomberg is a fascist, with the same exact ideology as Donald Trump. People think this is hyperbole. It is not.

At this point, I think it’s beyond reasonable to respectfully call on all of the people who endorsed @MikeBloomberg to retract those endorsements. #BloombergIsRacist #BloombergIsaRepublican #BloombergIsARacist

#BloombergIsRacist he gave 12 million dollars to Republicans in 2018. He endorsed Bush and the Iraq war. He's lying about Obama endorsing him. He wants to fingerprint Black people for food stamps.

.@MikeBloomberg is not just racist in the abstract. Stop-and-frisk had a devastating impact on lives & communities. People lived in constant fear. New Yorkers saw it up close & will never forget. An apology is not enough. #BloombergIsRacist #BloombergIsRacist https://t.co/9wpxWg6GkY

If you need the #BloombergIsRacist hashtag to know Michael Bloomberg is a racist you haven't been paying attention. https://t.co/awgTScdhnq