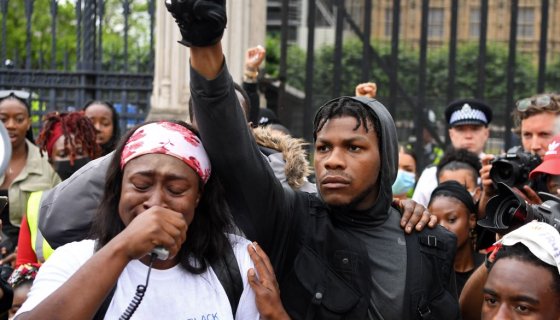 showed the passion he has for his people after slamming white racists attempting to correct him after he spoke up on behalf of George Floyd. Putting his money where his mouth is, the British actor took to the streets of London and made an impassioned plea on behalf of Black Americans suffering racial injustice at the hands of police.

Boyega, known for his role as Finn from the Star Wars movie series, was moved to anger by the murder of George Floyd in Minneapolis, using his large platform to show his support for the Houston man’s family. Boyega’s followers tried reasoning with him and suggesting that he think of his acting career, but he expertly handled those suggestions after an Instagram Live session that clearly depicted his feelings.

Continuing that plea for justice on behalf of Floyd, Breonna Taylor, Sandra Bland, Ahmaud Arbery, and too many others to name, Boyega joined a large gathering on Wednesday in London’s Hyde Park where a Black Lives Matter rally took place. Taking a megaphone in hand, Boyega, voice dripping with emotion, put it all on the line.

“Look, I don’t know if I’m going to have a career after this, but f*ck that,” Boyega began.

Boyega was met with loud cheers as he concluded his speech and immediately, some in social media threw their support behind him and explicitly stating that they would hold space for Boyega to work creatively with them.

Salute to John Boyega. Check out those reactions from Twitter below.

I would work with John Boyega and I urge other Non-Black creators to affirm that they have his back as well. https://t.co/SqXgmIS5aR

I would crawl through a barrel of broken glass to have John Boyega even so much as *glance* at one of my scripts. https://t.co/0bcLeldaEg

'Attack the Block' is trending and if you somehow haven't seen it, do seek it out. Dark sci-fi with John Boyega in a powerhouse leading role from a poor, black, British perspective, one that forces you to reassess your initial assumptions as to who the heroes are. pic.twitter.com/u8OSaYMt2V

Keke Palmer and John boyega better not lose no brand deals, movie roles, or any kind of connection to the industry after this shit either

I'm trying to get all the way behind this John Boyega thing, but just a reminder that black women have been out here jeopardizing their careers for years. I know some of them. I feel like that's being lost and I just think it's important to know. 0 shade to what he's doing.

Dear @JohnBoyega, I see you and I love you. Thank you for loving us. #King 👑

And know this, being on the right side of history is better than any paycheck complicit silence would provide.

Now if only there was a movie franchise he could star in where he could play this type of role as a character on screen… pic.twitter.com/OlIuSzWrBg

If the film industry even TRY and cancel John boyega, we boycott.

I would love to work w John Boyega https://t.co/zQTIP29SVR

John Boyega is a hero to my son and so many other kids and young people. It’s role models like him that are needed just now pic.twitter.com/eM605ovK0F

Disney: we want you to be a Rebel, John Boyega

Replace Chris Pr*tt with John Boyega in every upcoming movie

Happy to announce I will cast John Boyega as soon as he returns my emails https://t.co/dwHk8MkIt2

I would absolutely cast John Boyega if I'm ever in a position to. I should be so lucky he'd actually accept. https://t.co/ufsUJSH3tO

nothing but respect for john boyega. not only did he speak loud and clear about this on his platform, he went out and did something too. his career could be on the line but what does that matter if he might not even have a life to live to keep pursuing that career? keep fighting. pic.twitter.com/qN740XOyoV

Absolutely. I would be honored to work with @JohnBoyega and can only hope to have the chance. We’ve got your back, John. Don’t hold back. https://t.co/4d5gA3RRkj