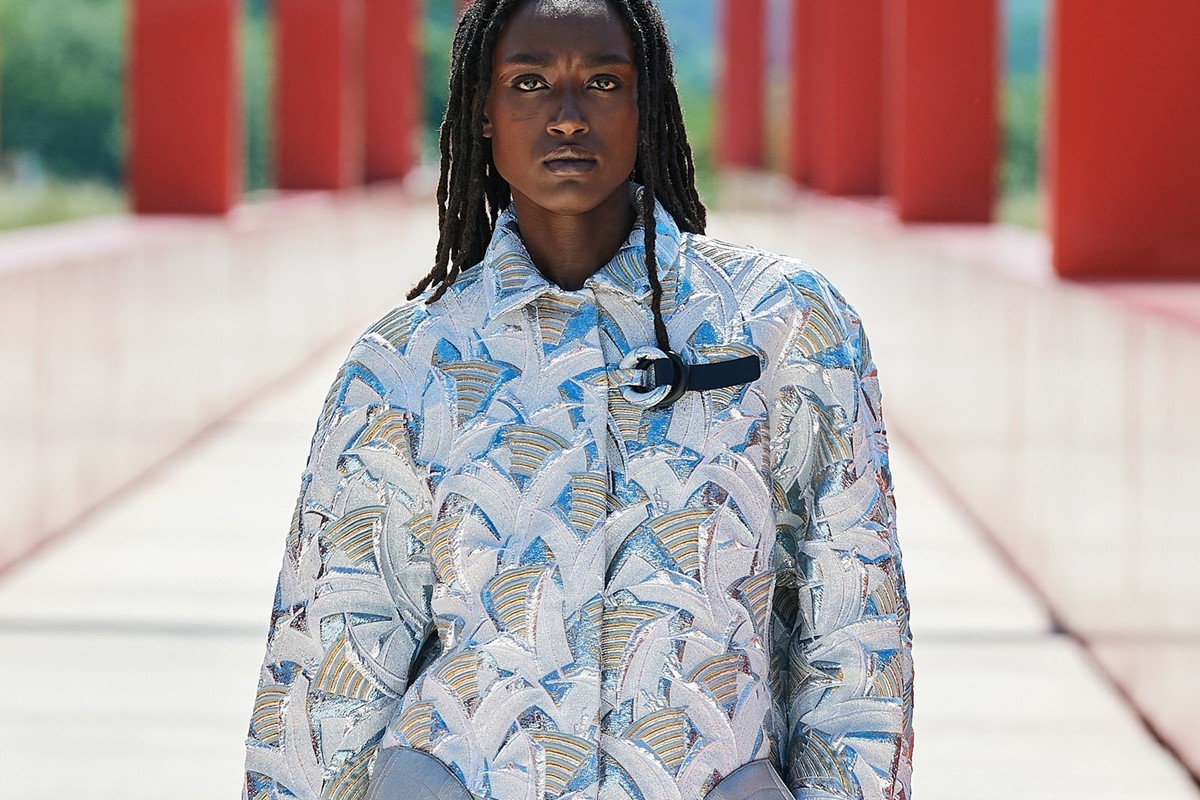 Ladies, gentlemen, and those who don’t subscribe to gender – Nicolas Ghesquière is floating in space

With the only viable option for a green-lit holiday slipping miserably down onto the UK’s amber list last week, right now, a long weekend in whatever dregs are left on Airbnb is looking like the only option for this, the Hot Vaxxed Summer of 2021 – but that doesn’t mean we can’t still dream of something a little bit more exciting. Doing just that at his latest Louis Vuitton Cruise show was Nicolas Ghesquière, who looked beyond exotic beaches and instead imagined blasting himself off into outer space come the new season (side note: big mood).

Taking place at Paris’s Axe Majeur – a landmark feat of futurism designed by Dani Karavan – the designer sent a series of looks that spoke of the 60s space race out onto the runway, which this season took the form of an expansive mirror that made models appear as if floating above the clouds. Riffing on some of the designer’s greatest hits and his overarching affinity for retrofuturism, swinging shift dresses with bulbous hems, panelled Star Trek-y tailored jackets, and knitted tube tops layered under heavily embellished vinyl pinafores – which seemingly drew on the work of fellow futurist André Courrèges – were the order of the day.

Elsewhere, glittering evening dresses were paired with mod-ish, pointy boots bearing the house’s monogram, jackets embellished with plumes of feathers were matched with coquettish kitten heels, and swingy blouses – great for maneouvering at zero gravity – with caped backs were tucked into louche, high-waisted trousers. The designer also debuted a series of articulated leather pants that playfully referenced past hits, including his Balenciaga SS07 ‘robot leggings’ – which, ICYMI, were recently mined by Demna Gvasalia himself and turned into the knightcore-esque thigh-highs that proved a standout of his AW21 collection.

Plenty of LV’s looks paid tribute to the 80s and early 90s – as Ghesquière so frequently does – through their kitschy, spray-painted collages of lunar landscapes. Dotted across hems and down the sides of skirts, each otherworldly atmosphere was punctuated by a series of distinctly earthly, domestic scenes, including diners, neon-lit motels, and running tracks. It was as if the designer had landed on the moon and settled in a space colony, sending the kind of brilliantly trashy postcards usually acquired at beachside shops back to his friends on earth. Again, these motifs suggested Ghesquière had been feeling nostalgic during lockdown, the graphics offering up hints of his AW13 offering for Balenciaga, which also implored wearers to ‘join a weird trip’.

With space tourism becoming an ever more tangible concept – at least for the super rich among us, given just last week Jeff Bezos announced he was going to be blasted into orbit to the tune of an extremely casual $28million – the collection offered up a joyful take on an intergalactic uniform and a touch of escapism at a time when plenty of us are still relegated to the towns, cities, and villages in which we live. We might not be going anywhere right now, but trust Ghesquière to take us on a journey through the fashion cosmos.

Check out the collection in the gallery above.