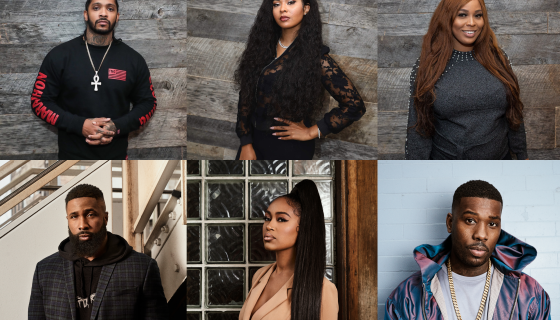 Black Ink Crew: Chicago is back, and before COVID-19 hit the city, the drama did first.

The season premiere opens up with 2nd City Ink looking for new artists and employees. Last season Charmaine’s shop lost a few faces, including Draya, who is now at Ryan’s shop much to the dismay of Charmaine and the shop’s co-owner Jess who ran back home across the pond following a fallout with Charmaine.

Just in case y'all forgot here's who is IN and OUT of 2nd City Ink!#BlackInkCHI pic.twitter.com/pJjlQAuvv7

Anyway, Miss Kitty is running the interview process of all the potential new talent who walked in the shop, hoping to land a job 2nd City Ink. During her home confessional, Kitty reveals that she and Ryan are in a “weird place” following his “family vacation” with his ex Rachel and the kids. Kitty explains that people have been getting at her on social media as a direct result of Ryan’s actions.

Kitty CLAIMS that she is going to let the betrayal from Ryan go… but do we REALLY think she's over it? #BlackInkCHI pic.twitter.com/dDFmhWhn10

Speaking of Ryan, we head over to 9 MAG, and we quickly learn that despite not wanting to bring Bella back last season, Ryan had a change of heart and re-hired her.

Some faces I NEVER thought I'd see back at 9Mag! 😮

Draya has also got quickly acclimated to her new place of employment as well. Ryan knows this will forever be an issue with Charmaine, but he’s just happy to have more of a female presence in the shop and states that both he and Charmaine are in a good place regardless of his decision to hire Draya.

Sadly, Don and his wife Ashley were not able to work things out from last season, and he is no longer living with her and the kids. Now shacking up with his brother Phor, Don is currently on a spiritual journey, and it’s already annoying Phor.

Kitty finally has time and pulls up to 9 MAG to have that much-needed conversation with Ryan. She felt she had to confront him because he failed to defend her from the backlash she was receiving on social media. Once inside, Kitty tells Ryan that he has her out here looking crazy after the footage of him and Rachel on vacation surfaced. Ryan snaps back and says to Kitty that his family comes first before anything and that he never told Kitty they were in a “relationship.” VH1, of course, played back the footage of Ryan telling Kitty they were, in fact, dealing with each other.  Ryan informs Kitty that she can’t tell him what to do, and she storms off.

Was Kitty reading too far into the "situationship" or was Ryan giving MIXED SIGNALS? #BlackInkCHI pic.twitter.com/0plqm1lUj2

Why they keep trying Kitty? SMH

Moving on, Van looks like he will have a more significant role this season. We quickly learn that he and Jenn are dealing with each other again and his daughter, Bri’s 18th birthday is coming up. Of course, she wants to have a big party to celebrate the once in a lifetime occasion, and Van is down with the idea. She also wants to invite Charmaine, Ryan, Phor, and Don because she knew them since she was 12.

Van knows this is going to be difficult but tells his seed that she can invite anyone she wants, being that it’s her birthday.

Should Van bury the hatchet with his former friends for the sake of his daughter? #BlackInkCHI pic.twitter.com/pHA0eYgHZU

The episode gets a bit serious when former NBA baller and his son Noah who is Ryan’s nephew, stop by the shop. Noah is the sole survivor of the double murder that took the lives of Ryan’s sister Nova and his niece, Ava. Ryan talks to Eddy about the Curry penned for the Player’s Tribune detailing the off-and-on relationship he had with Ryan’s sister as well as her tragic death at the hands of her attorney, Frederick Goings.

Curry at the time of Nova and Ava’s death was married to his current wife, and the essay drew negative attention to his deceased sister, with many labeling her a mistress and saying she got what she deserved. Eddy, sadly, never got to see his daughter until she was in the casket. Ryan and others who personally knew Nova came to her defense. In the powerful scene, Ryan says he has no issues with Eddy despite all the drama that followed Eddy’s essay.

Once the conversation was over, Eddy gets a tattoo of Ava’s name on his hand as a tribute to his daughter.

Do you think Ryan showed out on this tat? #BlackInkCHI pic.twitter.com/OVPMCvjD4W

We catch back up with Kitty, and she is hanging out with Plug. During the cab ride, she explains the whole situation with Ryan and feels she has been disrespected. 2nd City Ink artist Plug has the terrible idea to vandalize Ryan’s property in retaliation, and Kitty is very reluctant to act in such a manner. Producers give quick glimpses of the damage, and during a green screen interview, Ryan says he has a pretty good idea who caused it.

When someone does you wrong but your friend takes up for you more than you do for yourself!!! 😂😂😂 #BlackInkCHI pic.twitter.com/IXOLE5qnZN

Back at 9 MAG, Bri shows up, and the fellas are stunned at how grown she is. She eventually gets around to inviting them to her party. They explain that even though they haven’t seen eye to eye with her dad, they are still family, and they will attend the party.

Bri said: Y'all need to take YOUR OWN ADVICE!!!! 😴😴😴#BlackInkCHI pic.twitter.com/a1hQx0Q9Cy

We zap to 2nd City Ink, and Charmaine isn’t too happy with Kitty after she shows up late to work. Charmaine wants Kitty to tighten up because the shop has been a mess lately and feels Kitty needs to get it together before she goes on maternity leave. Charmaine runs to the bathroom and subsequently bursts out when she believes she is going into labor and needs to be taken to the hospital.

We later learn that it was a false alarm, and she is on bed rest and sent Kitty to attend Bri’s party in her place.

Speaking of Bri’s party, it was a success, and Ryan, Phor, and Don did show up and kept things civil, which pleased Van. There was one unexpected guest, and it was none other than the. Before she could set foot inside the venue, producers stopped her and told her she wasn’t welcomed and was banned from the show due to her calling Black cast members the N-word. Before she gets back in her cab, she accuses them of “playing the black card.” Before she leaves, we learn that it was Bri who invited her to the party.

Back inside, Van finally gets around to talking to Ryan, Don, and Phor. He thanks them for putting their differences aside with him and showing up for Bri. While Phor and Don seem to have welcomed back Van into their circles’ Ryan reveals during his confessional, he has no intention of rekindling his friendship with Van.

"We ain't rekindling no friendships" 😐

Ryan makes it clear that there are no hard feelings between him and Van, but they aren't about to be buddy-buddy anytime soon either. #BlackInkCHI pic.twitter.com/mhR5IDEHVf

You can peep the reactions to the season premiere of Black Ink Crew: Chicago below as well as the trailer for the entire season below.

Giiiirrrrlll this was JUST the beginning, are you READY for the rest of the season? 😏😏😏#BlackInkCHI pic.twitter.com/6i0OAVr0Wv

Every time Ryan says he never lied to Kit about their relationship status VH1 replays the clip of Ryan telling Kit that they’re in a relationship. 😂😂😂 #BlackInkCrewCHI #BlackInkChi pic.twitter.com/FYnLdzm91t

Van’s 17 year old daughter is more mature than all of the grown ass men on #BlackInkCrewCHI #BlackInkChi pic.twitter.com/N7GOwTiB9g

I would never mess with a nigga like Ryan. Cause whenever his babymother allows him to fuck he’s FUCKING #BlackInkChi pic.twitter.com/RA2mBpPFCi

Why every time a man gets caught cheating they on a “spiritual journey”?? #BlackInkCHI pic.twitter.com/115zCguQVx

Ryan with his fine ass is a WHOLE FUCK ASS NIGGA up here on camera telling her y’all in a relationship but now u fuckin ya bm #BlackInkCHI pic.twitter.com/XJjyV5pqGv

What y’all ain’t gonna do is try to make Kitty look bad this season 😤😤😤 #BlackInkChi pic.twitter.com/AYnJIeR3Kq

Kitty u have bad luck with these black ink men time to move in a different direction honey. #BlackInkCHI pic.twitter.com/k1YRqPSyge

Ryan may be pretty, but he ain't ever done right by a woman on the show, not even Rachel. Any woman who tries that has got to know she's playing with fire. #BlackInkCHI #BlackInkCrewCHI

One day….Ryan is going to meet the love of his life. He’s gonna settle down….give his whole heart to a woman……and she is going to burn the mess out of him. It will be well deserved. #BlackInkCHI pic.twitter.com/UmKxugjIvf

Production petty when Ryan said I said nothing about us being in a relationship production said you not gonna kid when we have recipts #BlackInkCHI pic.twitter.com/WL5VbP7CFl

Was that Lilly we heard? Oh hell know. Bella, I can tolerate – but Lily & her constantly N-word dropping ass – Lily, I cannot!
#BlackInkCHI #BlackInkCrewCHI pic.twitter.com/2VUCBqbw6V

If a man calls you by your government name when you’ve always been called by your nickname….YOU GOT HIM IN HIS FEELINGS SIS😂😂 #BlackInkCHI