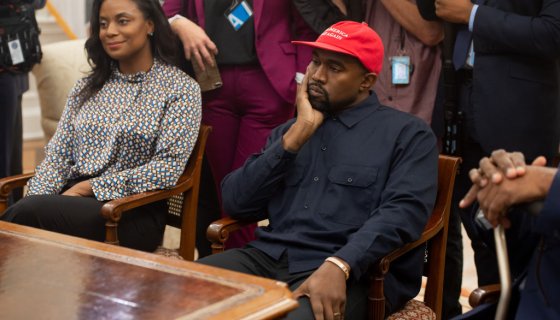 Kanye West is having himself and not in a good way. The sh*t show pushed as a campaign rally is coming back to haunt him, one of the attendees is speaking out.

When clips from Kanye West’s campaign rally began to hit Twitter, one, in particular, stood out. No, we’re not talking about the clip of him sharing that he almost aborted his first child or him claiming Harriet Tubman never freed slaves (Tubman’s), we’re referring to the clip of him singling out a young Black woman in the crowd.

In an exclusive interview with Madame Noire’s Veronica Wells, 20-year-old Iesha M. Daniels opened up about her experience at Kanye’s . In the interview, Daniels explains why she wanted to attend the car wreck waiting to happen. She stated that she is a fan of his music and was curious about what he had to say concerning his presidential aspirations, which he seems to be still going forward with…unfortunately.

When asked what her feelings about what she heard from the “free-thinking” rapper before she got her chance to ask a question was, she revealed there was general excitement around his visit. BUT when he dropped that Harriet Tubman nonsense, that’s when things got weird for her.

“First of all, once again, I am a listener of Kanye West’s music. My friends and I were excited. He came out, we were screaming. We were like, ‘Oh my gosh. This is like Kanye!’ We were pretty accepting of him because he said, ‘This is going to be a conversation. I want to open it up. I want to be a person for the people.’ And then he said the Harriet Tubman comment and that’s when I was like, ‘Ok…’ I go to an HBCU (Historically Black College/University). We’re taught to always make sure we are spreading the right information about Black people. That’s when I felt the need to raise my hand and go onto the stage and either correct him about it or ask another question.”

But what took the cake was how dismissive he was towards Daniels following her important question about gun violence and its impact on Black people. The HBCU student described not being able to hide her facial expressions while he was “answering” her question. Also, his behavior towards Daniels and her question as compared to a white woman who also presented a challenging inquiry was very noticeable. Daniels pointed that out during the interview calling Ye “antiBlack” and claiming he is “perpetrating misogynoir” by calling her angry “Sister Souljah” and attacking his ex-girlfriend, Amber Rose.

“He also said some negative comments about Amber Rose at one point. He went on a rant about how she was a prostitute, and God purged him or her, and then he found Kim and his life is better.”

“And so for me, it’s like Kanye West perpetuates misogynoir, which is the hatred of Black women. He’s antiBlack. And that moment was so clearly a manifestation of all of that. That’s what I made of that whole situation of him being very hypocritical, painting the white girl like an angel, and then painting me as the angry “Sister Souljah” Black girl came her looking to ruin my rally. No, sir, that is not what I was doing.”

Here’s some context for that video and enjoy this thread of ignorant comments Kanye said today at the rally in North Charleston: https://t.co/J78mu0qH9C pic.twitter.com/Z6aW9cLCUZ

Daniel’s closed out her interview hoping and praying that Ye gets the help he desperately needs, BUT she did accurately point out that his mental issues don’t excuse the problematic things he is saying. His wife, Kim Kardashian West — — has since pointing out how hard it is to reel in her husband because he is an adult and asked for privacy.

We hope this comes to a safe conclusion for Kanye and his family.